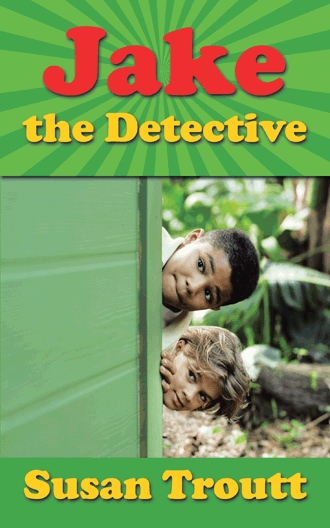 Jake couldn't believe it.  This was the third time this week that something was missing from his desk.  Monday his pencil was missing, and yesterday and again today it was his lunch money.

He peered into his desk slot.

“Jake,” said his teacher Miss Winters, “are you paying attention?”

Jake sat up straight.  What had Miss Winters been saying?  He hadn't realized that she was even talking at all.  “Were you saying something?”

Jake nodded.  His dark hair stuck up at all angles.  He tried to smooth it down.  It bounced back up again.  It was bad enough that he was the smallest kid in his fourth grade class.  Why did he have to put up with bad hair too?

His mind began to wander.  Who could have taken his things?  Mikey had a pencil that looked like his.  So did Callie.  So did Angela.  His pencil had been an ordinary yellow one.  There was nothing special about his pencil, except that it was missing.  Does missing make a pencil special?  It was all so confusing.

Just yesterday, his mother had told him to add something to the grocery list.  Well, anyone who's been in school knows that a list is for spelling words, and that adding is what you do in math.  Why didn’t his mother understand that?

Jake waved his hand in the air, hoping Miss Winters would stop talking so he could tell her about his missing money.

Finally she came to his desk.  “What is it, Jake?  Do you need help with your vocabulary words?”

He shook his head.

It's a BIG MYSTERY when things begin to disappear from Jake's classroom.  How can nine-year-old Jake catch the thief?  His mystery-reading cousin has ideas, but Jake has questions.  Does going undercover mean putting a bedspread over your head?  Is putting a tail on someone like Pin the Tail on the Donkey?  If you catch a thief red-handed, will he have red hands?

Jake's good at following directions.  In fact, he does exactly what he is told, which leads to a lot of mix-ups, a whole lot of mistakes, and a hilarious mixture of merriment.  Add in Jake's bad hair, his short attention span, and his bossy classmate, and you're in for some laugh-out-loud fun.

Susan Troutt, who grew up in , is the author of The How-to Joke, The Child Pirate, and Pirates to the End.  She and her husband now live in with a tuxedo cat named Spatz, a border collie named Mattie, and a sheltie named Rylie.