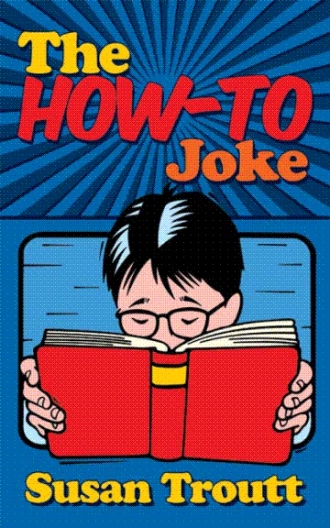 Nine-year-old Jake Carter looked down.  There was water all over the kitchen floor.  He didn't think he'd poured out that much water.  He'd filled the big glass pitcher at the sink, but he'd only poured out whatever it held.

Now the floor was flooded.  I didn't pour water on the floor.  I poured it on the cupcakes.

"How could this have happened?" he wailed, looking at the mess.  "I followed the joke directions."

He tore off some paper towels and began mopping up the water.

When he finished, he said, "Now I need to put the cupcakes in a box and take them to school to show my teacher, Miss Winters."

But the cupcakes were a disaster.  When he tried to pick up the soggy things, gooey chocolate cake gooshed between his fingers and fell onto the countertop in pasty, gloppy puddles, too soupy to handle.

"This wasn't the way it was supposed to happen."

Jake grabbed the red-covered joke book from the chair and tried to find the joke again.  Aloud he read, "What kind of cup won't hold water?  A cupcake!"

Well, hooray!  He had done it right!  He'd poured water on the cupcakes, and they didn't hold water, just like the joke said.

But the cup part was missing from these cupcakes, and in truth, so was the part that was once cake.  All that was left just plain mush!

Jake waved his hands in frustration.  "How can I how-to this joke if I can't figure out how to how-to it?  I don't even know what I'm doing!"

Was it only this morning that Miss Winters had made the how-to assignment?  It seemed so long ago.

Jake chooses jokes for a class assignment, but he mistakes them for directions and tries to prove each joke is true.  He pours water over cupcakes to prove they won't hold water.  He throws his father's alarm clock out the window to see time fly. Poor Jake!  He just can't figure out how to how-to a joke.

As a child, Susan Troutt was blessed with good teachers who introduced her to writing.  When she grew up, she became a teacher, guiding fourth and fifth graders in the love of the written word and helping them find their own true joy in writing.

Now retired from teaching, she lives in with her husband James, her dogs Mattie and Rylie, and a cat named Spatz.  In addition to The How-to Joke, Susan Troutt is also the author of The Child Pirate and Pirates to the End.