TALES FROM THE GRANITE COUNTERTOP 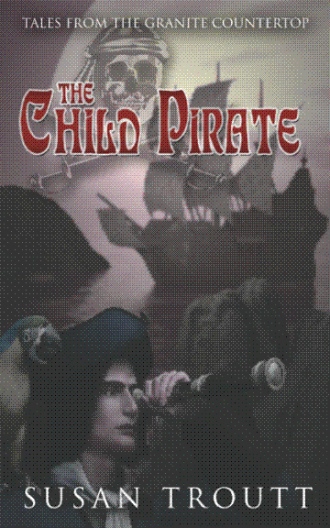 Her long raven hair billowed in the wind, brushing its curls about her face and throat as she stormed angrily down the street.  Close to her chest, she held a tightly wrapped bundle.  Determination showed in her eyes; her mind was set.

When she reached the wharf, her grey eyes searched for someone to hold the bundle while she took care of business.  “You there!  Girl!  Come here,” she summoned.

A girl of about twelve answered her call.  “Yes, Miss?”

“Here, hold this for me.  I shan’t be long.”  She thrust the bundle into the young girl’s arms.

“Yes.  Yes, it is,” agreed the woman straightening her blouse and waist cinch.  “Wait for me in the shade of that tree.”  She directed the girl, giving her a little push toward a large sycamore tree.

The child stumbled slightly but then regained her footing and hurried from the hot, summer sun into the cooler, shady area.

“I shan’t be long,” the woman repeated, calling over her shoulder as she ran along the dock toward the ship.

The restless sea rocked the ship with its waves—high, low, high, low.  The woman ducked and rose with each rock of the ship.

A man appeared on the deck.  Not many men were that slight of build. She recognized him immediately and called to him.  “!  Could you help me please?”

Alvin Mitchell looked up, surprised to see a woman so near the ship.  “Captain!” he called.  “Come quick!”

Thomas McDoogal heard the urgency in ’s voice and took the steps two at a time reaching deck just in time to see the woman struggling to come aboard.

The captain allowed his superstitious indulgences.  The bad luck of a woman on board ship was one of them.  “I’ll handle this, ,” he said, brushing the man aside.  With authority, he strode toward the woman who by now had one leg over the side of the ship and was attempting to control her billowing shirts and raven hair in the wind as she held tightly to the ship, working to maintain her balance.

“Madam,” he called, striding toward the woman.  Before he could reach her, she tumbled, petticoats and all, onto the deck.  She scrambled to her feet, holding her skirts together with one hand.  With the other, she corralled her raven hair which flew wildly across her face.  The ship rocked, throwing her off balance, and as Thomas McDoogal approached, she stumbled into his arms.

“Effie!” he said in surprise.  He held her at arm’s length, appraising her beauty.  She was still as lovely as he had remembered.

Effie assessed McDoogal’s handsome face.  “Thomas,” she said.  Her dark-lashed eyes looked directly into his, drawing him into her beauty.

“How long has it been?  A year?” Thomas remembered their time together last summer.

Tiptoe into your kitchen and look beyond nature’s design.  Yes, there topping the cabinet.  Of course, you say, it’s only a countertop.  But, do not stop there.  Look into the countertop.  Look right there, boys and girls, right under your fingertips, cold and hard in its swirls, chips, and crystals.

Do you see them?  Once you open your eyes, surely you will see the faces.  Why, in the right-hand corner alone there is Queenie Ester, and the Child Pirate.  And look there, just a little lower and see the Child-faced Cat, and Susan the Orphan.  They are trapped there in time.  They can never come out, but always they are changing, evolving.  Each of them can be discovered, and then with merely a swish of a rag, each evolves into something else.

But they are always, always present, for they are each part of a tale from the granite countertop. They have whispered their tales into my imagination, and now I shall share them with you.

In this book we find the story of Briney McDoogal, abandoned as a baby by his mother and thrust upon his father, the brave pirate Captain Thomas McDoogal, and his crew of Gypsy Laddie pirates.  Do not feel sorry for Briney.  He lives a remarkable life, salty with danger and peppered with real pirate adventures as he sails from to the sandy shores of and uncovers mysterious clues for a hidden treasure.  But alas, as you shall soon read, all is not well for Briney.  He must beware, for someone is watching his every move.  Join Briney McDoogal, the Child Pirate, as he and a schooner full of other captivating characters blend imagination with history for a truly a wild adventure on the high seas.

As a child, Susan Troutt was blessed with good teachers who introduced her to writing.  She wrote, and in return, they displayed her stories in the hallway, entered her essays in contests, praised her pieces, and encouraged her to continue writing.  When she grew up, she became a teacher, guiding fourth graders to love the written word and helping them to find their own true joy in writing.

Now retired from teaching, Susan Troutt lives in with her husband James.  She has three children, Wendy, Christopher, and Patrick, two dogs, and a cat and is allowed to write and share the magic of words to her heart’s content.