Cheniere Caminada And The Tidal Wave of 1893 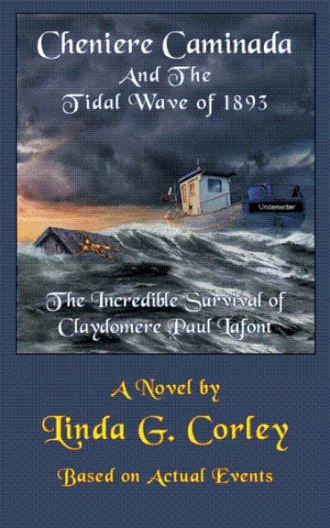 THE RESCUE OF CLEDEMERE LAFONT

On 8 October 1893, the pilot boat Underwriter was making a concerted effort to get back to New Orleans as fast as possible. Captain Lyons looked down at the man sleeping on the bunk. He shook his head and marveled at the great fortune Underwriter had in being the boat to find the young Claydomere Lafont.

The 14-year-old boy was suffering from dehydration, sun exposure and hypothermia. Captain Lyons stayed with the boy for hours, not leaving his side.

"Don't you think you ought to take a break? He isn't going anywhere," said the cabin boy James.

"I know, James," the Captain said. "I would just like to be here when he wakes up."

The Captain started for the door when he spied a movement from the bunk. Turning toward it, he saw the young boy's eyes flutter and barely open.

Startled, the Captain jumped back.

"Wake up! You're on the Underwriter. You're safe!" Captain Lyons shook Claydomere's shoulders gently.

Opening his eyes a little more, the young boy sighed with relief when he saw the Captain. He turned his head to the other figure in the room and the cabin boy came into focus.

"I am Claydomere Paul Lafont ... the son of Charles and Melina Lafont. I am 14 years old ... and was swept out to sea during the hurricane that struck Chénière Caminada. Do you know if my parents ... have been found?" Claydomere asked.

"No, I have no information on the Lafont family," the Captain replied.

"How many days ... have I been on the ocean?" Claydomere asked.

"Eight days," replied the Captain. "Try not to worry. Save your strength. We will find your family soon."

The next morning, in a conversation from his bed, Claydomere tried in vain to hold back tears as he described eight days of terror and miracles, surviving a storm officials say killed at least 800 people in Chénière. There were many extraordinary stories of rescued survivors from the hurricane. However, this story about the young son of Charles and Melina Lafont, tore at the heart of the Captain.

Upon his rescue, on the 9th of October 1893, eight days after the storm, Claydomere Paul Lafont told Captain Lyons of the pilot boat Underwriter, the following story.

"At about 5:00 o’clock on Sunday afternoon, the first of October, the tide rose and the first large waves started hitting Chénière’s beaches and flooding the island. By 7:00 o’clock the water had risen to eight feet, then higher when the giant tidal wave came in. The water came up 16 feet deep on the high end of the island."

"Where were you located on the island?" the Captain asked.

"I was with my family in the home of my uncle Alexie Terrebonne," Claydomere replied. "It was a sturdy structure and held the families of another uncle, Manuel Terrebonne, and my mother and father Charles and Melina Lafont, as well as my sisters and many other neighbors," said the 14 year old boy. "Uncle Alexie’s house was five feet off the ground and well bolted to the ground but began cracking at every joint and swaying after every splash of the surges. All were standing and shivering in terror while waiting for the inevitable to happen. Near midnight, the wind died away, the waves lulled, and a dead calm reigned. Thus, six terrible hours of anxiety and suspense had finally passed away."

"How much water had entered the home, at this point?" asked the Captain.

"There was six feet of water in the house," replied Claydomere. "During the lull, brave, sturdy men went out in skiffs and rowed from house to house, taking in such of the inhabitants as had escaped the first onslaught of the tempest. Many of these people sought shelter in two or three houses known to be solidly built."

"This proved eventually their salvation, that fearful night, I pray," said the Captain. "Did your family try to reach higher ground?"

"During the lull, Uncle Manuel and Uncle Alexie suggested that everyone should board Alcide Pazzani’s boat and that it could be tied securely to the oak trees next to the old home of now deceased Raphael and Clamonce Rigaud Landry," Claydomere replied. "They attempted to reach the boat but it was too late. The rising tide and the rapid current forced them back into the house. The Pazzani boat was brought far up the front veranda with the bow almost in the doorway. The men were now frantically passing out women, children, and men into this open boat for a possible sea voyage through the surfs of an angry Gulf. My family did not go with them."

"That small boat would not be sturdy against such a storm," remarked the Captain.

"Well, in a short while the huge waves pushed the loaded boat off into the Gulf. In the deeper water the first few waves swamped the boat and turned it over several times. Fifty four persons were in Pazzani’s boat when it was blown out into the Gulf. Only four of those people survived. Uncle Manuel was one of them."

"Those poor souls," the Captain said bowing his head.

"Uncle Manuel entered our home half-crazed and hysterical. ‘Half of the island has been swept away!’ he shouted. His wife Cora and daughters Josephine and Alice and all his other children were lost. Their boat had capsized and they were all swept beyond reach into the darkness before he could do anything. He was thrown into a tree and that saved his life. My Uncle Manuel cried hysterically, ‘My God, I am without my wife and children! Where shall I find them?’ I knew then that there was now more than fear to confront," Claydomere said.

The author’s 6th novel offers us an intimate look at life and hardships in a small fishing community on the in 1893.

Hit hard by tropical storms and hurricanes, the community suffered many losses, not just of their property and family, but of their innocence. The had a population of 1600 on October 1, 1893. The next day half were gone.

The legacy left by the people of Chénière is a proud and courageous one. Chénière, before the 1893 storm, was a special place, not just because of its picturesque setting and colorful history - it was the living monument of a people’s pride - the identity of the people who lived and worked there.

There was a wild beauty about this place where waves rolled with haughty grandeur against the sandy shore. One day that wild beauty went horribly awry when the sea suddenly swept in over the land, then rushed out again with a terrible force, taking people with it.

There were many stories of survival, each one more horrible than the last. One, in particular, of a 14- year-old boy who experienced an 8 day ordeal on a raft so terrible that one can only imagine bow he survived so long without food or water, will break your heart - not only for the reality of the tragedy, but for the way in which it is told to the reader.

A beautiful compelling story of loss and redemption and the complex destructiveness of grief set against the Reconstruction Era in the South after the Civil War. It is a story of devotion and discovery, belief and trust, but above all - love - the love between one very special soul and another.

The author was born in , and raised in Golden Meadow, - on the banks of Bayou Lafourche near the .

For 20 years the author worked in the field of Human Services, mostly as a Mental Health Counselor and Social Services Program Director in the area. She holds a B.A. degree in Psychology with graduate work in Psychological Counseling from and a Ph.D. in Human Services from - .

The author avidly studies genealogy to learn more about her family history and to enhance the authenticity of her fiction. Both parents offer interesting ancestry; her father part Native American Cherokee from and her mother’s ancestors came over from .

Historical Fiction is her favorite genre. While her career has been focused on dealing with academics, her interests have ranged far beyond the classroom and include a love of the paranormal, the exploration of space and the search for extraterrestrial life - along with some simpler pursuits such as genealogy and photography.

She is the author of six novels on the folklife and folklore of South Louisiana Cajun Country. Her novels have been called exciting, shrewd, fresh, original, intricately woven, totally original, and beautifully crafted.

Linda took stories told to her by her maternal grandparents and 23 years later turned them into unforgettable evocative novels. Her novels convey the heart and soul of the area in times past; having them told now is a remarkable act of scholarship and love.

Linda brings all of her characters to life while showing us an up close glimpse of the days before cars and electricity, before modern medicine, and before industrialization. Her novels are also stories about the author’s ancestors. Discovering her roots has been a revealing journey for Linda and one she shares eagerly with her readers.