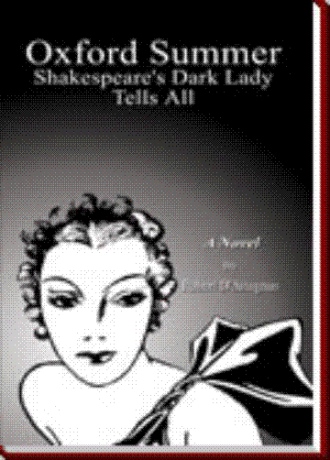 No one now living knows the full truth about the notorious Dark Lady of the Shakespeare Sonnets.

That she was temptestuous, fiery, haughty and a devourerer of men...all that comes through clearly enough in Shakespeare’s Sonnets about their stormy love affair. That she had a devastating effect on Shakespeare and his friendship with the young Earl of Southampton once the three of them became entangled in their sizzling, tormented love triangle, which was to become perhaps the most celebrated in all of literature...of that, there seems to be no doubt.

As for the rest...the times, the places, the circumstances...all is lost in a fog of uncertainty and ambiguity. The sonnets seem to take place on an island of emotion and passion with no visible connections to the normal Elizabethan world. The identity of the Earl of Southampton is only a strong conjecture, based mostly on evidence external to the Sonnets but with a few internal clues to lend support to the conclusion.

We do not know who the Dark Lady was, though there have been many guesses. Even the term "Dark Lady" is one that is not found even once in the sonnets, nor in all the works of Shakespeare. The appellation is one given by Shakespearean critics, which seems to sum her up rather aptly. It suggests the mystery of her unknown identity, her physical appearance as touched on in the Sonnets, as well as what seems to have been the nature of her actions, at least as Shakespeare saw and suffered from them.

Shakespeare blamed her for everything. His own suffering at her hands followed by her double betrayal of the young Earl and himself, which drove him to the brink of madness and left his life in a state of excruciating crisis. She is portrayed as faithless, heartless and a sexual libertine who scorned and laughed at all normal social conventions.

But is that a true and fair picture of this fiery lady so apparently doomed to be irrevocably hidden in the mists of poetry and history?

What if she had the chance to tell her side of the story?

What surprising revelations might be found there...about herself and Shakespeare and the Earl of Southampton...about time and circumstance and love and betrayal and theater and literature.

What if this were the manuscript she left...the so-called Dark Lady’s own story in her own words...

...from the Journal of Anne Dubois,

This story has a story behind it, as most stories do.

And perhaps even another story behind that...

But as for me I can only tell what I know and as I came to know it...

Which began for me one sublimely lovely drowsy spring day of the year of our Lord 1593...at the house of my cousin, Anne, whose full name is Anne Vavasor Lee.

They had told me often enough how like I was to Anne, which tended to irritate me greatly. Why not? If my cousin Anne was in her late thirties, or maybe even forty, while I was only twenty-two. Would being compared to someone twice your age appeal to you? Well, it did not to me. It was bad enough my parents had named me after her...

Still, other than that, Anne was not too terribly objectionable.

Her husband was stuffy and insufferable, yes. I think even Anne, in the secret recesses of her mind, would agree to that. But his saving graces were twain...one, he was rich...and two, he was mostly away.

Her country estate not far outside the town of Oxford and so not far away from me was delicious. That alone was enough to attract me. To wander over its unimpeded acres was like giving me a geographical review of my own philosophy. Which was to always leave yourself a lot of room to roam, and not be hemmed in too closely by anybody.

I never expected to meet a man there in her environs who would eventually become so important to me.

Much less did I expect to meet two such men...

But that is exactly what happened.

Perhaps nothing in all of literature has caused such controversy as the Dark Lady of the Shakespeare Sonnets.

How did she meet Shakespeare?

How did their romance go wrong?

Who was the young friend, the third corner of the famous love triangle?

What was the effect of that romance on Shakespeare as a person and on his subsequent writings?

The Shakespeare Sonnets give us only a single point of view, and an incomplete version of the story.

This novel gives something never before examined. Exactly what happened and when and why . . . through the eyes of the Dark Lady herself.

What’s in a name?

In this case, Robert D’Artagnan is the author of a dozen novels, while Randall Barron writes strictly nonfiction books. Randall Barron has published various articles in the Shakespeare-Oxford Newsletter and has addressed Shakespeare conferences in the United States and England.

He has a website expressing his views on the Shakespeare Authorship Question plus three previous books on the subject. Those are The Great Shakespeare Hoax, Shakespeare + The Queen, Shakespeare Through the Looking Glass and a novel, Against This Rage, the last under the pen name of Robert D'Artagnan. All are available through 1stBooks.

As to his Shakespeare research, he is most proud of having pointed out on his web site and to the audience at Concordia University where Shakespeare himself declares he is a knight, and of his investigations into Love's Martyr, an enigmatic and obscure book published in 1601, which he believes is another important key to understanding The Great Shakespeare Hoax.

He and his wife, Gloria, also were the first to discover and call attention to the INQUISITION POST MORTEM of Edward de Vere in London, in 1992 . . . de Vere being now for many the True Shakespeare.

Email the author at