Who Are You Calling Little Shrimpy? 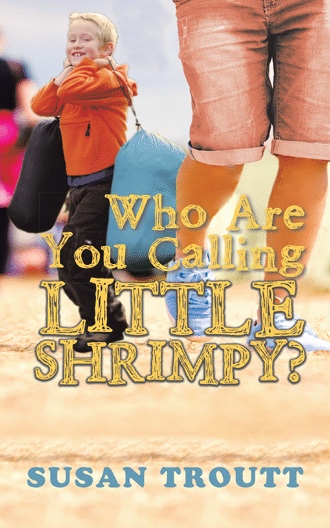 Jake Carter had three problems. The first was his hair. It grew straight up. Even when he tried to smooth it down, it stuck up. He’d gotten so used to it that he guessed straight-up hair was okay. It made him look taller, and he needed all the tall he could get. That was his second problem. He was always the shortest kid around. Sometimes girls treated him as if he were a baby. They bossed him around and acted as if being short meant he didn’t know anything. Jake had always been short and had always had straight-up hair. Standing next to babies made him look taller, and wearing a hat hid his straight-up hair. But the third thing—his wandering mind—needed attention. Someone would be saying something, and all of a sudden, his mind would sail away like a helium balloon in the wind. Off it would go, wandering the world, thinking about new ideas. Jake’s wandering mind took over when his parents loaded him into the car with his things for camp. “Mom, Dad, what will camp be like? Where will I sleep? What will I eat? What if I have to find my own food? What if all I can find is worms? What if I don’t like worms?” “Everything will be fine, Jake,” said his father. “You won’t have to eat worms.” “You’re going to have a great time,” assured his mother. Before he knew it, they were at Camp Wildwood. Jake looked up at the huge pine trees and blue sky and felt smaller than ever. All of a sudden, his wandering mind had an idea. Camp, with its fresh air, was a good place to grow taller. Surely if he filled his lungs with fresh camp air, he’d inflate into a taller version of himself. He waved goodbye to Mom and Dad and ran off to join the other ten-year-olds. His camp counselor, a college-aged boy with close cropped hair, a white-toothed smile, and a great tan, said, “I’m Tanner.” Jake noticed that Tanner was indeed tanner than everyone there. Tanner pointed to a circle of four benches. “Leave your gear here, and go over to those benches.” As Jake walked to the benches, an idea popped into his head. If he stretched his toes, it might make him taller. He sat down, ripped off his blue-laced sneakers, and began pulling. Suddenly, a shadow fell over him. He looked up—he looked way up. A kid twice Jake’s size stood over him. He had shaggy hair and wore orange shorts and bright blue sneakers. The kid stared down at Jake. Jake pointed off in the distance. “The older unit’s over that way. This camp unit is for ten-year-olds.” “I am ten years old!” huffed the big kid. “You’re older than that.” The big kid laughed real hard. “Me? Older?” Waving his arms to get the other campers’ attention, he called, “Hey, everybody! This little shrimp thinks I’m older than you guys!” Jake looked up at the big kid. “You’re not older?” “Naw! I’m ten just like you. Now move over, and let me sit down, Little Shrimpy.” “Who are you calling Little Shrimpy?” Jake asked in a small voice. He looked around and noticed he was the smallest kid there. “Oh. It must be me.” He stood up. The big kid settled in his place. “Now where am I supposed to sit?” moaned Jake. The big kid made room for him. He patted the spot with his big hand. “Sit here, Little Shrimpy.” Jake sat down—right on the big kid’s hand. The big kid screamed. “Ow! Ow! Owww!” Jake jumped up. The big kid dangled his hand in Jake’s face. “You broke my hand! Look! My hand is broken!” The big kid’s hand just swung there. “Oh, no!” said Jake. “We should have one of the camp counselors look at it!” The big kid looked around. He lowered his voice to be sure no one else heard. “That won’t be necessary. Hand’s broken, but I’m a fast healer. It’ll be well in no time.” “Okay,” said Jake skeptically. “Just kidding,” announced the big kid. “Ha! I was pulling your leg.” “Pulling my leg?” asked Jake. He looked down to see if one of his legs had been pulled longer than the other. The campers romped here and there, noisy and restless to get started. When Tanner stood in front of the group, they settled down. “Welcome to Camp Wildwood. Our unit is called the Pines. For those of you who don’t know, I’m Tanner,” said Tanner, smiling a white-toothed smile. Jake chuckled to himself. “He keeps talking about how tan he is.” The big kid looked down at Jake. “Geez, Little Shrimpy! Tanner is his name, not his skin tone.” Jake wanted to tell the big kid that his name wasn’t Little Shrimpy, but his mind wandered away. It was hilarious that Tanner’s name and his skin tone were the same. Tanner interrupted Jake’s thinking. “Let’s go around the circle and introduce ourselves. If you have a nickname you’d like to be called, let us know.” The big kid said, “My name is The Farman.” He said it like it had sparkles around it. “And this is my little buddy, Little Shrimpy.” Jake said, “No, wait. My name is J—” The big kid threw his large, flabby arm around Jake’s bony little shoulder, almost pushing Jake through the bench itself. “Naw. Your name’s Little Shrimpy.” “Hey, Little Shrimpy!” called one of the campers. Then another one said the same thing. Jake frowned and stubbed the toe of his sneaker in the dirt. This was serious business. He wasn’t a shellfish. His name wasn’t Little Shrimpy. Maybe it would be different if he were taller. Yeah, if he were taller, they’d probably call him Big Shrimpy.

Get ready for some wacky fun with Jake, the shortest kid at Camp Wildwood. Stretching like a human rubber band or dangling from trees might make him taller, but if his arms stretch, he’ll look like a chimpanzee. In the meantime, a kid twice his size nicknames him Little Shrimpy. That’s not a name; that’s a shellfish. But the name sticks. Jake gets in the camp spirit by soaping cook pots inside and out, making paper fire houses to start campfires, and whomping crickets with cricket bats. But there’s no escaping those campfire ghost stories and the on-the-loose camp ghost. Floorboards creak, beds bump, the big kid goes missing, and Jake, in all his innocence, becomes the prime suspect. You won’t believe how things turn out in the very uproarious Who Are You Calling Little Shrimpy?

Susan Troutt is a former teacher who taught students to find true joy in writing. She began her writing career at the age of fifteen as a guest columnist for a local newspaper in Louisville, Kentucky. When she is not writing, she can be found hiking, reading, Jazzercising, doing paper crafts, or camping. She and her husband live in northern Kentucky.