Pirates to the End

Tales from the Granite Countertop 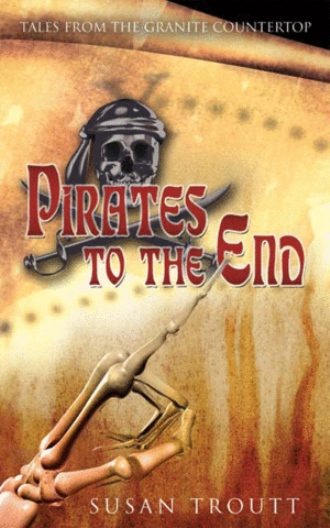 Briney McDoogal threw an arm across his eyes to block out the searing sun and clung to the wooden raft, riding the pull of it back and forth over the waves.  Then its bottom scraped sand.

He turned his head to the side and watched the drifting tide.  When he looked back to shore, something shiny caught his eye--first one glint, then another.  Focusing on the glistening sand, he propped himself up on all fours. But the sand wasn’t sand anymore.  It had become jewels—rubies, sapphires, brilliant green emeralds.  At his feet, just past the tide’s lapping tongue, lay a gigantic mound of gold doubloons.  Beyond that, strings of pearls washed up, one after another.

Were his eyes playing tricks on him?  How could the sea hold such beauties?  Well, he wouldn’t waste time worrying about it; he would collect as much of this treasure as possible.

Leaping from the raft, he grabbed handfuls of doubloons and stuffed them into his pouch.  When his pouch could hold no more, he filled his pockets, then piled glorious gems inside his shirt until he’d run out of room.

But alas, he could not take all the jewels!   Yet he wanted them all.  Each one was so beautiful.   Surely they were meant just for him, but how could he carry them from the island?

The raft!  Of course, the raft!  Gleefully, he layered strings of pearls about his neck and wrists, scooped up great handfuls of sparkling gems, piling them high.

From a distance he heard a voice calling.  “Captain!”

He had jewels enough for this trip.  Already his raft was heavy with these riches, all of which belonged to him.  He would return later for the rest.

Putting his entire weight behind the raft, he guided it, pushing it with all his might toward the sea.  But now the raft was heavy and clung stubbornly to wet sand.  Awkwardly he coaxed it onto a wave, but it

Briney McDoogal is captured, tried for piracy, and condemned to die.  He admits he’s made mistakes.  Appointing himself captain of the Gypsy Laddie is the worst mistake of all.  What does a fourteen-year-old know of being captain anyway?  Is belief in himself all he needs to survive?  Or will foolish determination be his downfall?  Cryptic clues lead to Blackbeard’s treasure, but, blinded by bravado, Briney’s naiveté tosses him to cut-throats, thieves, and finally Blackbeard himself.  On the brink of obtaining treasure, Briney must make a decision.  Choosing unwisely endangers his ship, his crew, and his life, but if he accepts the Pirate’s Pardon, his dreams of riches vanish forever.

PIRATES TO THE END, an imaginative adventure interlaced with historical high sea piracy and overflowing with trickery, ghosts, masquerade, and murder, is an 18th century clue-filled treasure hunt that will delight children and adults alike as it spirals from ’s Castillo, to ’s St. Phillips Church, through the pirate haven of , , and retires on ’ sandy shores.

Susan Troutt is also the author of The Child Pirate.  She lives in Northern Kentucky with her husband, her two dogs, and a cat.