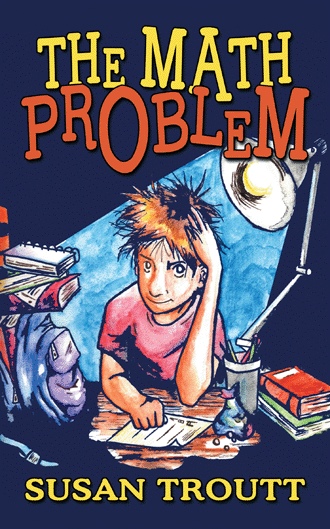 Other kids’ hair grew out. Jake Carter’s dark hair grew up, straight up. He tried to smooth it down. It bounced back like porcupine quills. He thought maybe it was because he was excited.
He didn’t want excitement. He wanted luck. He put on his green good luck sneakers. Everything was better when he wore those sneakers.
This was the day Jake had been waiting for for weeks. In only a moment his teacher, Miss Winters, would hand him his report card. And oh, boy! Then he’d collect his reward.
He tried to be patient. He folded his hands. He twiddled his thumbs. He thought about the promise his father had made.
“If you get all A’s and B’s on your report card, I’ll take you to Wild Woolly’s Amusement Park.”
Jake could hardly wait to go to Wild Woolly’s! Well, it wasn’t just Wild Woolly’s. It was that new roller coaster, the Roaring Rowdy. He was probably the only kid in fourth grade who hadn’t ridden it. After Dad’s promise, riding that coaster was all he could think about. That was why he’d worked so hard in school.
When Miss Winters walked toward his desk, butterflies twirled in his tummy. He put his hand there to calm things. He swallowed hard. He squeezed his eyes shut.
Oh! There, in his imagination, was the Roaring Rowdy. He could actually hear the safety bars clicking into place. Click! Click! Click! The blue, green, and red roller cars clunked along the tracks, whamp-a-chunka, whamp-a-chunka, to the top of that first rise. Then oh, what a thrill!
The coaster zipped downhill. He threw his hands in the air, waving frantically, as if he were really riding the Roaring Rowdy. “Eeeeee!” he squealed. “EEEEEEEE!”
“Jake! Jake, are you all right?”
Jake’s eyes flew open. There stood Miss Winters.
“Huh?”
“Is everything all right?”
Jake looked around. His classmates were staring at him.
Quickly he put his hands down. He refolded them on his desk. “Yes. Fine. Yes.” Everything was all right. He felt foolish, that’s all.
He looked straight ahead.
Someone giggled. A few more kids laughed out loud.
He wished he were invisible. Was that possible? No. He could see his hands. That meant he was still here. His cheeks turned an embarrassed shade of pink. He glanced down at his green sneakers.
When his eyes came back up, everyone was looking him.
“I’m fine,” he said. He pretended to clear his throat. “Eee. Eee. Just a little mouse stuck in my throat, that’s all.”
Miss Winters gave him a reassuring smile. “Here’s your report card.”
“Thank you, Miss Winters,” Jake said politely.
Slowly he drew the report card from its envelope. He saw an A in Reading. Well, of course he’d get an A in Reading. He was a very good reader.
Spelling was an A too because he was good at Spelling.
There was an A in English. He always got A’s in English.
Science was an A. So far, so good.
He ran his finger down the page to the next subject. Social Studies. He wasn’t very good at Social Studies. This might be bad. He was afraid to look. He covered the grade with his finger. Then curiosity got the best of him. He forced his finger away. There it was. B in Social Studies. B!
“Wild Woolly’s, here I come!” he whispered.
“Psst, Jake!”
Jake looked up. Angela Martino was leaning over him. Her hair hung in long curly ringlets down to her shoulders.
“Let me see your report card,” she demanded.
Jake quickly closed the card. “No. I haven’t finished looking at it yet.”
“I’ll show you mine if you show me yours,” said Angela, flipping her dark curls. She plopped her report card down on his desk. “I have all A’s.”
“But . . .” protested Jake, but it was too late. Angela already had her hands on his report card.
“Jake,” said Angela in her know-it-all voice, “you did pretty well. A, A, A, A. Uh-oh! What’s this? Mmm, Jake! You are in so much trouble!”
“What? What is it?” Jake reached for the card. Angela held it out of his reach. She was tall, and he was the smallest and youngest kid in the class. Even at a stretch, he couldn’t reach the report card.
“Give it to me!” he squawked, jumping up and down. “I know it’s not bad! It’s a B.”
“No, Jake. It’s worse than a B.”
“Stop teasing, Angela.” Jake was angry now. “I know I got a B in Social Studies.”
Angela buried the report card behind her back. “That’s right, Jake. You did get a B in Social Studies.”
“I’ve gotten B’s before. They’re good grades. There’s nothing wrong with a B.”
“No, Jake, but what about your. . .” said Angela plunking the report card down on Jake’s desk, “. . .Math grade? Huh? What about that?”
“My Math grade?” Jake thought he’d done pretty well in Math this quarter. Why did Angela have to keep teasing him?
Angela stabbed her finger at the Math grade. “How are you going to explain THAT?”
Jake’s eyes followed Angela’s finger. Suddenly, his Math grade looked all big on the page. Big? It was HUGE! And it wasn’t an A or a B. It was an F. His math grade was a big HUGE F!
“Oh, no! How could this happen?”
“Look what Miss Winters wrote.”
Jake read: “Jake does not understand Math concepts. He needs extra help. I suggest a tutor.”
Angela shook her head and tisked. “Mmm, Jake, you are in so much trouble!”
Jake slumped down in his seat. “Oh, no!” he wailed. “I am in so much trouble!”

Jake has a problem—a BIG Math problem. A teenage tutor comes to his rescue, and that’s when the fun begins. His eagerness to show what he’s learned turns into trouble—especially for know-it-all Angela.
Jake gives his teacher Miss Winters a bouquet of poison ivy and steals the show with his wacky Math rap. Pretty soon, marbles are rolling under his teacher’s feet, and students are shedding their clothes. But when Jake brings a sword to school to teach division, not-to-be outdone Angela, with scissors in hand, shows him how division is really done.
With chaos in the classroom and Jake’s gravity- defying hair, who knows what will happen next in the very hilarious story of THE MATH PROBLEM.

Susan Troutt is a former teacher who taught students to find true joy in writing. She began her writing career at the age of 15 as a guest columnist for a local newspaper in the Louisville, Kentucky area.
When she’s not writing, you can find her reading, hiking, Jazzercising, or walking her two dogs. She and her husband live in Northern Kentucky.
Susan Troutt is the author of three books from the Tales From the Granite Countertop Series: THE CHILD PIRATE, PIRATES TO THE END, and NOT AS IT SEEMS, and two other books from her Jake series: THE HOW-TO JOKE and JAKE THE DETECTIVE.