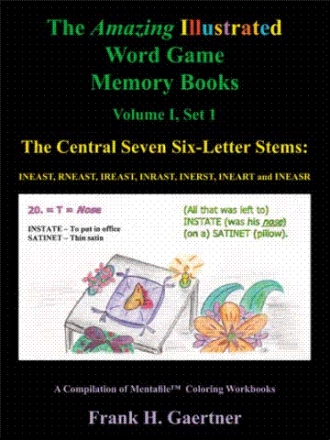 I made up little stories, illustrated them, and found that the more ridiculous, obnoxious or emotionalized I made the stories and illustrations the easier it was to remember the desired words. For example, for the six-letter-stem INEASR, and for the first three words in that list, (ARCSINE, ARSENIC, and CARNIES), I made up a story about Ma, divining from an equation involving an ARCSINE, that she is to use ARSENIC to kill all the CARNIES in town. As will be described in more detail later, and as explained in great detail in the Lorayne and Lucas book, Ma is a code word for the number 3 and the letter C. So, when I drew an illustration to represent the story, I made sure that a matronly woman called Ma was a prominent feature. Having drawn the illustration, the picture of Ma mathematically divining from the ARCSINE of a trigonometric equation that she is to kill CARNIES with ARSENIC became fixed in my mind. Also fixed were the seven-letter words in the story associated with the picture. 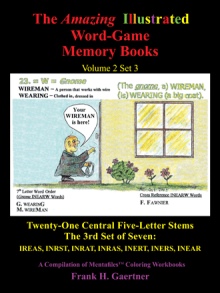 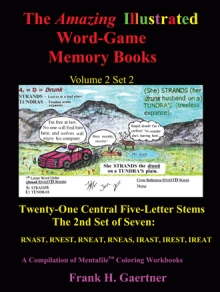 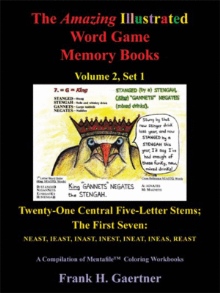 If ever you have been humiliated playing word games, wondered how some players seem to pull seven-letter words out of a hat, questioned what your favorite game words meant, or simply could use a humorous, mentally stimulating way to rapidly recall key bonus words, then this book is for you. This volume organizes letters in groups of six, the so-called six-letter stems, according to those most likely to lead to seven-letter bonus-scoring words. The letters of the six-letter stems; INEAST, RNEAST, IREAST, INRAST, INERST, INEART and INEASR, are ones that are highly likely to show up in scrambled array in a word-game-seven-letter hand, and are the ones most likely to generate seven-letter bonus words. For example, add any letter, except J, Q or Y, to INEAST and one or more of the seven-letter words in the official word-game lexicon show up, but of course you have to know them and quickly unscramble them to be able to use them. In this volume these words are mentally filed for instantaneous recall through the use of coded, dramatically humorous stories and pictures. Active participation on the part of the reader in the form of reading, reciting, writing and coloring is used to trigger memory traces in both the right and left-brain. Mental visualization of pictures is used to reinforce photographic memory. And the humorous, dramatic or sometimes politically incorrect stories that go with the pictures are used to reinforce emotional memory traces. In addition the stories and the seven-letter words that go with the stories are organized according to an alphanumeric code that helps create a mental filing cabinet for rapid retrieval of the words in question. A method of play that will further increase the chances of forming bonus-scoring game-words is also given.

Frank H. Gaertner is a retired scientist and the author of over 50 research publications and patents in microbiology, biochemistry and molecular genetics. He received a Ph. D. in 1966 from Purdue University, was a laboratory scientist and teacher at the University of Tennessee, senior scientist at the Salk Institute, cofounder of Mycogen Corporation in San Diego, and retired in 2002 from a division of Dow AgroSciences in San Diego with patents and publications on cytokine augmentation of the immune system. The present volume is a radical departure from his earlier work, and is the first of an intended lifelong series that should at minimum include the remainder of the top 11 six-letter stems (RNEOST, EREAST, INEOSR and INEOST), some key complementing seven-letter stems, and the 21 complementing five-letter stems.