Sailboat Cruising Can Be a Breeze 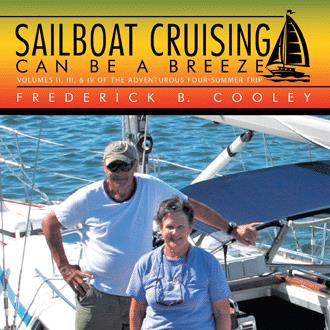 Along the way, we remembered it was our US Independence Day, and planned a dinner celebration. We had already given Emily her Green Hat award, something my wife and I invented for the greenest member of the crew, to replace the international date line ceremony observed in mid-Pacific. Emily’s hat commemorated both her trip and reaching the 48th parallel of latitude. Approaching small ports like Cheticamp are such fun – the mayor of the town is also the dockmaster who collects fees from cruising boats, so by the time we docked he was waiting at the dock for us, and very helpful too! Late afternoon light lovely….we’re docked just to the right of the tricolor building in the photo (below), same tricolor as evening photo above from the land side. Cheticamp (NS) to Charlottetown, Prince Edward Island (PEI) The now seasoned group of sailors, after five whole days, decided to sail northwest to PEI and work their way around clockwise to Charlottetown, the point of debarkation for the crew. None of the ports going down the west side of Cape Breton looked like rewarding spots to visit, so we headed for Souris, in the southeast corner of PEI. On the way, we tried the new North Sails Code Zero, a form of gennaker. For light winds, with a “sock” to control it, it is a marvel. It adds 2-3 knots of speed, behaving like a very large jib or genoa. I believe the wind speed shouldn’t exceed about 7 knots with this light air sail, and we took it down at that point. You can usually tell a cruising boat because you will see such things on the deck as: charcoal or propane grill on rail, folding bikes locked to a stanchion, gasoline in red container, diesel in yellow, RBI (rigid bottom inflatable boat) towed, suspended by davits, or on the transom. We had Easydavits installed in Lake Champlain: the side of the dinghy could be clipped into the two receiving davits attached to the transom, then we could flip the dinghy up with a line I attached to the outboard side so it rests properly against the transom for storage. Arriving at Souris, we found a small number of lonely people – and merchants – pining for visitors, so we had unusually good assistance and a request to stay longer, at no slip charge. Thank goodness they maintain the wonderful old lighthouses, complete with Fresnel lens and a winding stairway to the top. Boudica was parked near a large container ship without any problems. The jellyfish fascinated me. They are difficult to photograph since the camera tends to focus on the water surface instead of the translucent animal slightly beneath the surface. And still another lovely little town – we were getting spoiled! Exploring an old coastal town, with an easy walk, exposes us to fascinating old stone churches, often with a fair amount of area history in posters, books, or art. And ports produce people like sailors who want an audience for their story, e.g., “my wife died 10 yrs. ago, so I built this 42’ ferrocement hull, spent five yrs. with friends making a sailboat (ketch) out of it, and then sailed around Newfoundland. If you like, I can make a copy of the DVD showing the trip.” I liked, he did, and I sent him a copy of my first book about the trip as a quid pro quo. Next stop: Montague, no particular relationship to John Montague aboard our boat. We had to be especially careful in this shallow river going up to the small harbor since there were many fish farms – rows of nets surrounded by a fence inside of which salmon, trout, or other species grow, get harvested, sold. The ubiquitous fishing hull is utilized both for commercial use and fitted out for pleasure. An audience is watching and listening to a decidedly local folk group in the town park across the river. Simon Cowell is unlikely to invite that group of “singers” to compete on his TV show. We left the next morning, later than we meant to because of the distance to Tim Horton’s for breakfast, then realized what a strong east tail wind we had as we raced down the river. It was still peaceful but windy until we got out in the ocean and found a pretty good swell. Heading south to clear the east end of PEI, we turned the corner to the west and found we had a long slug into the wind ahead of us. The afternoon lull motivated me to turn on the engine, because I did not want to arrive in another new harbor at midnight. Once again, we were reminded how geographically big this part of the country is. As we got to the harbor entrance buoy about 7 PM, feeling like we’re almost there, we saw that we had 15 miles of bay to cross before getting to the narrow entrance to the inner harbor of Charlottestown; that means at least 2 hrs. travel to sailors. Fortunately, it stays light late –we saw another spectacular sunset, and took photos at ten PM, reminding us how far north we are relative to our usual sailing grounds. Shortly after this, we were snugly tied up, and the only surprise in the next 24 hrs. was waking up to the sight of a Carnival Cruise Line giant berthed upstream of us, demonstrating that the water depth was indeed adequate. It also reminded us to avoid any area of town that even looked like a possible tourist attraction, since a few thousand cruise liner passengers overwhelms most smaller port towns, although presumably good for the merchants. John, Roger, and Emily left that morning, and we were suddenly back to being a twosome for whatever adventures remained. 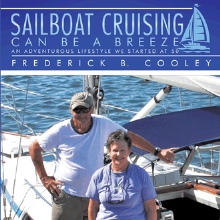 Sailboat Cruising Can Be A Breeze
Frederick B. Cooley
£19.34

As volume I emphatically stated, cruising is an abundant and affordable lifestyle and can be done in short-time segments, whether summers, vacations, whatever. There are delightful people to meet; wonderful, welcoming ports in which to stay; and astonishing beauty not available to the nonboaters. The companion, volume I, is available at AuthorHouse and other booksellers but includes a great deal tangential to the actual cruise, like how we got into sailing. Volumes II to IV miss only the Long Island–Hudson River portion. Everything from the trip, starting in Lake Champlain and going south to the Erie Canal, then west and north to Lake Ontario, for reasons spelled out, then getting to the St. Lawrence is included in this second book, and it doesn’t end until the trip is completed, with a startling ending and what we did next, after going as far north as Newfoundland. There are over two hundred color photos, most taken from the deck by the author/helmsman.

The author is a psychologist, sailor, and wooden boat builder. He and his wife have been to one-hundred-plus ports in the United States, Canada, BVI, and Greece since their start of cruising at age fifty. Their four-summer cruise took them 3,400 miles out the St. Lawrence and down the Atlantic Coast. They currently sail a 1982 Bristol 41 but will not leave the fresh water of the Great Lakes for reasons known only to the readers of the new book. We hope more of our grandchildren, ages twelve to seventeen, will join us on the lake cruises. That’s why we got a bigger boat, with eight possible berths and two heads!