Sailboat Cruising Can Be A Breeze

An adventurous lifestyle we started at 50 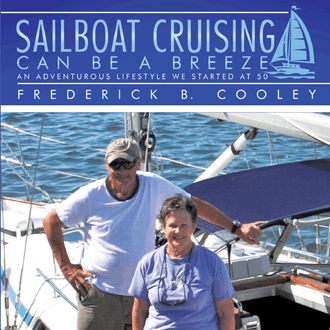 My son Rob and his wife Sarah got the first family ride on this one.

and we took a short trip west on Lake Erie, turning in at Port Maitland not far beyond Port Colbourne. There, we learned that

a) the river is too shallow to go up to the town of Dunnville with a 6’6” keel, and

b) dockmasters don’t know what their depth really is. I had reserved a slip, and he told me we’d be OK with the one he reserved for me, although “I might touch sand coming in” as river currents shift the sandbars. So I gunned it to make it through the sand to the slip, and drove our lead keel on to the point of a rock. However, by now, I had learned a lot of tricks to get out of a grounding:

- put the motor in reverse, making sure you don’t suck sand into the water inlet; no luck.

- Disconnect the wire halyard from the mainsail, and swim it over to the dock, where several people with solid footing can pull on the top of the mast that is truly a LONG lever, tipping the boat and raising the keel as well as pulling the boat sidewise; still no luck.

- Push boom out to side, add weight (400+#) of father and son hanging from boom (freezes important parts of body when done in spring); still no luck.

- Get in cold water and push bow; best if you and son are taller than water is deep, or work rapidly. Still no luck.

- Walk or row anchor out a ways, set it, then “kedge” your way off by winching anchor in; still no luck, to my amazement.

- Last step, if lucky enough to be around other people with boats: ask dockmaster to bring over a boat with a hefty motor so we can pull it backyards, the direction it came in from. Fortunately, just then a good-size powerboat went by a bit fast, throwing a wake, so we timed it correctly, and backed off as his wake lifted us momentarily. Luck!

We decided to make it up the Maitland River by staying in the middle and going slowly, and we went by shallower draft boats anchored near the reeds and mosquitoes. But we got all the way to Dunnville, only a half mile or so further, and spent a pleasant evening docked there at a slip. Docking for cruisers means dinner at a restaurant, shore electric power, hot showers, etc. And a head that flushes easily! And it was a pleasure having younger sailors that know what they’re doing aboard.

The following year, I saw the announcement about the Erie-Dover Sailing Race. We’d tried racing before, but I’m not skilled at it and definitely not competitive in the sense of “I gotta win” (e.g., boats named Shark, Gotta Go Fast, Assailant, etc.). But this five-day race intrigued me

- I was feeling my oats and figured I had enough experience to enjoy it, vs. being terrified;

- I had learned that a race is anytime two boats are going in the same direction;

- And the race itself is well-known on Lake Erie. Sail to Erie, Pa. from Buffalo on a Friday, and register. Local race Saturday, big party sponsored by Mt. Gay rum, then a Sunday 30-mile race north across Lake Erie to Port Dover on the Canadian side (I decided not to agree to a request to smuggle copious amounts of Mt. Gay Rum needed for party #2). We unintentionally discovered a major fly-breeding area of Lake Erie, off Long Point. I didn’t know that some flies breed on water, and when we went from light blue water washing around the point to darker water, the odd-looking patch was the billion-fly breeding area.

- The downwind or leeward side of our sail was black with flies, and they liked human flesh. We couldn’t switch mental gears fast enough to forget the race and go swimming, so we were tormented by these flies until we got within a mile or so from shore. They must have then smelled the fish industry or a restaurant, because the whole damn billion left at once in a cloud, and we were bug-free, other than the scrunchy layer of dead flies underfoot. Amazing.

- After party #2, race to Port Colbourne, maybe a local race first. Just getting out of the bay that runs along the 25 mile Long Point, going mostly west-east, and a bit south can take a long time, dodging huge buoys when it’s foggy and watching out for ore freighters coming in to Nanticoke steel mills. Then get to Port Colbourne, have a pig roast, and party #3. Winning song attached somewhere, composed and sung by our crew, ever so clever (SONG), and with three excellent voices (soprano, bass, tenor) plus mine.

- And the winning crew T-shirt was: “Our Drinking Team Has a Sailing Problem”. Off to Pt. Abino station of the Buffalo Yacht Club, our home port. Did you guess they had a party that night?

The youth (college-age) appear to drink and holler until 4 AM or so, sleep on the lawn, often with no tent or even shirt in some cases, then they manage to get back aboard by 7 AM when the next race leg begins.

There are also 10-20 tents on the lawn, or deck, or isolated sleeping bags, or just sleeping bodies on the grass, shirtless, with a LOT of mosquito bites. Seeing the scene from 60’ up is also fun.

- Finally, to Buffalo Yacht Club, Buffalo, founded 1860 and second or third oldest in US. After everyone arrives, damned if they didn’t have a party.

One year of the three we did, a friend Bob Ruh and his wife Joanne joined us, and they are REALLY good sailors. I managed to mess up the leads he gave me via great starts and fine coaching. We actually got out of Erie Harbor first on the leg that went across Lake Erie. We will not discuss my brilliant tactics of trying to put up a gennaker in light area but dropping the big jib first (bare-headed some call it); that ended my hope of continuing our progress in the cruising class (no spinnaker with pole allowed, among other things), from last to fifth in our division, of 7-8 divisions, and headed for second in this third year.

I’ll illustrate how safety conscious I’d become (life raft next story). Knowing we’d have my wife, son, and his cousin, John Etcheverry aboard, I reminded everyone of the safety rules, and we even practiced a hat-overboard drill to make sure. The water was still chilly in June. As we sailed, and Val wasn’t going to join us until Erie, John’s hat blew overboard. I handed him the boat hook (extendable), told him we’d come around in a circle, and he could grab it. It takes a bit of practice, and the boat hook fell into the water. Presumably being afraid I’d get angry at losing gear, John jumps in the cold water and grabs his baseball cap with one hand, the boat hook with the other. In the meantime, I notice he still has his heavy sneakers on, and it’s hard to swim with something in each hand. I tell him this, ever so CALMLY, and suggest he drop something, like his heavy sneakers, and we’ll grab him. He replies, “If I lose my new sneakers, my mother will kill me!” I reply, “if you drown, your mother will kill me!”.

I believe that Rob got a line to him and pulled him to the boarding ladder. This event still worried me a year later when we did the race again, with the aforementioned skillful Ruh couple, Val, John Montague, and myself. So I brought John’s blue water emergency raft, a heavy sucker in a metal case that took up the entire cockpit in front of the wheel. Our racing-savvy pal Bob was very upset with all that extra weight, plus everything else I’d left aboard as a cruising sailor. 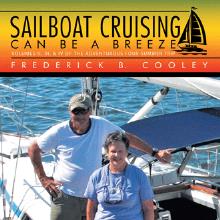 Sailboat Cruising Can Be a Breeze
Frederick B. Cooley
£15.95

Many of us have sailed or rowed small boats – dinghies, canoes, rowboats, Sailfishes, Lasers, Penguins, and hundreds more. Less have participated in sailboat races, and probably even less have done overnight cruises in various size sailboats.

Those of us who have cruised overnight (as opposed to “daysailing”) have found a remarkable world of new experiences, including

- weather of all sorts experienced up close & personal

- new and different approaches to small towns located on the waterfront

- peace & quiet under sail or at anchor

- luxury camping on our boat that does duty as our summer home, motorhome, and occasional family fun racer

- the learning of sailing itself, a forgiving sport when modest common sense is applied.

We wish others to share this abundant and affordable lifestyle. As the main photographer, I hope others will also have the opportunity to share the visual feast that cruising presents. The beauty will be evident, and you only have to point & shoot.

The author is a psychologist, sailor, and wooden boat builder. He and his wife have been to 52 ports in the US, Canada, BVI, and Greece since taking up cruising at age 50.They currently sail their 4th big boat, a Bavaria Ocean 38, out of Buffalo, NY.