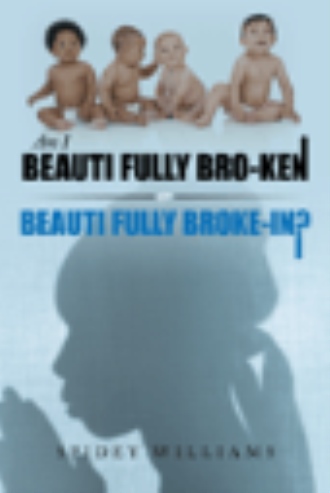 Beautifully Broke-In
Question: Or Was He Beautifully Broken?
At the age the age of two, his first fish died, he cried for days. His parents told him to toughen up, “it’s only a fish; they will buy him a new one. That they did, but it eventually it died too. This process happened several times, until they switched pets. At the age of five his first dog died. He cried but not as much as he did with his first fish. By the age of seven he was use to death, as much as he was use to breathing, without thought. No matter what was bought, the lessons his parents taught, was priceless. Although many people would say, it was harsh and cruel punishment, without passion and lifeless.
In a ten story apartment, at ten years old, a bird flew into his closed glass window, then fail to the ground. Without hesitation he ran to the bottom of his complex, picked up the bird with a broken wing, ran back up stairs quickly to bandage the injured bird. He nurtured and fathered that bird, until it was able to fly and be free. Then he let the window open, as the bird wouldn’t leave. This he couldn’t believe, so he kept the window open. Knowing one day, the bird will smarten up and fly away. One day it did, and he cried as he did at two. For days! After a weak had past, he closed the window at last. The day he did, the bird flew back into the glass. As the process repeated itself!
When he turned 12, he stumbled upon a butterfly with a broken wing, picking it up, taking it back home to nurture and father. Although he was unaware of the life expectancy of a butterfly, he cared for it every day, regardless of the fact, when it was suppose to die. Every butterfly he got after that, he knew! Yet his action and love was without change. He realized his calling, he than obtained several caterpillars, until his collection became gigantic!
Throughout his childhood and adulthood he collected a variety of different creatures, and species, experiencing much death. Loving life and death equally! He grew up, decided to open up an orphanage, with an emphasis on the handicapped, troublemakers, and the unfortunate. Realizing with enough nourishment and fathering, he could set their souls free. Although many people told him he was wasting his time and effort. He nurtured without thought effortlessly! Many he saved, many he lost. But it affected him no differently! Knowing he saved one was enough satisfaction and heaven for him. Everyone he lost he cried as if were two. Everyone he saved he cried as if he was two.
Was he beautifully broken or was simply beautifully broke in. life is filled with unexpected tragedies and broken hearts, death and lives falling apart. If you can’t find the beauty in the broken, the smiles in the death, than you’re not living. The lesson learned is; no matter the circumstances, trials and tribulations we all go through, it’s the mindset we have going into it, while we in it, and after we come out of it, that determines our life. We all can say we have troublesome lives, and we wish things would have turned out differently. Not knowing had they turned out differently, we may not be as strong as we are today, or in that case alive. 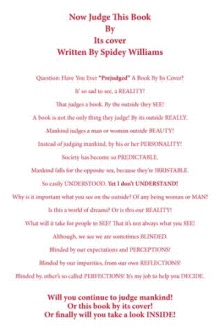 Now Judge This Book By Its Cover
Spidey Williams
£12.49 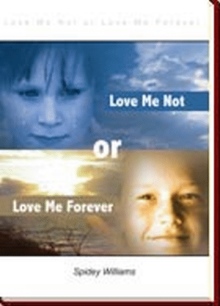 Love Me Not or Love Me Forever
Spidey Williams
£9.59

Every time I write my life story, it comes out how I feel but not always what I see. Every time I look in the mirror, it shows me all I can never hide raw & uncensored. It gives truth to me. How many of us have an alias pen name, nickname that we’re known as, other than our birth name? You don’t have to raise your hand or nod your head, but at least try to smile even if it’s hard. I was bred & raised a Christian, but I feel I am less of a man & more of a God. Every poem I write at least one person like, but the ones written in sorrow & blood, People never forget & surprisingly love. It’s hard for me to bleed externally when I’ve been bleeding internally since I was born. By age eleven I had 13 wisdom teeth, & doctors call me extraordinary, by 14 I was suspended 15 times in two years, statistics called me ordinary! By 17 I was brilliant again, from publishing my first poetry book, result of heartbroken. Should have told the witch doctor never heal me, should’ve congratulated Cupid, for failing again, should have went to every wishing well, & retrieved every penny for my thoughts, instead of publishing my first poetry book, entitled, “Poems From The Heart”

Reality strikes more than twice in the same place, and it doesn’t care, about any puppy eyes or sad face.Teaches you clichés like, what doesn’t kill you only makes you stronger, but yet stress is the ultimate serial killer! But I don’t see them sentencing life to death. They rather place patience on death row. So after learning this, I wrote my third book called, “Now Judge This Book by Its Cover,”! Just more clichés like “We live, & we learn, or welcome to life, or it is what it is”! How about Go Go Gadget me a Nightrider, so I can ride out of this fairy tale living land. Returning back to my “Land Before Time” when I remember “Once Upon A Time”, when “A Time To Kill”, was our first initial thought “By Any Means Necessary” instead of “Pulp Fiction” being our Malcolm X. Since beginning of time T.V. & movies were our “Higher Learning”, as we learn to be “A Menace To Society”, we “Biker Boys” love our cars to be “Fast & Furious,” waiting for “Friday,” so D-bo can play like he tough, until “Next Friday”. As our females continue “Waiting To Exhale”!
What have we become? Who are we, better yet, who were we not? If you were looking for me to make you smile, I hope I did a great job at the beginning, but if I didn’t, maybe the next poet or writer will. Because my last book written and published I had to let “My Pen Talk”! Evidently my words were never loud enough, my mentality was too nice, & people tried to keep me calm, & give me free advice, without living my life! I just wanted to grow up normal, wanted what most normal people did too. I was just given a different spirit; I was categorized with Martin Luther King, Malcolm X, 2 Pac Shakur, Shakespeare, Mark Twain & the rest of gang. I never had a choice, some people were given powers, but never used them, and others used them that were never meant to have them.