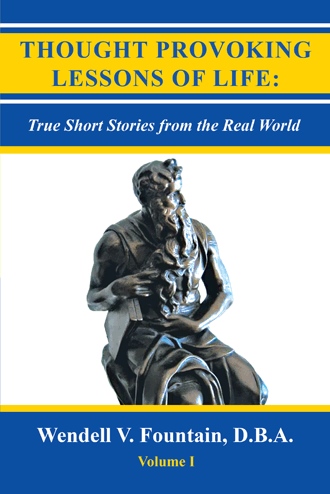 This is Volume I of other books to come. This book is a diverse compendium of actual life-learning situations, events, and conditions seen and/or experienced by or through the eyes of the author. In many cases names and places have been changed to protect the privacy of others. The purpose of this book is to share many of life's lessons which accentuate thinking and thought production of the reader. This book is a learning tool. Between these covers, you will discover stories which deal with politics, power, pettiness, ethics, morality, spirtuality, legal and illegal behaviors and practices with which we are all faced on a frequent basis.

Dr. Wendell V. Fountain is an author, entrepreneur, and business consultant. He has served as President of Fountain & Associates since 1984. Academically, he has a B.A. in psyschology, from the University of North Florida, an M.A. in human resources management (HRM) from Pepperdine University, and an earned doctorate in business administration (D.B.A) from Nova Southeastern University. He has been actively involved in the Academy of Management since 1982. In 2009, from one of his novels, (Grace), he adapted a screenplay, which he co-wrote, then directed, and produced the full-length feature film Grazia (The Movie), which was filmed primarily in St. Augustine, Florida and other parts of northern Florida. The movie premiered in January 2010 at Epic Theatres of St. Augustine, Florida. It was based on a true love story laced with suspense and intrigue. The movie Web site is