A Penetrating Peek into the Gay Life 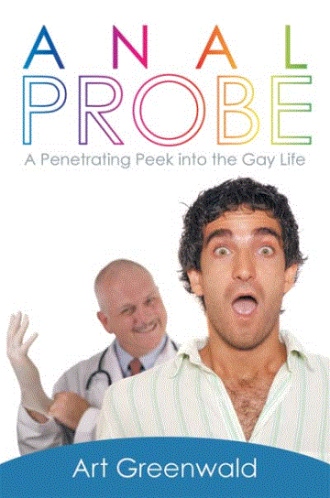 A funny thing happened on the way to 50. Regardless of how fit I appear, I hadn't seen a stethoscope since Carter ruled, I down buckets of almonds, I exercise fanatically, and I practically mainline zinc, it's high time I catered to that walnut-sized gland the American Cancer Society urges attending to. Ah, the annual prostate massage, sans gusto. As I headed toward the doctor's dungeon with trepidation, a Shadenfreude-filled Nurse Ratchet giggled sadistically as the Carpenters "Close to You" blared on the office stereo. First thing I noticed were copies of dated "Advocates" strategically strewn about the exam room and a king-sized clock shilling K-Y Jelly as if the P.C. pandering would numb the nervousness. Nope. Neither did Dr. death---a dead ringer for the lifeless eyesore in "Ghost" wailing "GET OFF MY TRAIN!"   He smirked condescendingly, wiggled three middle fingers, and pledged his everlasting gentility. Uh-huh. Doctors, like tops, tend to lie about the pain they're about to inflict. As he reached into his black bag, seeking weapons of ass destruction, I imagined channeling David Caruso whipping out a piece. "FINGERS IN THE AIR, SLIMEBALL, WHERE I CAN SEE THEM NOW!" Unlike President Dimwit, who forced his entire fist up the country's collective bum for eight years while we all slept, Doc found no weapons. Next he grabbed a latex glove and struggled a la OJ to fit it over his hand. "If it fits, you must submit," he teased. A stingy dab of K-Y preceded his poke and prod into no man's land. Old anal-retentive me tightened up like Pat Robertson at a proctologists convention, releasing a yelp heard south of Hialeah. "Can you pull out for just one second?" I inquired, oddly considering "The Soprano's" caveat, "Once you're in, you can never get out. "Truth told, Dr. Mengala hadn't entered yet. Anticipation anxiety? Perhaps a deep-seated family neurosis is to blame. My father, a tough and brave German-American who fought in World War II, recalled his first finger-fest with less than a soldier's gallantry. Tensing up while dropping his polka-dot boxers, he excused himself to go to the john and then hightailed it out of the building a la the Cowardly Lion's first encounter with Oz. "Prostate cancer? I'll take my chances. No one's getting within acres of this toochas," he'd say. A true carnivore, Dad quivered like a Hassidic Jew on Red Bull at the mere sight of a rump roast. (Ironically, he would develop prostate cancer, though he died before it could inflict damage). The ol' man, however, had no such phallic issues with knockwurst---the thicker, the better, mind you---matched only by his disdain for cocktail franks, perhaps the Oedipal link to my gayness when strolling down Freudian Lane. "What's the problem, sweetie?" Doc asked, as if I violated some strict gay code by not jumping for joy and rolling over, legs flung aloft like a poodle in heat. "Forgive me, but I figured you'd enjoy this. Kind of up your alley," he said, clearing his throat for comic affect. 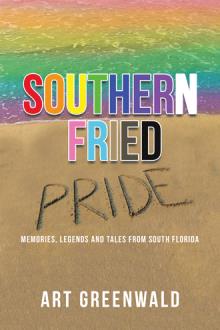 In Anal Probe writer Art Greenwald shares his "best of," a collected works of non-fiction stories and columns viewed through a gay man's lens. Part autobiographical, the Central Pennsylvania native and South Floridian chronicles the people, places and situations he's observed and experienced first-hand. Greenwald offers up a mixed bag of high drama, humor, personality profiles and closet adventures from the 1950's to the present, including his own painstaking journey for self-acceptance from small-town USA to his college days at Penn State University to life in gay Fort Lauderdale. The author reveals in searing detail his dance with death in a stripper bar, an AIDS survivor overcoming the odds, a meth addict's struggle to stay clean, a Hurricane that united, the high price of friendship, a riches to rags account of redemption, an immigration indignity and more. His quirky, tongue-in-cheek tales lighten the load, from his first prostate exam to aging gay gracefully to lampooning the dating game to gay gym rats, a lesbian guide to rejection and his rose-colored realization of Florida as the first gay state. Greenwald's provocative and profound opinion pieces tackle taboo topics with candor and without self-censure, poking fun at politics, the lifestyle and its ancient stereotypes while exposing hypocrisy. A controversial take on killer Andrew Cunanan, drag queens, a letter to the late Jerry Falwell, his laughableattempt to give up sex and an Andy Rooney "what makes gay" parody both entertains and enlightens. The author also profiles a young gay singer, a comic genius, a Franciscan Priest who uplifts the lives of individuals with HIV/AIDS, unforgettable Charlie Squires, figure skater Rudy Galindo, a champion for abused and neglected children, a security guard, transgender activist, bar owner and volunteer making a difference.

A writer and journalist for four decades, Art Greenwald launched his career covering sports at 16 for the Pittsburgh Press and for his hometown newspaper, the Altoona Mirror.

After graduating with a B.A. in journalism, he wrote on the Baltimore Orioles of the late 1970's and subsequently became editor, columnist and feature writer for a Central Pennsylvania weekly. His "Works of Art," column garnered statewide acclaim, a frank and insightful take on signiificant issues, personalities and newsmakers---local, regional and national.

Greenwald has since written eclectically for a number of niche magazines and newspapers while both a news and feature editor for Florida publications. His humor, profiles, op-ed, Q&A's, features and hard-hitting news accounts on the gay life have appeared in over 40 publications nationwide.

The author also holds a Masters of Science Degree with honors in Counseling Psychology from Nova Southeastern University and has served as a substance abuse, mental health and family and couples counselor in Florida.

Art Greenwald can be reached at articleart@aol.com