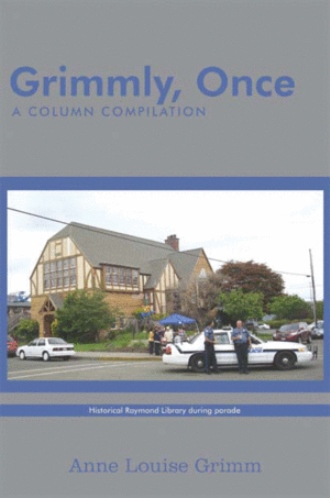 An essay compilation of selected, previously published, Grimmly Reflecting columns. Some published in newspapers and others only as emailed free with the serial number ISSN 1559-3746, sent to an Internet subscriber list from Tiptoe Literary Service by columnist .

Heading this column has been the historic words used by the former daily Star & Herald of —oldest English language daily newspaper on the of the until out of print October 1985. The Spanish edition continued, though the French edition had been out of print many decades earlier.

The following as used on the Star & Herald masthead was written by someone with identity long lost to history:

For cause that lacks assistance,

For future in distance

For wrong that needs resistance,

And good that I can do

A selection of essay columns on a variety of subjects from whimsy to political, as the name “Grimm” might suggest. Serious to tongue-in-cheek, written by an acknowledged activist, to be read by all ages.

Sometimes shocking in content—labeled as opinionated as that produced by an opinion writer should be, and therefore offensive to certain people—without all the usual four-letter-words so often used to attract attention by the semi-literate or less skilled writer.

spent her public school years in the small, rural county named Pacific, at on the in the southwest corner of across the from . First writing in the essay form, she won contests while in secondary school, graduated, lived four years in , married and left the state.

Living in , Anne had an anecdotal column—Hits & Mrs—published monthly while her children were small, before moving overseas. Followed by a column of weekly essays of 500 words for three years, and later 600, “Of Shoes and Ships” published in the historic daily English-language Star & Herald of . She was selling articles to CB radio, van and four wheel drive magazines in the , with pictures from her darkroom, when she bought her first computer. Using it to print an essay form newsletter sent to friends for one full year before repatriation.

While her children grew up, Anne had written short stories—of many different kinds, and a journal record became a book-length manuscript. Her typewritten stories accumulated unpublished on shelves and in drawers, later to be collected into files of one computer after another.

Repatriated to , Anne used her computer for novel manuscripts, still essay writing to sell computer-generated and printed columns, sent by mail to one and another weekly newspaper. By the time she had coded her own website http://www.willapabay.org/~anne/annepers.htm and could send her work by email from anne@willapabay.org the 600 word Grimmly Reflecting had been developed. Some in this first collection were compiled from what had been print-published. Others have only been distributed by Internet, free to subscribers with a release date of each Friday. More remain and still accumulate for other collections.