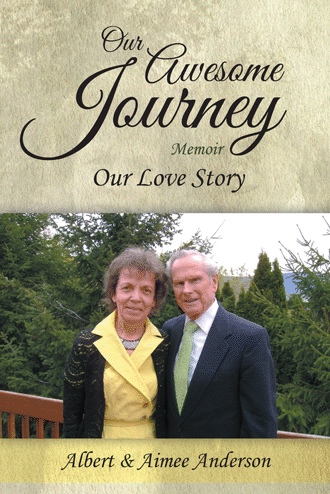 "Words do not seem adequate to describe my parents, Albert and Aimee Anderson. You will love reading about my Dad and Mom's memories. I am so glad that Dad started writing before he became bedridden. You will be blessed beyond words as you read this book.” (Debbie Chase)

Albert and Aimee Anderson pastored nine different churches throughout the State of Washington. While their six children, Deborah, Rebecca, Mary, Eunice, Mark, and Jonathan were still living at home, the Anderson family performed numerous musical concerts. In addition to being blessed with four daughters and two sons, their family now includes forty-seven (47) children, grandchildren, and great grandchildren. Praise the Lord! Albert and Aimee missed celebrating their 59th Anniversary, together on this earth, by only one month to the day. All praise be to God for all of those wonderful years of love and companionship! Aimee authored her first book: BROKEN, YET TRIUMPHANT, in 1983. It is a Memoir based upon our true life story. The minister and his wife make a terrible and heart-breaking discovery when they find the bodies of their dear friends, who had been violently murdered. They chose to deal with these untimely deaths, double-murder mystery, other near-death experiences, and trials of faith, by utilizing their strong faith in the Lord. Aimee’s second book: SUNSHINE THROUGH CLOUDS, in 2001, is the sequel to her first book, and her husband became the co-author. A courtroom, and familial drama – the way of justice is not always an easy path followed. They then co-authored a series of books, on the corruption that is often present within the church. – The third through sixth: WHITED SEPULCHRES in 1996, followed by its sequel, A GENERATION OF VIPERS, in 2001. Thereafter, they co-authored its sequel, WHITE COLLAR CRIME IN THE CHURCH, in 2004, and its sequel, GRAND JURY MYSTERY, in 2008. Aimee and Albert have co-authored this fascinating, action-filled story-book (MEMOIR / OUR LOVE STORY), based on some of their true-life experiences, OUR AWESOME JOURNEY, in 2014.