The Adventures of Morgan and Jane Merriweather

by T. B. Crandall 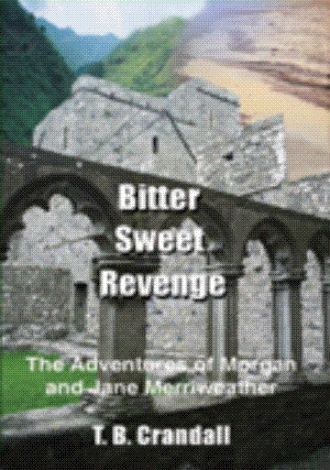 It to say own brand of “Bitter, Sweet Revenge,” for all these years of torment an self exile.” By now Jane had slide closer to Morgan, She wrapped her left arm tightly around Morgan’s right arm, her face had become gaunt and pale, as she starred at Jason. She envisioned flashbacks of her and David’s last few days together, and the enraged demeanor, as well as the distorted sense of reality. Jane saw in Jason that same intensity, even to the point of his calm, yet somewhat eerie nature.

Jason could see Jane’s eyes become fixated with fear, that “fear” began slowly creeping across her face, so he decided to play upon that, “fear” He took a step in Jane’s direction and said with a dark evil tone to his voice, “What’s wrong Jane? Seeing “Old Ghost” come back to life. You never know who will resurrect themselves, do you? He started to come closer, when Morgan quickly leaped between Jane and Jason.

“Alright, you made your point “Wolf”! You’re a pretty big man when it comes to preying on the weak, innocent, and defenseless! How bout you try me on for size, Morgan said sternly,” Jason stepped back, chuckling. “You’re still the true “knight-n- shining Armour,” Always coming to the aide or rescue of the “Damsel in Distress.” Jason replied sarcastically.” “You honestly think in your weakened condition you could take me down, Jason exclaimed angrily!”

“Even on my worst day, “Wolf” I could beat you to a bloody pulp, I proved that on several occasions back then, remember?” Morgan replied quickly, Morgan felt Jane’s hand upon his arm, “Sweetheart, I am okay, really, please don’t do this, she said,” “Awww…isn’t that precious, the “Damsel rescues the Knight,” Jason said with heir of sarcasm,”

Jason turned and started to leave, when Morgan grabbed hold of Jason’s shirtsleeve.

“What’s wrong “Wolf”? You to scared, or don’t you remember the incident, Where you almost slaughtered 20 innocent civilians, Do you remember that Wolf!” Morgan roared. Jason jerked his left arm quickly away from Morgan’s grip. Then he twirled around and with his right arm swung wildly at Morgan’s face. Morgan saw Jason’s arm come around and raised his left arm to block the punch. Then Morgan thrust his right fist, which was clenched palm up, into Jason’s stomach. The blow caused Jason to wince and gasp for air, causing him to stumble backwards, a few paces for and instant. Morgan quickly lunged forward, and with his “cat-like” reflexes grabbed hold of Jason’s shirt, with one swift single motion, Morgan fell backwards, bringing his own two feet straight into Jason’s chest, and flipped him over backwards.

Jason went flying over Morgan’s head into the dresser, the dresser shattered into a hundred pieces, for and instant there was deafening silence. Then Morgan quickly rolled over, and up onto his feet. Jane looked at Morgan who was in a crouched, “dog like” position ready to strike again if Jason stirred she looked behind her at Jason, who lay slumped in a heap like a “rag-doll.” Then she looked back at Morgan who was beginning to relax and was standing in and upright position.

“Do you think he is dead Morgan, Jane asked?” “No dear, but this maybe our only “ticket” out of here, so let’s not waist around to see if he (Jason) comes to alright, Morgan exclaimed!” Morgan turned and reached for Jane’s out stretched hand, with hands clasped tightly together Morgan and Jane quickly stepped over Jason’s body, and bolted out the door, halfway, down the hall, Morgan slid his left hand down his pant leg and reached for “Little Nellie,”

In one swift motion of his hand and arm, he held “her” in the palm of his hand, as the two “hugged” the wall, Morgan took his left thumb and pressed down on, “Little Nellie” release lever, A 4inch, jagged edged blade popped out, the “poppin” sound of the blade made Jane jump a bit, but she still held tightly to Morgan. As they made there way to the top of the stairway. Morgan peered around the corner and then dropped to one knee to look over the edge of the landing.

Jane was crouched down behind Morgan still clutching Morgan’s right hand tightly, at that point, he turned slightly and letting go of Jane’s hand for and instance whispered softly,

“Stay right here okay, I’m just going across the way to see if anyone is in the living room alright sweetheart,” “Okay, but…but… she didn’t finish.

Morgan rolled twice and was laying behind a railing of the banister, peering over the edge, From where he could see, the living room looked to be clear, So he motioned for Jane to crawl towards the stairway and he would meet her in the middle. So the two of them crawled on their elbows towards the stairway, “Quickly now, down the stairs, Jane head for the door and whatever you do don’t hesitate or look back, okay just keep on moving, Morgan said sternly but calmly.

“Okay sweetie I will,” she replied, “Morgan…I love you darling, she added.” Morgan smiled at her and then jumped to his feet, Taking the stairs two at a time. Jane was right on his heals, when they heard Jason’s voice come “bellowing” down the hallway, “Dante…Dante! They are trying to escape. Pietro! Dante! Stop them…stop them!!” As Jane neared the bottom of the stairway her foot twisted on the last step, and she tumbled across the hallway floor.

Morgan heard the thud of Jane’s body. He twirled and twisted around and managed to grab hold of Jane’s arm dragging her forward as he back peddled towards the front door, Suddenly, Dante appeared in the entryway of the living room. Hearing the cries of Jason from upstairs. Morgan looked up to see Jason standing at the top of the stairway, at the same time Dante charged at Morgan, quickly Morgan swung Jane’s body in a semi circle behind him.

Dante lunged at Morgan, with his arm out stretched, and Morgan bent low to cover Jane, as he did Dante flew over Morgan’s prone body, Morgan reached up & managed to catch hold of one of Dante’s legs and twisted it in the air. The motion and force with which Morgan flipped him, sent Dante crashing into the double doors leading to the dining room,

Jason started to make his way quickly down the stairway. Morgan rose to his feet and gripping Jane around her waist headed for the front door, with one swift kick of Morgan’s leg the front door crashed and flew open. Jason was almost to the bottom of the stair 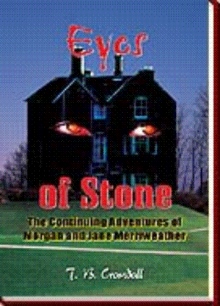 When a strange envelope arrives at the Merriweather household. It causes quite a stir. For one simple reason, its sender is a long lost relative of none other than, David Gills. Jane has her doubts about leaving Blairstown, and going to the south Pacific. Only because, of her Nightmares concerning her deceased husband David. But Morgan, tells her that, “Everything will be just fine, you’ll see.”

Are Jane’s nightmares, omens, or signs of things to come? With reluctance Jane agrees to go, but at what price? After all who is Jason, Really? Little do either one of them know what real terror awaits them.

Follow the trail of adventure and intrigue. Find out the truth about David’s long lost older brother. Meet some old friends, of Morgan’s as well. Meet Ms. Merriweather’s “one true love in life.” Meet some rather unlikely Heroes. See how the story ends for Jane and Morgan…

Or does it? Find out for yourself!

This is T.B. Crandall’s second Novel. His first Novel, A House A Fire gave him the “Spark”  that  was  needed.  Once  again  with  the  help  and  assistance  from  a very loving and supportive wife. T.B. Crandall has again; set  sail  into  the  “Uncharted Waters”  of  his own imagination and brought forth this very exciting  and  intriguing  new  Novel.  It  is his hope and prayer, that as time passes, and with the  writing  of  each  new  Novel. He will one day  become  as  prominent  and  popular,  as  is his own favorite authors, such as Jack Higgins, James Patterson, Max Lucado, just to name a few. Imagination… It’s a wonderful place to visit; you never  know  what Adventures await!