The Continuing Adventures of Morgan and Jane Merriweather

by T. B. Crandall 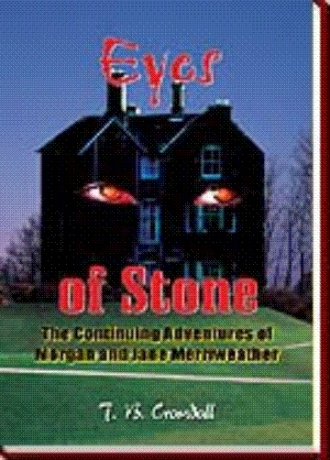 One more time Dante had almost shot someone. He was really starting to lose his edge. His head was pounding by the time he got back to the Dark Gray car. After getting inside he sat there for a few minutes and then decided to try and find a Drug Store in the area. The pounding in his head was more than he could bare. As he drove off down the street, he thought to himself, “Surely the drugist would have something. Or better yet, could recommend something for him.”

Ida sat in her easy chair in the family room watching TV with Jane and Jonathan. She really wasn’t interested in the program itself. But so as not to let on about the pain in her right arm, or the throbbing pain at the base of her neck she made the best of her predicament. Finally though, it became intolerable, and glancing at the clock on the wall she turned to Jane and said casually, “Oh dear, I forgot there were some things I needed to pick up at the Apothecary today. I think I’ll juast run up there and get what I need before they close. All right we you two? I shant be gone long, I promise.” Jane simply looked over at Ida and smiling said, “Sure Mom, that’s fine. And while yor gone I’ll have a look in the ice box to see what’s I can fix for Supper. So as you won’t have to cook tonight. Ok.”

Ida simple nodded slowly in agreement, and then easied herself up from the chair. She managed to do it without to much grimmising, so as not to make either Jane or Jonathan aware of her intense discomfort. Looking over at Jonathan, whose eyes were fixated on the TV. She quickly said, “Do be good for your Muther and Dah while Grammy’s away, lad. Alrighty.” Jonathan who was semi coherent just nodded his head in approval and continued watching the program before his eyes.

Ida, went to the hallway and took down her sweater, threw it over her shoulder’s and grabbed her pocketbook which lay on the table by the Front door. Quickly and steadily she made her way the her car. Managing to get in carefully, she started the engine and back out the drive. Little was she aware of Jake Sloans car parked in the alleyway as she drove past it. Nor was she aware of the man in the trench coat who was standing at the corner of there block as she turned down towards Delaneys Pharmacy.

Dante had been browsing the isles looking for some strong medicine to take for he exploding painful headache, when Ida Mae walked in. She made her way to the back of the Drug Store and walked up to the counter. A young lady in her early twenties came over to her and asked politely, “How can I help you today, Ms. Merriweather?” Ida squinted at the young woman, and said softly,

“Do be a love and check and see if Doc. Middleton left a prescription for me?”

Dante lifted his head from below the shelf where he was about to pick up a bottle of Excedrin Migraine for his own throbbing head. When he heard Ida’s last name mentioned. In one glance he eyeballed her from behind, and then strolled casually towards the Pharmacist counter. He was about to say something to Ida, when the young woman came from the back.

“I’m sorry Ms. Merriweather but Doc. Middleton just called in the Prescription a short time ago, and it’s not quite ready. Would you like to wait?” Ida looked at her and very sternly said, “That daft ole’ “saw-bones,” of mine. He’d forget his own Muther’s funeral if it were possible.” No, I’ll come back tomorrow in the morning’, alrighty.

Ida walked right past Dante, down a back isle and flung open the door, mummbling all the way, “Cursed I be for ever trustin the likes of that ole’ skin flint!”

Dante glanced over his shoulder at Ida as she got into her car and pulled away. Noticing the direction, she traveled he made a mental note of it. Then he turned back towards the woman at the counter, and said in a somber tone of voice, “Poor Ms. Merriweather, sounds like she really needed that medcine. You wouldn’t suppose if I waited round a bit, that it would be alright with your boss if I took the prescription to her. I mean I don’t want to break any laws or nothing but I do feel for the dear sweet woman. Besides, the Good Book says we should look out for the old ones… right? Doing a good turn for her wouldn’t hurt my chance any of getting’ into those, “Pearly Gates” now would it?” Dante just looked at the woman and managed a fine Irish smile if every there was one. Then he said, “Oh I’ll take this while I’m at it.”

The young woman, smiled back at him and then batted her eye lashes at him and leaning forward whispered, “I’ll see what I can do to help you earn your reward for a “Good Deed”. Be right back.”

The doorbell rang twice and then a soft but firm knock came on the door. Ida Mea was heading for the bath upstairs when she heard the door. Jonathan was hollering that he would get it from the family room. Ida resounded with a boisterous voice, “I’m right here laddie so I’ll do the getting this time if ya please!” there was of course no response from Jonathan. Ida opened the door slowly, and saw a man in a well dressed suit and tie. “Fancy colors” she thought to herself as she pushed open the storm door.   As quick as a rabbitt jumps in its hole, Ida Mea resounded with a rather forceful voice, “If ye be sellin vacuums cleaners, we already have one! Or Encyclopedia’s I got plenty of those too. So ya just be on yur way peddle yur stoof someplace else. Alrighty!”

Umm…no… Ma’me…I’m not sellin’ a thing, really. I was at the Apothecary round bouts and hour or so ago and I over heard you sayin’ ya were in need of this here medcine’ So, bein’ my Ma’ GOD REST HER SAINTED SOUL, always taught us yougins to look after the old ones. I’ve taken the liberty of b 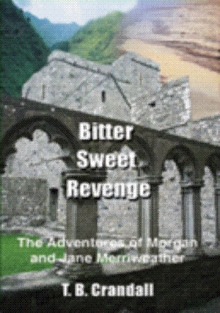 When last we left the Merriweather family they had just returned From there adventure on the High Seas. Little were they aware of that someone had survived, the explosion at Jason “the wolf” Gills Stone fortress. And was watching them all. The man with the “eyes of stone” was watching. Waiting for the right moment to put and end to Morgan Merriweather and Family. A little black box is found underneath the willow tree. Ida becomes ill, and falls into a coma, from something or someone, mysterious. A note’s  found, “This ones for U” with the initials D.P.B.K.F.F. As Jane keeps vigil at the Hospital, she ponders the questions, Where will this all end? When will it all end? Morgan disappears without telling Jane where he is going. Plagued not only by the “man with the eyes of stone“ but now also the, “man in the trench coat.” Who are these two men really? Do gooders? Or evil doers? Meet the River Rat Gang. Meet some new and mysterious friends of Admiral McInnis. Find out the real reason behind Ida Mea Merriweather’s Premonitions and Morgan’s Quest for the, Man with the “EYES of STONE”

The “Adventure” never ceases, as once again T.B. Crandall dug deep into his own, “special playground” and conjured up another great Novel filled with mystery, suspense, romance and intrigue all wrapped up in a nice neat “Little Black Box” He keeps you on the edge of your seat. Makes you laugh, and makes you cry. He delves into the issues of Trust, Loyalty, Devotion, Dedication, and Love for ones Family Heritage. There’s never a dull moment in his latest Novel. With his trusty side kick and partner, his adoring wife and most devoted fan. T.B. Crandall, tickles your taste buds, and wets your appetite for more. With Part three of the Adventures of Jane and Morgan Merriweather.