by GUSTAVE A BOEHN III 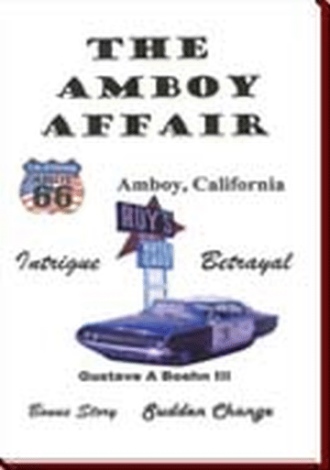 “This may sound morbid, but for a million bucks I’m inclined to do whatever is necessary to keep it. We’ll go to and wait until it gets dark, and then we’ll pay the local mortuary a visit. We’ll try to find a woman’s corps that’s close to your size. I always keep a gas can in the back of the jeep with a siphon hose, so that I can get gas from someone else’s car in case I should run out in a remote area. I’ll siphon gas from the plane’s fuel tank and then we’ll soak the body down after we place it in the cockpit. We’ll also soak down the inside of the plane. Right before you bail out, you set the plane on fire to insure it burns thoroughly upon crashing.”

Death Message From the Past
Gustave A Boehn III
£8.02

Rick is thirty-six and was fired from his job as a commodities broker. If losing his job wasn’t bad enough, his girl friend of two years terminates their relationship a week later. Rick is so depressed and heartbroken that he decides to leave and head for to look for employment. He had always dreamed of following Route 66 across country and figured this was his opportunity.

He stops in the small, remote, desert town of on Route 66 in for gas and a bite to eat. He finds it to be peaceful and quiet there, so he decides to rent a motel cabin for three nights to relax and try to rid himself of feeling depressed. He meets a pretty girl at the restaurant that had stopped by to eat, and she invites him to accompany her on her monthly business trip from to . On the way they discover that she unknowingly has been transporting large sums of drug money to be laundered. Their greed for money results in their double-crossing the drug dealers by taking the money and going into hiding, which results in his once dull life becoming entwined in love, betrayal, intrigue and the constant fear of being tracked down and murdered.

Once upon a time a baby girl was born to very wealthy parents and raised primarily by a nanny who catered to her every need. The parents also employed a full time maid, chef, chauffeur and servants, so she never had to do anything for herself. When turning sixteen, she demanded her parents buy her an expensive sports car, because she didn’t want to be seen driving anything less, and she received one.

She attended the very best private schools, and during her summer vacations she traveled the world. At the age of twenty-one, she had become an arrogant, selfish, self-centered individual. Her personality was such that no one cared to associate with her, and even her parents couldn’t tolerate her un-forgiving behavior. They realized now they were the ones responsible for creating this unsociable monster by the way they had raised her. They felt it was their duty to try and correct the situation, or otherwise she would live a very lonely life and one without love. They deemed it necessary to take drastic corrective action to change her personality, and what the parents had planned for their daughter was beyond anyone’s imagination.

The author works as an aerospace engineer. His hobbies are photography, kayaking, archery, writing and traveling. The author’s favorite book is: Love By Neshaminy Creek, a true love story. His favorite movies: , , Full Moon in Blue water, Green Ice and Five Easy Pieces. His favorite vacation spots are the and