Death Message From the Past

by Gustave A Boehn III 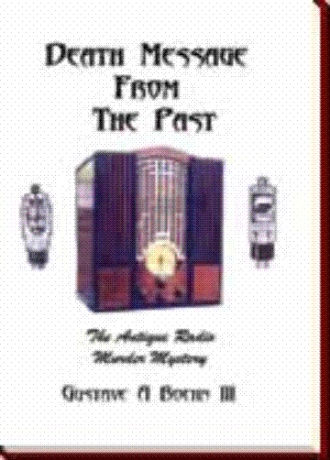 It was Monday night, and the time was around midnight. I was relaxing in my recliner chair with the radio on low, tuned to an oldies station. I was dozing off when I heard a voice in a low, raspy whisper over the music say, “Help me.”

My eyes popped open, and I quickly came to an upright sitting position. I thought for a moment that I had dozed off, and may have been dreaming. Then once again, I heard the same voice in a raspy whisper say,  “Help me.”

I swear it was coming from my antique radio. I placed my ear against the grill so it would be closer to the speaker, because this way I could hear the voice more clearly if it should speak again, but there was nothing. The only thing that came to my mind was that the radio had picked up parts of a 911 call. I turned the radio off and retired for the night. While lying in bed, I couldn’t help but think about the eerie sound of the raspy whisper calling for help. Eventually, I was able to fall off to sleep.

Tim Marks, a grade school teacher, is beginning his summer vacation by visiting the small seaside town of Ocean Beach, California to patronize the antique shops located there. While browsing through one of the smaller shops, he’s mysteriously drawn to the back isle where he finds his favorite antique radio setting on a shelf. The radio is in perfect condition and he can’t resist buying it. The shop owner informs Tim that he had acquired the radio the previous day from an elderly lady. She had made him aware that it was her daughter’s prize possession, and that she had died fifteen years ago at an early age. It broke her heart to sell it, but she now needs the money.

Tim is unaware that having the antique radio in his possession is about to change his life forever by placing it in jeopardy. His two-year romantic affair with Elaine Carlson is already on shaky ground, but his ownership of the antique radio is about to bring it crashing down. Tim finds that kicking back in his recliner chair while listening to the oldies on his antique radio is more enjoyable than spending time with Elaine. This was brought about by the fact that Elaine is always bringing up the subject of marriage, which is not on Tim’s near term agenda.

One evening while listening to his antique radio, he receives an inexplicable message that sends shivers down his spine. His curiosity causes him to follow the instructions given him, which transports him fifteen years into the past. Upon Tim’s return to the present time period, he becomes involved in the investigation of a fifteen-year, unsolved murder of a young woman that took place in Hemet, California. He had made the young woman a promise while in the past, that he would track down her killer and bring him to justice, so her spirit is no longer earthbound.