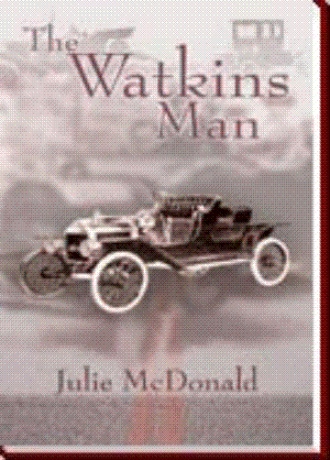 Anton parked Winnie on the east side of the Square and walked around the court house to Paup's Tavern on the west side. Now that the signs were on the doors, it didn't seem proper to put the car outside a saloon. Not that it mattered anymore, he supposed. The 18th Amendment had been ratified in mid-January, and Harry Paup might have to change the nature of his business if he hadn't already.

Before Anton went into the Army, he and Marius would spend an hour or two at Paup's on a Saturday night. If anyone still remembered him in this town, it would be the regulars at the tavern.

The place hadn't changed, he thought, taking in the dim, amber light; the clouds of cigarette smoke; the dark forms in the booths, their faces pale disks in the gloom. They nursed coffee cups.

He approached the bar and said, "Hello, Harry."

"Well, I'll be damned!" Paup said. "You're back. That's something to celebrate, I guess." He reached under the bar and brought up a coffee cup. "This one's on the house."

Anton took a sip. Home brew. He said, "I thought there was a law."

"There is, damn it! If Hobie Nissen comes in, swallow that real fast and fill that cup with coffee. I keep a pot in every booth."

"So Hobie's still the sheriff?"

"Unless we wanted a lady wearing the badge, wasn't nobody to run against him. You interested?"

Anton shook his head. He took a swallow of the strong ale and complimented Paup on his brewing skill.

"Took awhile to get the hang of it. The first batch blew up and brought down the kitchen ceiling. That was in Mason jars. Now I've got me some bottles."

"Do tell! I could use a bottle of that red liniment. I'm real stiff when I get out of bed in the morning."

"I'll run back to the car and get you a bottle."

"Hold your horses. Let's see if anyone else needs something. Hey, fellas! You remember Anton Juhl, don't you?"

One by one they left their booths and tables to shake his hand. He couldn't remember all of their names. A lot of them were retired farmers, and there was Lou Wylie, the blacksmith; Glen Reyelt, the barber; and Joe Clausen, who used to run the livery stable.

Talking with them, Anton smelled their beery breath and thought the jig would be up if Hobie Nissen walked in and did the same.

"Anton's going off to his car to get me a bottle of liniment," Harry Paup said. "You guys need any Watkins stuff?"

"What have you got?" Joe Clausen asked.

"Whatever you need," Anton said. "Do you still have horses?"

Anton thought. He said, "How about some veterinary ointment or some stock tonic?" He pulled out a pencil stub and his brand new order book.

Joe decided on the veterinary ointment, Glen wanted scalp tonic, and Lou ordered shaving cream and a bar of Crystal Rose soap for his wife. One of the farmers wanted Dyspepsia Tablets and another asked for Cream of Camphor. They seemed to know his stock better than he did, Anton thought.

He brought the items back, and the men dug into their overall pockets for the money. He counted it and pulled out his watch, trying to decide whether he had time to drive to Denison to deliver the louse killer and poultry tonic the farmer up there had ordered.

Harry Paup said, "Have you got something to take the stink out of a room? I think a rat must have died inside the attic wall."

Anton had read an almanac hint that suggested boiling vanilla to mask unpleasant odors, and he offered to return to his car for a bottle.

They set half a bottle to boil in a pan on the small kerosene stove in the crowded back room, and when it was bubbling, Anton wrapped a dish rag around the handle and followed Harry up the rickety ladder to a trap door that led to the attic. When Anton found his footing in the upper darkness, Harry reached down and pulled the lightbulb dangling on a long cord into the space for illumination.

The stench was recognizeable. Old death, which Anton had smelled before. But this was no dead rat--not even a colony of dead rats. He kept his nose over the steaming pan of vanilla to combat the smell as Harry pulled the bulb as far up as it would go.

"My God!" Harry said, pointing to a shoe protruding from beneath a pile of planks. "Hold the light." 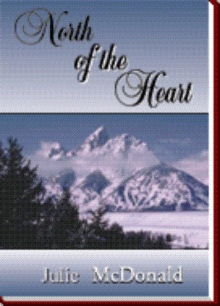 North of the Heart
Julie McDonald
£10.75

Anton Juhl leaves Denmark for a better life in Iowa, USA. Before that better life begins, he finds himself a doughboy in France, where his best friend, George Froman is killed. After the Armistice, Anton pays a condolence call on George's mother.

George had been a Watkins Man before he enlisted, and Anton believes his own pursuit of the American Dream might be in the same calling--that of a Watkins traveling salesman.

The story follows Anton through rural and small town Iowa as he disarms vicious watchdogs, pitches in to help with farm chores, cooks for the sick, listens to the lonely, and searches for happiness and love.

Anton becomes involved in the discovery of a murder victim. The ensuing trial allows him to see more of Elise, a legal secretary. But their relationship falters when a prime witness turns out to be a young female Anton has befriended.

Anton's salesmanship brings him true love and the promise of a bright future as a Watkins Man., that icon of American enterprise.

"The Watkins Man" is Julie McDonald's 28th published title. A graduate of the University of Iowa, she attended the Iowa Writers Workshop. She is a newspaper feature writer and columnist, concentrating on the arts, and has taught journalism at St. Ambrose University. She also has taught at the Iowa Summer Writing Festival. A former chair of the Iowa Arts Council, she now does residencies in its Artists-in- the- Schools/Communities program. She lives in Davenport, Iowa, with her attorney husband and their Scottish Deerhound, Lochinvar.