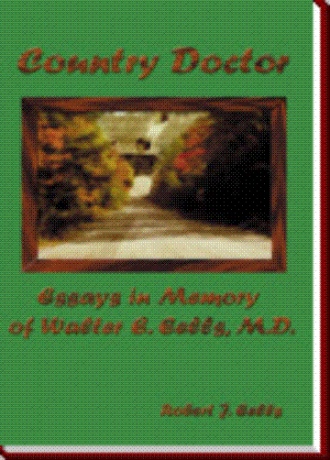 ROOM AT THE INN

December 1944. The world was at war. The German army had launched a major counter-offensive in an effort to push the Allies back into the sea. It was not to be. They were stalled for two basic reasons: they ran short of gasoline and they confronted the "elements"--a brutal winter which buried them and everyone in mountains of snow and numbed them with bone-chilling temperatures. Many men died on both sides and the real heroes proved to be the medics, who risked their own lives to tend to the wounded.

Thousands of miles away in the peaceful village of Walton, New York, another crisis occurred which also called upon the administrative and medical skills of a small-town doctor and his wife. They rose to the occasion, just like those far-away medics.

Dr. Walter Eells and his wife, Katherine, faced their own "battle" when a fire broke out at Smith Hospital on December 10, 1944. The small hospital (a wood structure) was filled with patients (thirty was full for Smith), and not only was there snow on the ground that day, but the temperature had plunged to –12oF!, a possible calamity when attempting to transport patients.

All the patients were evacuated safely. Several ambulances responded to the emergency as well as friends and neighbors, eager to hurry people to their destinations. The big question of the day, however, was where to take them? Quickly, Doctor Eells made three decisions: some--the least ill--were sent home; some of the most serious were sent to other area hospitals; but a major obstacle remained: a few of the seriously ill didn’t want to be sent away. They pleaded with the doctor not to send them to other hospitals.

"What are we going to do, Katherine?" the doctor asked.

It didn’t take her long to come up with an answer: "We’ll have to put them in our house. We can free up three bedrooms if we put the baby (me at nine months!) in our room and keep Eleanor (three years old) in her small room off the master bedroom. That will give us enough space for the remaining patients (six in all)."

"That’s a big burden," responded her husband. "You’ll have to take care of two small children and cook and help care for several other people. Are you sure you want to do this?"

"I don’t see any other way," she answered quietly. "They really want to be under your care here in Walton. As long as we have a nurse on at all times, we can manage."

Well, they did manage, though they had no idea at the outset that this arrangement would last for ten weeks! During that whole time, they cared for no fewer than five patients at a time, so it was usually two per room. Three daily meals were provided by the good wife, round-the-clock nurses tended to the regular medical needs of the patients (with assistance from Mrs. E.), and Doc Eells just had to jump upstairs to make his "rounds." The doctor’s appointment book was full during these weeks, meaning that he saw between thirty and forty people per day in his first-floor office in the same house at 35 Townsend Street. It was a hectic pace for all. By the way, Dr. Eells also performed one appendectomy and delivered two babies up on the second floor!

It’s hard to imagine anything like that happening today. Quite understandable. At the same time, hasn’t something valuable been lost? Perhaps forever?

The most amazing thing to me is how my mother could be so selfless, so willing to allow her own home to serve as a hospital. For most moms just raising two youngsters would have been more than enough responsibility. Mom, you were truly remarkable! As always. 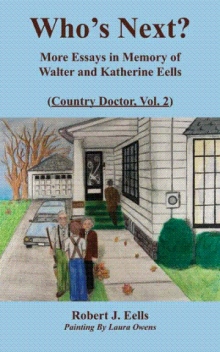 Walter E. Eells practiced medicine in a small town in upper New York State for over sixty years. This book contains short stories written about this unusual man and his wife as they served the people of this town (Walton) medically and in so many other ways. This doctor’s medical practice was unique in that his office was in his home, and because he owned and operated a private hospital right across the street. From these two locations, he served a constant flow of patients beginning in June 1930 until the early 1990s. His accomplishments include: delivering over 2,000 babies (many in homes), being the first doctor in Walton and Delaware County to use penicillin, and being the first doctor in Walton to perform operations.

All the stories are true, having been witnessed by his son, Robert, directly, or were shared with him by family members or friends of Dr. Eells. Some of them are humorous and some quite dramatic -- like saving the life of a newborn when it seemed hopeless. The author has added color and dialogue where necessary based on primary or secondary accounts or based on what very likely would have been spoken at the time. But all stories remain essentially true.

It is obvious that medicine like this is no longer possible. Too many changes have taken place in society; we are too complex and impersonal today. Something wonderful has been lost, though, as the reader will soon discover when introduced to Country Doctor.

Robert J Eells, is Professor of History and Political Science at Spring Arbor College in Michigan. He has taught for twenty-six years -- previously at Geneva College in Pennsylvania, Rockmont College in Colorado, and at Trinity Christian College in Illinois. Professor Eells has his B.S. from Geneva College, an M.A. from Union College in New YorkState, and a Ph.D. from the University of New Mexico in American Studies. Dr. Eells is the author of two previous biographies -- Lonely Walk: the Life of Senator Mark O. Hatfield (1979) and Forgotten Saint: the Life of Theodore Frelinghuysen (1987). He is also the author of about twenty articles -- mostly about religion and politics -- and a dozen book reviews.

Because his father, Walter E. Eells, had his medical office right in his home and his own hospital across the street, many of the stories in Country Doctor were witnessed by his son, Robert, or were related directly to him by other family members, friends, or long-time patients. And because the author for a time considered medicine as a vocation, he "experienced" some of these stories existentially by assuming the role of a young "Dr. Kildare" during the 1960s -- as a high school and college student. As a result, he was privileged to witness and experience a type of medicine, which -- sadly but understandably -- no longer exists.

Dr. Eells is married to Janice (Johnson) formerly of Albuquerque, New Mexico and they have two children, Richard (14), and Anne (11).