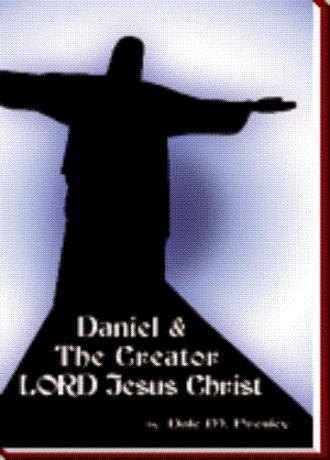 DAN 12:11 And from the time that the daily sacrifice shall be taken away, and the abomination that maketh desolate set up, there shall be a thousand two hundred and ninety days.

12:11 Perhaps because Daniel was so persistent, the LORD continued the prophecy and told Daniel that "from the time that the daily sacrifice shall be taken away, and the abomination that maketh desolate set up, there shall be a thousand two hundred and ninety days." This is speaking of what will happen on this earth at the end week of years of the seventy weeks of years concerning Israel that were prophesied in Daniel 9:24-27. For it was "the end of these wonders" concerning that most-horrible of all times for the nation of Israel that the angel of Daniel 12:7 asked about and that Daniel sought details about with his repeated question of verse 8. From these questions, we can surmise that the LORD was speaking of "the (length of) time" from the taking "away" of "the daily sacrifice" and the false prophet’s setting up of the image of the Antichrist for worship by all men until the end of the originally-scheduled last week of the seventy weeks of years of Daniel 9:24-27 that concerned Israel, namely the end of the 7-year Tribulation.

"The time" of Gentile occupation of Jerusalem (Rev. 11:2), when power will be given to the Antichrist to speak great things (Rev. 13:5), will be 42 months, or 3-1/2 years. But we know that this "time" will commence with the Abomination of Desolation that this verse tells us will occur one month before the mid-point of the originally-scheduled 7-year Tribulation since 1,290 days divided by 30 days/prophetic month equals 43 months. Therefore, we now know from this that Christ will return 42 months after the Abomination of Desolation at one month before the end of the originally-scheduled 7-year Tribulation. However, as noted in commentary on Daniel 8:14, even that "time" of Christ’s return is pin-pointed more closely to be one month of 30 days/month plus 5 more days (equals 35 days) from the very end of the originally-scheduled 7-year Tribulation. For Jesus Christ will end the occupation of Jerusalem by Gentiles immediately upon His return and He will surely take away all power from the Antichrist at that "time."

Jesus Himself said in Matthew 24:22, "And except those days should be shortened, there should no flesh be saved: but for the elect’s sake those days shall be shortened" (Matt. 24:22). In other words, if Jesus Christ delayed His return to the earth until the end of the originally-scheduled 7-year Tribulation, "no flesh (would) be saved" alive on the unregenerate earth to even see His return. For, the pouring out of the seven bowl or vial judgments of Revelation 16:2-16 will make life on earth impossible beyond the beginning of the last month of the originally-scheduled 7-year Tribulation. Nevertheless, the LORD Jesus Christ will not shorten those days out of mercy for the already-eternally lost, who will be the only human flesh alive then (Dan. 7:21&25, 12:12; Luke 18:8; Rev. 6:11, 7:9-17, 9:18-21, 13:7-10&15-17, 14:13, 15:1-16:1, 16:18-20, 19:18&21, 20:4-6). He will shorten those days solely for the elect’s sake. For in Mark 13:20, Jesus added to His statement of Matthew 24:22 by saying that, "but for the elect’s sake, whom He hath chosen, He hath shortened the days." Proverbs 10:27 affirms that "The fear of the LORD prolongeth days: but the years of the wicked shall be shortened." The elect ones spoken of in Matthew 24:22 and Mark 13:20 could be those already in heaven with the Lord. But more than likely this refers to the Sheep from the Sheep/Goat Judgment of Matthew 25:31-46 whose souls will not yet be with the Lord prior to that judgment.

In addition to what has already been stated, that last 35 days of the originally-scheduled 7-year Tribulation will give the LORD Jesus Christ time to perform the Sheep/Goat Judgment of Matthew 25:31-46. It will also give time for "the fowls that fly in the midst of heaven (to) come and gather (themselves) together unto the supper of the great God" at the so-called Battle of Armageddon that will be provided by his crushing of all of the eternally lost of all of time of this unregenerate earth (Ez. 39:17-25, Rev. 14:20, 19:17&18). Finally, it will give "time" for the regeneration of this earth for Christ’s glorious, absolutely righteous, Millennial Kingdom of worldwide rule with His rod-of-iron administration of swift justice (Ps. 2:9; Rev. 2:27, 12:5, 19:15).

"Daniel & the Creator LORD Jesus Christ," fully complementing the author’s commentary on the book of Revelation, "Way Truth:Life," is a verse-by-verse commentary on the entire book of Daniel. This includes the history of the man as well as a full explanation of all of Daniel’s prophecies. This book is a must-read to understand what God is doing and is about to do. The purpose of this book is to glorify the fullness of the Second Person of the Holy Trinity, namely the Creator LORD Jesus Christ, through Whom God must and will receive all glory.

The author has been and is a Licensed Engineer in the State of Texas since 1980 (BS-EE Lamar University 1969), but understanding Bible prophecy has been and is his passion. After studying/teaching through the Bible twice and writing commentary on all but a few chapters, the author wrote a complete commentary on the book of Revelation in 1997 entitled "Way Truth:Life." The author believes the sixty-six books of the Bible to be the complete Word of God to mankind and that it must be interpreted most literally and with a penitent heart to understand it.