A Ghost for Sylvia 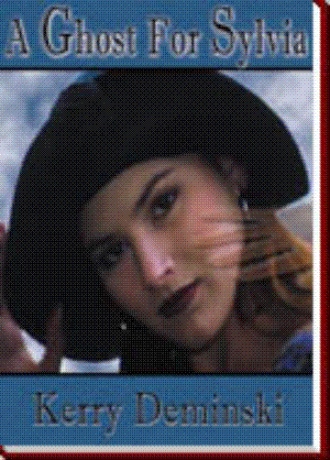 His eyelids started to droop and his head began to tilt downward as he sat on the comfortable sofa. What he should do, he knew, was get up and go back to bed before he fell asleep, but his body was so relaxed that he was unwilling to make the effort.

His eyes flew open and he sat up rigidly straight. The man's voice came from a spot directly in front of him and only a few feet away. The hair on his arms and the nape of his neck stood on end. 'Who are you?' His voice trembled with fright. A truck rumbled by with its high beams on. It brightened the room enough to show him that there was nobody standing in front of him.

'Eric, we've waited so long to come to you.'

'Oh my God!' Eric Chambers desperately wanted to flee, but his muscles were virtually paralyzed with fear.

'Eric, don't be afraid. We would never hurt you.'

This time it was a woman's voice coming from a point just to the right of the man's position. If only he could move to turn on a light, reality would return. But he could not.

It seemed now that something more powerful than fear was rendering him immobile.

'You are so very special, Eric.'' It was the man's voice again. 'That is why we were allowed to come.'

His racing mind tried to settle on any rational explanation for what was happening. Maybe his buddies had somehow managed to rig up speakers or a tape recorder in the room. He quickly disregarded that theory. His friends just weren't that intelligent. What about Clarissa? No. Her girlfriend? Clarissa's ex-roommate couldn't have done this to him either. His churning mind zeroed in on the theory he did not want to admit. He thought, I'm going crazy.

'No, Eric, you're not.' The male voice was full of compassion.

'How did you know what I'm thinking?'

'Eric, there are many things we wish we could tell you, but we cannot.' The woman's voice again, sounding every bit as compassionate as her companion.

'But who are you? Where are you?' He looked at the emptiness before him. His eyes were wide with terror.

'We're here with you, just as we always have been.

Along with the declaration came a wave of emotion that swept over him, erasing years of longing for the two people who had been missing from his life. He felt completely loved. If this was insanity, he did not want to be sane ever again.

On the very first night that Eric Chambers and his girlfriend, Clarissa, begin living together, Eric's parents pay him a visit. Clarissa freaks out and moves out, and Eric is forced to rethink everything he believed to be true about how the world works -- his mother and father had died while he was a baby. As well as telling their son how much they love him, the spirits inform him that he will be called upon to perform an act of heroism by saving the life of a person destined for greatness.

When Eric is driving home after his four-to-midnight shift ends and he spots a young woman being attacked by two men, he is not surprised. But the spirits of his parents had given him no clues as to how that encounter would reshape his future.