The Color of Green 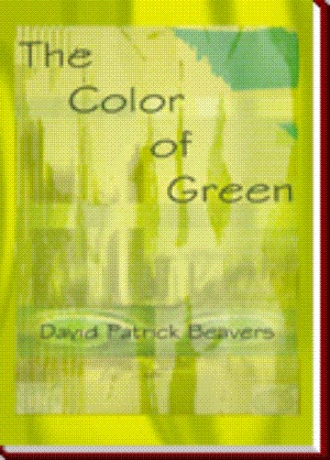 Wings, wet with fire light, crested steadily, disappeared steadily, riding waves of liquid velvet blacker than the infinite void of the universe above. Wings. Moonlight upon water. The ocean deep swelling up, churning, pulsing, wanting to surge forth and slip up on the shore. Fragrant air. Slight cool breeze. The rhythmic tones of the sea. Ben inhaled the wetness of the night. Held it in him as he lay back on the sand of the dune. He let the sea air escape slowly through full lips, sending a slight, hollow, whistling note up and out into open space. Large, soulful eyes of ruby-brown brilliance stared at the stars. Wandering eyes. Wondering if his subtle signal would ever be heard. He wanted it to be heard. By someone. Up there. Out there. A friendly alien who would walk through a ripple in time, materialize in a beam of light, or just suddenly appear with a sympathetic extended hand and lead him away.

But that wasn't likely to happen, he thought as he sat up again and brushed the sand from his sandy blond hair. His stomach churned in sync with the ocean. The Pacific Ocean.

Far, far away from his home in Laramie, Wyoming where heat and cold were extreme, where money and employment were scarce, where family members nested like hornets, forever nosing nosy noses into each others' business, stirring up arguments, fueling decades old feuds, and creating in-fighting amongst the ranks of the clan. At sixteen, his Aunt Rita, a recent relative brought into the tribe by her dubious marriage to Uncle Clarence, got a bit ripped on Christmas cheer and Kentucky whisky and began grilling Ben on his high school social life, while the clan was in the middle of Yuletide dining. He evaded much of her interrogation with polite shrugs and blanket answers. Yeah, he played Varsity baseball. Left field. Yes, he was on the Junior Varsity swim team. 400 meter free-style, 200 meter breast stroke were his events. No, he didn't play football. Didn't like playing in the cold and the snow. Yeah, Uncle Clarence had taught him to ride and rope but he preferred riding horses just to let them exercise, to do what they do best. His grades in school were fine. College prep classes. No, he didn't have a girlfriend.

That statement put loud, buxom Aunt Rita with her bubbled coif of shellacked, brassy red hair, on a mission. Fueled by a toxic mix of whiskey, black coffee and Salem cigarettes, she grilled each and every person at the dinner table about possible romantic matches for her new nephew. Surely someone knew some sweet, shapely gal for her pretty boy buck. Pretty Boy Buck. That's what she began calling him. All the time. Bucks weren't pretty, Ben said to her many times. Handsome animals, yes. A doe was pretty. A buck was handsome. She didn't get it. Didn't want to get it. She had her mission. Finding some fawn eyed gal for her Pretty Boy Buck. His family, especially his mother, encouraged her. Blind dates were arranged. Some third cousin's husband's niece. Church member's granddaughter. The beautician's client's daughter's best friend. The parade of pulchritude continued, like he was some Prince being solicited by all the Cinderellas within forty miles.

Ben had hated playing the charade. Hated being silently resentful of the young ladies whom he was forced to escort to lame church sponsored dances, to cheesy county fairs, to off-key recitals by teenaged madrigals, to PG movies - He'd seen one movie so many times he knew the dialogue by heart. Still, he felt he had to play the game. Had to. Had to rid his thoughts of Dean Reese, the black haired, blue eyed third baseman on the Varsity team, whose uniform hugged his long, lean body like skin. Skin that Ben surreptitiously watched get peeled away in the locker room after every game, revealing Dean's sweat slick form of pale olive flesh. Flesh and form that made Ben's crotch stir. Made his stomach twinge. Made him panic. Dean. And Tom Larson, the short, white blond Captain of the swim team with musculature developed beyond his young age. Tom in his blood red Speedo arcing with dolphin ease through clear pool water, his powerful shoulders and muscled back glistening. His sparkling green eyes and toothy grin softening the hard edge of his rugged, bull dogish looks. Tom. And Dean. And others. Other guys Ben caught himself watching. Guys who made him break out in a cold sweat when sightings leaped to imaginative fantasy of stripping them, feeling them, wanting them. The urgency of his urges scared him. Fear tethered him to the cycle of blind dates with pretty young maidens being stabled for his pleasure by his clueless clan.

Then, early in his Senior year, they brought him Sarah. A child of the military, she'd been moved from pillar to post and back again as her father, a Naval Officer, shifted their family from port to port all around the country. He'd retired. Chose to return to his boyhood home. Sarah had come in tow. Transplanted from the wilds of cosmopolitan San Francisco and plunked down in Laramie. It was Sarah, with her direct but soft approach, that confronted him. They'd gone on a few dates. Each time she'd become aware of him watching men, his eyes lingering a bit too long on them, his cheeks flushing slightly crimson, he turned abruptly back to her. Lots of signs, she'd said. She'd met many gay men in San Francisco. There had been boys and a few girls in her high school who were openly gay. She'd become pretty close friends with a guy named Troy the year before. She thought Ben should meet Troy. Ben was reluctant, though. His parents would definitely question any long distance telephone calls to California, especially to San Francisco. Sarah, though, persisted. Then one day Ben received a letter, sent in care of Sarah, from Troy. This opened line of communication with a guy who was what Ben thought he might be was frightening. And exciting. Exciting in the same way as finding someone in an alien land who spoke the same language.

Throughout the duration of his Senior year, Ben corresponded with Troy. They both went through the ordeal of 'Pomp and Circumstance' within days of each other, each garnering that coveted high school diploma and the freedom of adulthood that comes with ones eighteenth birthday. Troy was only a couple of months older than Ben, but they were light years apart when it came to experience. Troy had confessed much of his own life to Ben, in descriptive letters that would have sent his parents into a Bible thumping rage had they been discovered.

Green is young Ben, fresh from Wyoming and falling in love with his roommate, Troy, a young man he'd found in San Francisco and followed down the coast to the small town of Delphi Beach, where they move in with Sanderson, an erratic pornographer with a penchant for drugs and extremes.

Extreme defines Sanderson's relationship with Troy, one of his former boys. Their union is carnal and cruel at times - something that both intrigues and infuriates Ben. But Ben abates his jealousy until Troy comes to him freely, seeking to connect with someone healthy and whole. Troy, though, is deeply linked to Sanderson, who's reluctant to completely let go.

When Sanderson pulls out all stops, he tries to take his Troy-boy down, stealing control of his young man's body by pumping him full of crystal and raping him, all the while reminding Troy of his days and nights as a drugged up whore giving himself up before the camera's lens. Ben happens upon them during Sanderson's controlled brutalizing of Troy. The green, young man loses control. His detachment fails him. Logic and reason are lost as pent up emotions flare and he attacks the attacker. A green, jealous monster he becomes as he nearly kills the transgressor. But monsters don't die and Sanderson's episode leads to some jail time. Time enough to think. Time enough for fear to bleed into Troy's mind. Fear that makes him run - from Sanderson, from Ben, from the life he'd led. He wants to rebuild himself. Separately. Separate from Ben, the one person he may truly love.

Ben retreats slowly from his friends, from his life, turning to the seedier paths that Troy and Sanderson had shared. But all paths intertwine. The darkest paths are paved with green. Money green. Money means freedom. Money is the means through which Ben might find his missing young man.

Sanderson's release triggers his plan for retaliation. For revenge. Through his network of nefarious friends, Sanderson links Troy and Ben back together again for what he hopes to be their last time - as the stars of his final film. Green is sickness. A film for extremist voyeurs. A film of a brutal death within bacchanalian confines that green, young lads cannot comprehend - yet are forced into.