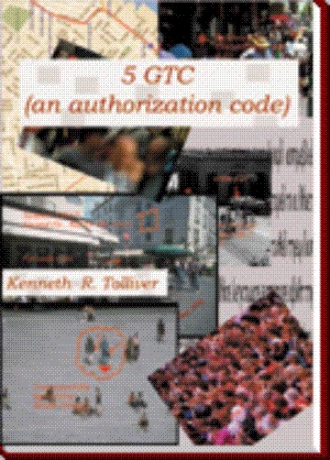 Rain, cold autumn rain, drizzled on the roof of the bus shelter and faceted the street lights in the dirty windows like images seen through a compound eye. The figure sheltering against the weather was distinctly and harshly lighted by the single fixture in the ceiling. It was a woman. She was tall, and despite a heavy fabric raincoat, her full figure could be discerned. She wore opaque plastic rain boots over her high heel pumps. More plastic protected her head. Her features were not flattered by the lighting; but even so, she would not have been termed unattractive. Her age, like that of most mature women over 30 but under 60, would have been hard to guess. Except for the lonely isolation of the bus kiosk and the fact that the last bus had already made its good-night stop 20 minutes earlier, there was nothing noteworthy about her presence at the bus stop. Indeed, she might simply have sought the shelter while waiting for a cruising taxi or for the rain to let up sufficiently to continue on foot. The neighborhood was middle class and not considered either dangerous or the hangout of ladies of the night. In point, only a few blocks away, two of London's motorized police officers were at the moment cruising in her direction. Because it was a respectable area, it would be expected that they would most likely stop and very politely offer assistance.

The woman glanced at her wrist watch. It was 12:33 a.m. She shifted her purse from under her right arm to the left and walked to the edge of the shelter where the rain could just be felt on her plastic head scarf. It appeared as if she were testing conditions, perhaps deciding whether to leave the grim haven of the shelter, when she saw the headlights of an approaching vehicle. The car slowed and veered toward the kiosk. The woman, either expecting or recognizing the vehicle, stepped clear of the shelter and moved to the curb. The car eased to a stop and simultaneously the driver smoothly lowered the electrically powered window as the woman, her face now in deep shadow, leaned forward as if to speak.

Three quick flashes of almost silent flame illuminated her face as the soft-nosed bullets tore it away. Less than two minutes later, the police cruiser's headlamps picked up the mass by the curb and instantly brought the officers to attention. Like veteran police officers in any city, both the bobbies expected the worst. They feared it had been a hit-and- run victim, but the enormous amount of blood mixing with the rain on the pavement shocked them. When they knelt down to examine the victim, the brutal horror of the murder was vivid. Not only was the face torn and mangled by the large caliber bullets, but the entire skull had exploded from the back. The younger police officer found his stomach churning and the nausea rising. His partner, a little less affected, ran for his radio.

Her heart was still pumping her blood onto the pavement, now mixed with vomit. East Berlin

Despite the thin warmth of the October afternoon, few customers occupied the tables of the sidewalk cafe. The tourist season in East Berlin had ended a full month earlier with the coming of the chill autumn rains and the end of summer. Even today, with the weather almost pleasant again, it had hardly been profitable for the cafe to put tables out. Earlier, a small crowd at luncheon had forecast a busy afternoon, but this forecast was unfulfilled as the customers hurried back to their offices and jobs.

At the moment, trade consisted of three elderly gentlemen exchanging memories over their beers at one table and a thin young woman seated quietly by herself. Franz, the waiter, had been contemplating the woman for some minutes. She was dressed in a plain, wash worn summer dress, much too thin for the weather, and she carried a cheap plastic raincoat which today was unnecessary unless, as he guessed, it was her only protection against the chill. She was cuddling a cup of coffee which by now had surrendered all warmth, and since she had not ordered even a small sweet bun, Franz was certain her purse was as thin as her arms.

During busy times, he would have harassed her with requests for reorders in an effort to free up the table, but today that would have been pointless and there was the now bankrupt hope that she was waiting for a friend, or might, being reasonably attractive, entice another customer into sitting down. Franz knew that women could produce business, even when they tended to be too thin and plain. But now the shadows were stealing the feeble sunlight from the tables, and Franz knew there would be no additional trade to add a few more marks to the till.

He wondered why the woman remained. He noted she often glanced at her cheap wristwatch. She appeared anxious, almost frantic with the passage of time. Certainly she had been waiting for someone, most probably a man, who had stood her up. Pity, he mused, such a young woman must be worth an afternoon's passion. He would have preferred a woman with a full figure, plump thighs that would cradle a man in luxury. Such a thin woman would be best seated astride he concluded. He considered offering her a small brandy himself, when he noticed her once again check her watch, then with a frustrated pout on her face, rise from her table. He watched as she paused once to search the street in both directions before slipping on her raincoat and departing. Franz shrugged and gathering up her cup, was surprised to find it almost full.

The thin woman departed in the direction of the S-bahn station and had only gone a block when, passing a stoop-shouldered old man carrying a string shopping bag, she heard a name sharply whispered. Surprised, she turned and gazed into the face of the man, only instead of the expected rheumy eyes of an old veteran, she found herself confronting a pair of intense, alert blue eyes. Before she could speak, the string bag slipped from his grasp and potatoes and onions cascaded onto the sidewalk.

'Help me,' came his husky command, and she instinctively crouched down and began retrieving the vegetables. Only as she was trying to gather up the scattered potatoes did she grasp the ploy.

The Cold War is in its last months, but while the Russians and the Allies are tentatively exploring new political avenues, opposing intelligence agencies remain locked in deadly operations. While the Berlin Wall is crumbling around them, die hard Nazis in the East German intelligence service plot a desperate revenge they hope will rekindle aspects of the Cold War. A bizarre, seemingly unrelated murder in London, triggers British Intelligence's curiosity. Their investigation, resting almost solely in the efforts of a single agent, leads to a duel between the protagonists that pits elements of the Irish Republican Army and Arab terrorists, against the British Secret Intelligence Service. The Russian KGB finds itself beseeched to assist its former foe.

An intelligence operative who actively participated during the Cold War, Kenneth Tolliver was educated abroad. His experiences range from service in Mexico, Cuba, Africa, England, Berlin, and Moscow. He began government service serving as personal assistant to the chairman of the US Senate Subcommittee on Internal Security. His access and experience in the arena of international espionage and intrigue provide unique insights and vibrancy to his writings. After retirement he taught investigative techniques in the Criminal Justice Department of a Florida college. He is presently an instructor for the Florida Department of Law Enforcement's training program.