On Being a Conceptual Animal 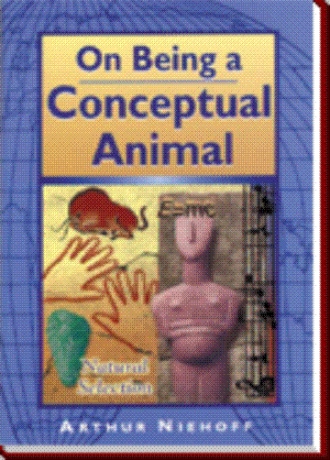 We humans like to consider ourselves special, both as individuals and as members of groups. Thus, it should hardly come as a surprise that those who have dedicated their lives to the study of humankind as members of the species, anthropologists, should be very interested in human uniqueness. They have characterized Homo sapiens and his ancestors as creatures which stand upright, make tools, speak in languages, have large brains, and other characteristics.

The human creature is also thought of as a rational, thinking animal. I perceive a human being as a conceptual animal. It does not perceive the universe directly but through a system of concepts or ideas. In fact, I will venture that a creature without concepts is not human. A skeptical reader may quickly ask, 'Are you saying that other animals do not think, do not have ideas?'

And my answer is, 'Certainly not of the same kind and to the same extent.' Here I will have to agree with the great anthropological philosopher, Teilhard de Chardin, that with man a qualitatively different thinking process has evolved, and which for better or worse is now the predominating force of the world. He thought it was a very progressive force. I am not so sure of that but I do believe that we are stuck with it.

The best we can do to characterize the other animals is to describe their behavior. Ethologists, persons who observe and describe animals in their natural habitats, characterize them by what they eat, carnivorous or herbivorous, or in what kind of social groupings they live in, multi-male or harem or other behavior. And here the questioning reader can ask, 'But how does that tell you that chimpanzees or lions do not think?'

So far as we can make out, they do not think extensively or in a complex fashion. Teilhard claimed that they thought with instincts. But also of course they think with the learning they get from experience and imitation. Whether they are the pigeons, deliberately trained by Skinner, or deer late in the hunting season, these animals have learned how to get food pellets and to be very wary of bipeds with firearms, not a part of their genetic make-up.

Admittedly, we cannot enter into the mind of a chimpanzee or lion, for one simple reason -- they do not have a language. There have been quite a number of attempts to teach the great apes to use human languages. But the results have not been clear. However, even if these animals did learn very well to react to human speech, that is far from the species having a language of its own. We know that all bisexual animals communicate, but it is communication of a simple sort, what we call by signs, rather than by symbols. Humans have evolved communication systems which depend on arbitrary meaning for the things and events of the world, and even to figments of the imagination.

The units of arbitrary meaning are called words and our entire universe, both seen and unseen, has been so named. Thus we live in a world of word-symbols.

We cannot even get the necessities of life through direct thought, whatever that is. We always have to go through the system of symbols, whether in our own minds or through communication with others. We have names for everything, including the food we eat, the work we do, and the sex acts we perform. We do not simply have sex with a mate whose odor pleases us. Rather we have to go through a complex procedure, which in Western culture is called dating. This may lead to getting together in a room where there is another series of prescribed procedures. Then if everything is satisfactory to both parties, we may get to what we are after, following the use of a tremendous number of words. We are indeed word animals and the word is the essence of an idea.

Most of us were early taught that we are special in being rational. We were supposed to dispassionately analyze world and life events and come to 'intelligent' conclusions. That was thought to make us superior to other animals. This idea is not so popular nowadays, after the era of Freud and Darwin and the study of anthropology. We now generally concede that humans also have many ideas, and act accordingly, because of emotion or other feelings.

On Being a Conceptual Animal is one of a series that tries to describe the human condition in an easy-to-read style. It is a book that attempts to define the specifically human way of experiencing the universe, through symbolic concepts. It is a book of 24 essays taken from life experiences of the author, a retired anthropologist. This is a journey we all take the difference of one person from another being the concepts.

It is ideal for the student who has become a reader to open up the expanding universe, and for the oldster who needs to keep learning as the world changes, for the young person it speaks of how much more there is to learning than simply getting a better paying job. And for the older person it is a way to maintain his/her human credentials.

Dr. Arthur Niehoff has been an anthropologist for 50 years. He got his BA at Indiana University and Ph.D. at Columbia both in cultural anthropology. He has done fieldwork in most parts of the world and has outlined many articles and books. He was a Fulbright scholar in India and has consulted many times for the International Development Agency and the United Nations. He worked as a village development advisor in Laos in 1959-61. He has taught anthropology at the University of Wisconsin, George Washington University American University and California State University, Los Angeles. Since his retirement he has been writing and publishing popular books in anthropology and history to explain how humankind got the way it is. In order to put pleasure into learning, his writing combines narrative with explanation and emphasizes clarity with simplicity.