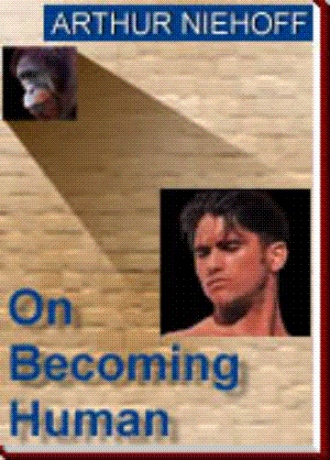 Four million eight hundred sixty-four thousand three hundred and twenty-eight years ago, a small naked person crouched over the carcass of a partially decomposed zebra. His name meant nothing to Squint, since he and his kind were unable to name things or people, or to understand such names. (The name Squint, and the others which follow, was given according to the common practice of ethologists, who are watchers of animals in the wild. For precise identification, they give descriptive names to the individual animals they are studying.) Squint and his fellows had a series of sounds which they emitted, depending on the circumstances, but nothing approaching the complexity of a language. However, Squint was a man because he walked upright most of the time, the defining characteristic of Homo.

Squint waved the flies off the right hindquarters of the carcass while trying to tear a piece loose. The animal had been dead for two or three days, and it was high. This made it easier to tear chunks off, and made the meat easier to chew. The smell did not bother Squint. He was used to two or three day old carcasses, usually those of animals killed by lions. In fact, he preferred the taste to that of freshly killed meat, not that he got much of that.

He worked a fair-sized piece loose, but then had to hunch over and chew through the gristle. Reaching up with his right hand he took the piece of meat from his mouth and raised his head to listen, his face dripping with the juices of decomposition. He heard the sound of footsteps in the dry leaves under the acacia tree, and quickly recognized that they were made by small feet, probably those of a jackal. Tearing another piece of meat from the strip, he began chewing. The footsteps came closer, and he stood up, his rock in his hand.

He was about three and a half feet tall, very dark skinned, almost black. He was covered with body hair......less than a chimpanzee or a baboon, but more than an elephant or a hippo. As the footsteps came closer, He clutched the rock tensely, at the same time turning slightly toward another tree, ready for a quick retreat. A small narrow nose poked through the brush and he relaxed. The jackal posed no threat. For a moment he thought of hurling his stone at it, but then changed his mind. Good throwing rocks were not easy to find. He had found this one at the bottom of a wash where it had fallen from an outcrop.

Still holding his piece of meat, Squint climbed to the top of an old anthill to see farther. It was midday and hot, so not many animals were grazing, though he did see a few wildebeests and some impala in the distance. They were feeding quietly and didn't seem particularly nervous. If there were any big cats or wild dogs around, they would be sleeping. Not far away was the largest acacia in sight. He figured lions were probably resting under it. Several vultures perched in the top of the acacia where they had gone when Squint had chased them away from the carcass, but he couldn't see any lions. They must have fed well, he thought, probably from the carcass. It was unusual for a lion group to get two animals at once, though it sometimes happened, most often when the lions found a mother with her young one, as they had today.

Squint climbed down from the anthill and turned seriously to the carcass. He had had little to eat for a couple of days......some wild figs, roots, and seeds, and a couple of lizards, all of which he had eaten on the spot. So the zebra meat was welcome. He ate fast to get as much as possible before the others arrived.

Highly informative, yet fun to read, On Becoming Human describes the long journey of humankind from the dawn of prehistory to the space age. In the first half of each chapter fact-based scenarios describe the cultural era; while the second half is in a question and answer format, derived from the first part. It truly reads like a novel, though being soundly based on anthropology and history.

'What makes this book so intriguing is the style in which the information is presented. Niehoff begins each chapter with a story, which describes a fictional group of pre-people at a given time in prehistory. These stories outline the day-to-day struggles that were required for survival, and add a tremendous amount of color to what might have been a dry delivery of facts and dates.

'Following the fictional scenarios, Niehoff uses a question and answer format to delve further into the subject, adds details, and explains how such vivid portrayals can be discerned from such limited data.

'In the introduction, Niehoff writes, he set out to create a book that is 'intriguing, informative and fun.' In my opinion he hit the mark.'

Author Niehoff (pen name) who has a Ph.D. in anthropology, has done research for 50 years in most parts of the world. He has also been a college teacher for 40 years. Since his retirement, he has been publishing books of history and anthropology, both fiction and non-fiction.