Little Horses of the Devil 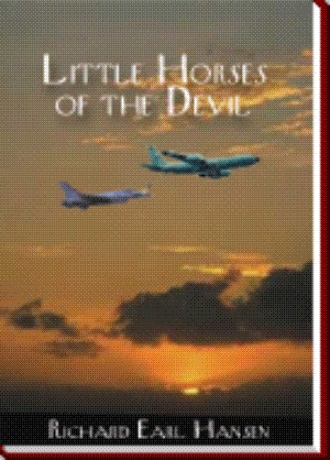 Mitch followed Joao who hardly spoke a word. Their passage through the under-construction pumphouse on the safe Macau side had been efficiently greased in advance. Joao's Chinese brother-in-law was on guard duty. Next, they traversed the meter and a half pipe in a half-crouch. Each was undismayed by moving through an arched tube hanging by suspension cables over the salt marsh and tidal water international border. Piece of cake, Mitch observed. The full transit through the generous arching dimensions was uneventful. They had entered into Peoples Republic of China. No Chinese patrols stormed up to challenge them. At the far side, they stepped down into the partly-finished blockhouse of the aerial pipeline's Red China terminus. From dawn when they had dropped Rita off to the present sunset, Mitch figured, there would have been two successive changes of Red China guards. As planned, the pimply-faced peasant recruit they presently found on duty had somehow been apprised of their coming. This rude country soldier drug-addict was expecting and received the usual pop from Joao. Mitch looked on thinking that it was almost too easy. Joao gently rested the guard's AK-47 across his chest after the junky hit dreamland. The 'sleeping guard pose' was completed.

These nervous formalities behind them, Joao guided Mitch to where they hunkered down to wait outside behind a pile of used wooden concrete forms. The musty, damp smell of cement mixed with the marshy odors from the salt-watered low land filtered up to assault their noses. There was a continuous background croaking of frogs in the reeds and cattails of the salty tidal creekside. The sun had not long set behind La-Pa Island but twilight was fading. Each in his own way fidgeted impatiently awaiting headlights of the truck expected by Mitch to bear his wide-ranging Rita on her return. She was due back from what Mitch classified as her dumb-ass clandestine foray into the PRC on a photo-journalistic trip for a story on the Chinese refugees from the mainland. The truck, they knew, could only come one way. . .from between the grassy dunes before them to the west. It would have to follow the two-tire tracked 'road' that wound among the low hillocks grown over with sea oats, and finally, circle down to the pipeline suspension bridge's high stanchion that towered darkly over Mitch and Joao.

'Why don't they come? Pretty soon, it'll be too damn dark to see whether it's Rita's truck and driver or the goddam border patrol,' Mitch hissed to Joao. Goose pimples raised the hair on his arms at the thought of facing an armed patrol.

Espionage by the reckless Communists of the Peoples Republic of China is nothing new. Behind in nuclear research, they have been at that spy game for some time. Back in 1962, atomic weapon parity with the Soviets and the West continued to elude Mao Tse Tung's China. Most troubling to him was the lack of compact H-bombs to fit his bombers and missiles. Mao directed his Peoples Liberation Army intelligence staff to devise innovative ploys to steal those nuclear weapon secrets from the United States.

That same year, Rita Mitchell, a struggling photojournalist, came to the islands of Portuguese Macau that bordered Mao's China coast for photo stories of fleeing Chinese peasants. Her husband, a US Air Force bomber pilot, reluctantly agreed to help. She planned a quick sashay into Mao's China to grab color photo-stories of emigre's daily braving gunfire to escape their miserable communist life. Too often, Rita knew, escapees' bullet-riddled bodies had been washing up on Macau's shores.

Bad luck! Dr. Sung of the PLA Intelligence Directorate snagged both Rita and her pilot husband, Mitch. On demonstrated threat of violent death, the two were blackmailed to provide China a newly operational, mini-version H-bomb, carried by Mitch's aircrew on the US Air Force's giant B-52 bomber. Rita is held in Canton as a blood hostage. Mitch is sent back to his USAF crew duties to deliver the weapon--on threat of instant bullets if either betrays the PRC.

To guarantee success, Beijing immediately began pumping its unlimited, worldwide intelligence resources and raw power to aid Dr. Sung. Rita and Mitch face seemingly insurmountable obstacles. Each tries many ways to resist. They stumble, yet keep trying. The threat of death by rifle bullet for Mitch scares the hell out of him. Rita is kept in line by a slathering guard's lustiness and bizarre appetites wielded on her by sadistic Dr. Sung. Can they solve their dilemma, preserve dignity and avoid treason against their country?

Richard Earl Hansen, Lieutenant Colonel, United States Air Force (Retired), a Command Pilot and Navigator, was Acquisitions Editor of the Air Force's professional journal on his retirement. He earned a BA at the University of Minnesota, MA at Syracuse University, NY, and pursued doctoral studies at Auburn University, AL.

Dick was born in St. Paul, MN and during WWII, he enlisted in the Army Air Corps in 1942 as an Aviation Cadet. Following P-38 fighter combat duties in the Pacific, at the war's end he finished college, married and raised a boy and a girl.

He returned to the Air Force when his Air National Guard P-Si fighter unit was recalled for Korea in 1951. He continued as a career officer. Then for ten years during the Cold War, he commanded nuclear-armed B-47 and B-52 heavy bombers of the Strategic Air Command.

In Vietnam from 1969 to 1972, he flew C-130 assault airlifters and commanded a squadron in combat. He won the Distinguished Flying Cross, the Bronze Star, several Air Medals and nineteen other decorations.

USAF flying duties kept him in Asia for seven and a half years. Travels took him around the world twice and he has had duty in, or toured, Africa, Europe, the Caribbean, Central America, Micronesia and Australia. In 1989, he and his wife, Nancy, whistle-stopped across the USSR from Leningrad to Vladivostok by rail on the Trans-Siberian Express.

Retired in the California Sierras, he has written mainly on aerospace and politicomilitary affairs with more than a dozen articles published in professional journals. He has completed three adventure-romance novels with aviation and space settings, and holds a U.S. Patent for an auto safety device. His son is a Lockheed test pilot and his daughter is married and lives in Texas. Dick's hobbies are tennis, travel and humor (He invents clichés).