The Warriors of Eda

Book Three of The Children of Enoch Series 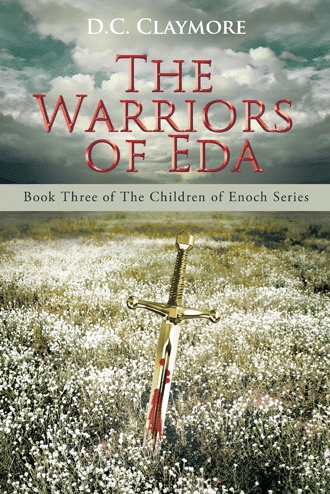 It was hell.
“Get in here!” Gorgos shouted.
Smug with bloodthirsty satisfaction, he observed the carnage below.
Gelz Wendel appeared at the entrance of the circled hallway on the upper floor of the Dower Social building.
“What?” A tight-lipped Wendel wished he’d never met Gorgos.
“Look at your precious Capital City now. Isn’t it glorious?”
The power hungry religious leader peered through the window. His heart felt like a cold, wet rock, heavy with defeat. His hatred threatened to explode. Events were not going the way he had planned. He had had the Dower Major assassinated so he could take over the high religious post. He was supposed to be in control, running things, not this murderous Vampeer. The bargain he’d made with Gorgos had backfired big time. And Gelz could see no way out. What had he done?
Blue sunlight beamed through the huge polysilicate window. Gorgos’ fangs glistened from the shaft of light. Puffing out his chest, he felt strong and powerful as the Alpha of a ravenous Vampeer race who was still seizing control of Rylaxon.
Below the five-story structure, squads of fanged minions roamed the streets. Military resistance in the Capital city had succumbed months ago after Gorgos and his followers had successfully attacked Celnar One, the northside military base. Most of the soldiers had been turned to advance the plan to create an army for the Darkness.

It was the Year of Our Father Enoch circa 2037. The days grew cooler as the pending conflict continued to escalate.
Rylaxon and its six moons had dwelt peacefully most of their existence. There was no need for the death and destruction it now faced. Diplomacy had always worked before to avert conflicts, but those were rational times. The rules were different now. Collateral damage was acceptable; in fact, blatantly encouraged. The growing Vampeer population was hell-bent on victory at all cost. Nothing could prevent the once great hyper-science civilization from its cataclysmic decline into chaos and all-out civil war.

It is 2037, and the Darkness and its army have invaded the world of Rylaxon and its six moons. The Vampeer population subjugates humanity, feeding on the helpless population and turning unwilling citizens into soldiers.

Ten-year-old Biron Coomra, a child created by a biophysicist from Rylaxon and a powerful witch from a distant alien world planet called Earth, is living on Eda, the still-peaceful fifth moon. Although he has lost his magical abilities, he still has numerous gifts that make him a formidable enemy of evil--and he is connected to the Triune, a powerful deity who sometimes speaks through him. Biron and his friends--the Warriors of Eda--are summoned to save a select group, the Chosen, and bring them to this safe haven. Meanwhile, Gorgos, the leader of the Vampeer forces and Biron’s archnemesis, leads his troops to destroy Biron’s birth city and force a showdown, and the queen of a race of inhuman hunters, the Vorax, has her sights set on the boy as well. The warriors must rescue the Chosen and raise an army before time runs out.

In this novel, the third in a series, a boy with unique powers faces enemies on multiple fronts as he and his friends seek to bring the chosen to Eda and protect their world from Darkness.

D.C. Claymore has been creating sci-fi fantasy tales since he was twelve years old. His Children of Enoch series is the product of more than thirty plus years of creative effort. He works as an IT administrator and serves as the pastor of a small congregation. He currently lives with his wife in Indianapolis, Indiana.

Visit him online at http://www.dcclaymore.com.