God’s promised visions and dreams, will test our faith 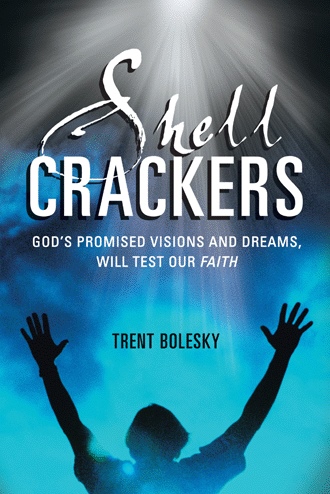 CHAPTER ONE – THE FINE THIN SHELL

What does it mean to “Crack the Shell”?
Much of the time I will spend in this book will be defining just what that actually means, but allow me first to put that concept into a concise statement.
There is a fine thin shell between this dimension that we live in and the dimensions of eternal things.
Some individuals will be selected by God to pass through that thin shell through a dream or a vision.
They will in reality … crack the shell!
My term for them is … shell crackers!

Will there be Christians living in the Great Tribulation? Answer: yes! The book of Revelation clearly describes several distinct and intriguing groups of saints living in this horrendous time. In this thrilling second book in the trilogy, Shell Crackers describes God’s process and purpose for one such group.

This is an active, thought-provoking work that has the potential to drive readers into a time of personal searching and reflection and ending in a deeper and richer faith! Discover for the first time the whos, the hows, the whats and the whys behind God’s fulfilling of His scriptural promises to send us visions and dreams soon!

You will be shocked, stunned, and amazed, and yet you will find yourself in a peaceful place, undoubtedly craving more. There is more to come in the third and final culminating thriller in this trilogy: Faith Bombs!

Trent has been married to Carrie for twenty years and has two daughters. His son, T. J., died in a car accident in 2010. Since that time, the Boleskys have sponsored dozens of mission trips. Trent is a senior pharmaceutical sales rep and loves to teach, ride bikes, and attend classic car shows.