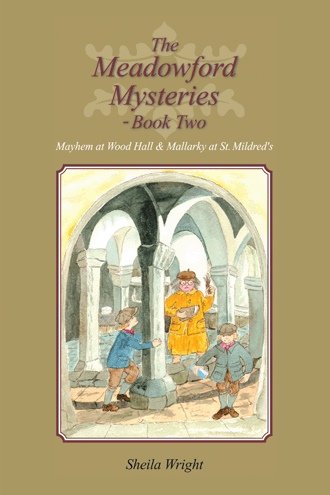 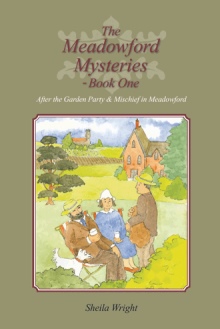 Wood Hall, former home of the late Hepzibah Hamilton-Tracy and scene of a distressing drowning, has become a Hotel. Surprisingly, saucy Amelia has been released from prison to earn her living for the first time, as receptionist. Newcomers to the village set tongues wagging, and it is not long before events take a sinister turn…. In the second tale, St. Mildred’s church is in dire need of repair and the vague but lovable vicar finds himself in his wife’s bad books …. but maybe fortunes can be turned around through a starchy lady archeologist who longs to research St. Mildred’s musty crypt? Discoveries in the bluebell woods may hold a clue. As usual in the Suffolk village of Meadowford Magna, the unexpected just keeps on happening…. What the critics say about the Meadowford Mystery series – ‘Author Sheila Wright has cooked up a perfect pair of ‘cosy’ mysteries set in rural Suffolk, England, in the 1920’s. Each has its own murder, but the characters and setting overlap. Mystery fans will love these traditional tales, which read like Agatha Christie or P. D. James. Wright knows her craft, and it shows.’ Blueink Reviews ‘Wright, born in Leicester, England, just after the era she writes about, creates entertaining characters who embody the mindset of society’s elite……the quirky personalities and antics of the characters are amusing and keep the tone light-hearted.’ Foreword Clarion Review Service ‘In the style of Agatha Christie, Wright fashions a story around a mysterious murder in an English country village. Wright follows in the footsteps of the old masters, and the prose lives up to its stellar antecedents. The hired help speak in their cockney dialect, whilst the upper classes converse with the delicate articulation one would expect of someone in their echelon. The characters have depth and presence….. however recognizable, the characters won’t be denied their charisma….the colorful images of life in post-Great War England elicit the charm of a bygone era. Once again, a formulaic element comes into play, but when done this well, it adds to, rather than subtracts from, the storyline. For anyone in the mood to solve a murder mystery while taking a pleasurable romp through merry olde England, it would be a crime to miss this one.’ Kirkus Indie – A review service from Kirkus Reviews Sheila Wright M.A. (nee Jones) was born in Leicester, England, in1939. Married to Ron, music teacher and Bandmaster, home a Tudor farmhouse. Seven children and numerous grandchildren. Sheila is an Anglican Reader, taught in village schools for twenty years, and in retirement gardens, paints, sings, plays violin and writes books. Look out for more stories of these eccentric villagers in Book One of the Meadowford Mystery series. In time, hopefully, you will discover further stories in Book Three! Cover pictures by the