Braket's People A Tale Worthy of a Telling 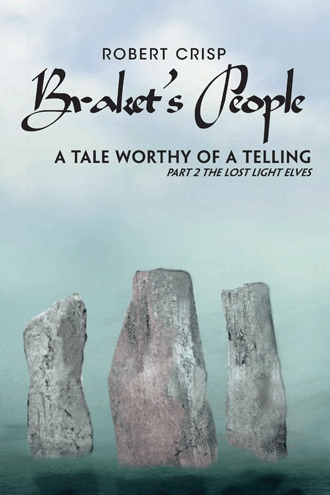 Just at the zenith, the Swift Passage emerged into the sunlight, and as soon as the tide caught her and the breeze filled her sails, she was cast off. She was a magnificent sight as the sun turned her sails into a golden glow and her wake looked like a silver road she was travelling down. As she sailed towards the horizon, a haze came over the water and the Swift Passage became as a phantom sailing serenely on an ocean of hope.Before she completely disappeared, every eye watching her saw her tilt slightly, as though she was about to sail into the aerthsky, but that was impossible, wasn't it. Drew and Barras looked at each other in total disbelief. No one spoke but the lord Vanir came to them and put his arms rund their shoulders and smiled down at them. They suddenly understood and felt a deep warmth and happiness for their lost comrades. 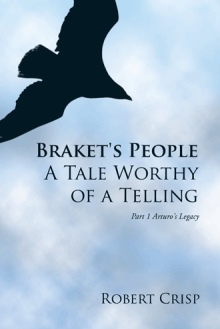 Braket's People A Tale Worthy of a Telling
Robert Crisp
$15.18

The book continues the tale of Braket or Drumlin Caddis, Sentinel, on his adventure with his friend Brambling. Brambling becomes the second sage of the age and leads a militia force against the Dark Elves. Drumlin Caddis meanwhile is helping Ylfe, a Light Elf he befriended in Arturo’s Barrow, a place where they were both searching, but for different things. They face the dragon, Gorgan, together and search for Ylfe’s lost elves. They discover them in a most unlikely spot, but there are other dangers and enemies to overcome before the tale reaches its climax.

Robert Crisp was born in Sheffield in 1945. He spent nine years in the army serving in various places around the world. After leaving the army, he spent three years as a firefighter, an occupation he enjoyed but sadly had to leave when he was made redundant. Luckily for him, there was a vacancy with the ambulance service near to where he lived. He successfully applied for it and traded one emergency uniform for one of another colour. He became the first paramedic station officer in the Yorkshire market town where he was then living and continued in that much loved profession until his retirement in 2009. His second book, Braket’s People, A Tale Worthy of a Telling, Part 2, The Lost Light Elves is the second of a two-part fantasy where elves and dragons meet.