The Lighthouse at Montauk Point and Other Stories 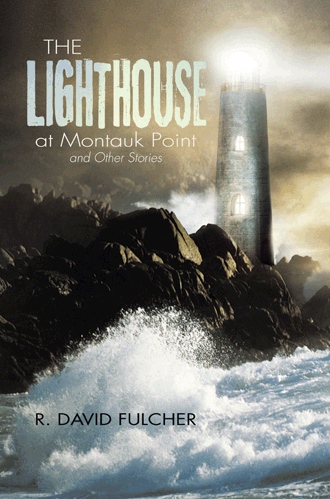 Ralf lay on his back and looked up into a world of unrivalled beauty. Four angelic birds swam above him blinding him with their brilliance. The first was a phoenix, enveloped in reddish-orange flames which left trails in the air as it descended. The second was a swan of eloquent composure which swam downwards towards Ralf in wide, gentle circles. The third, a marble dove, drifted through the air with such delicate motions it seemed not to move at all. The fourth was an eagle composed entirely of precious gemstones. The firebird and eagle moved to gently grasp Ralf's head and feet in their talons while the swan and dove took Ralf's wrists gently in their mouths. The angelic quartet bore Ralf upwards through a forest of crystalline formations which absorbed the light of the sun and shot it back into the air in a showering array of explosive color. Ever so gently the birds carried Ralf up and out of the rainbow forest. All at once, an incredible burst of heat shot forth blinding Ralf completely. Ralf thought, “Heaven must be the sun,” as he heard the flapping wings of something far larger than the bat creatures descend upon him...

The stories in this collection were written over several decades, and changes in the author's life had a profound impact on the voices and themes utilized in the tales. In these pages lie noble truths, profound awakenings, and in some cases, very unpleasant endings for some very wicked people. The variety of characters will keep the reader guessing as to what's next - the reader will encounter vampires, fighter pilots, greed-stricken murderers, and everyday people while reading this book. In the end, it is simply a collection of narratives for your enjoyment and entertainment.

R. David Fulcher is an author of horror, science fiction, fantasy and poetry. His first novel, a historical drama set in World War II entitled Trains to Nowhere, and his second and third books, a collection of fantasy and science fiction short stories called Blood Spiders and Dark Moon and another collection of fantasy and science fiction short stories entitled The Cemetery of Hearts, are all available from www.authorhouse.com and www.amazon.com. His work has appeared in numerous small press publications including Lovecraft’s Mystery Magazine, Black Satellite, The Martian Wave, Burning Sky, Shadowlands, Twilight Showcase, Heliocentric Net, Gateways, Weird Times, Freaky Frights and the anthology Silken Ropes. His passion for the written word has also inspired him to edit and publish the literary magazine Samsara, located online at www.samsaramagazine.net, which has showcased the work of writers and poets for over a decade. R. David Fulcher resides in Ashburn, Virginia with his wife Lisa, a native of Stony Brook, Long Island, and their six rescued cats Mitzi Lucifer, Whistler, Whisper, Inky, Shyloe, and Rocky Valentine.