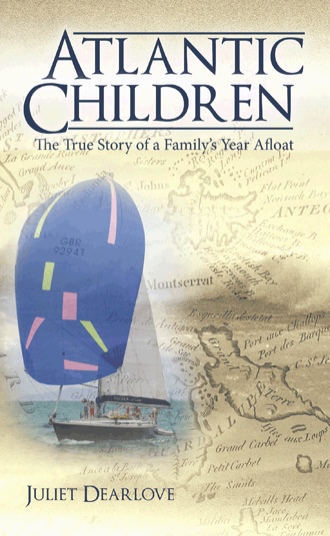 Our favourite island in the BVIs was Jost van Dyke. Even the name sounded enticing, and especially so when I read in the guide that the island was named after a Dutch pirate. We dropped our hooks in Great Harbour, a turquoise u-shaped bay of clear water edged with an even narrow band of white sand.

We tied the dinghies to the splintery pontoon and walked along the beach, the powdery sand dusting our toes. Then we slipped on flip flops and joined the hot grey road, walking up hill. Near the top, a short path led off to the left and there stood a framed open-sided tent and stacked faded plastic chairs, with a handwritten sign showing the times of the Sunday services. A gentle sea breeze lapped over the edge of the cliff.

At the top of the hill we stopped to admire the view and to enjoy the feeling of air around our sticky bodies, and then we turned to the right to descend into the next bay, White Bay. At beach level the children ran off along the sand, soon becoming small coloured specks against the whiteness, their footprints leading back to us. We peeled off t-shirts and sarongs and walked out into the gently shelving sparkling water. Around 50 yards offshore stood a reef, creating a perfect natural swimming pool, graduated in colour from the palest hint of blue near the shore to a sumptuous aquamarine at the coral wall.

Later we walked further along the beach, discovering a bar almost hidden by the bushes at the edge of the sand. It was decorated with shells, the white studding reminiscent of a Cockney pearly king, every inch of wood covered and strings of shells hanging from the roof. Ice cold Wadadli beers and Ting appeared from behind the bar.

In the afternoon we walked back up the hill. We stopped at the peak again, happy to see our boats lying still at anchor in Great Bay. It was always reassuring to know what the boat was doing, rather like having a teenager to stay. It wasn’t necessary to watch it constantly, but we didn’t like to leave it for too long on its own. We ate dinner at Foxy’s Bar, a local institution. The ceiling was made of woven reeds, and thousands of small white cards were threaded into the thatch. It seemed an unlikely mix; in this most bohemian of environments, people were reaching for their business cards.

Foxy sang to his group of guests, strumming a battered guitar. The children played in a large hammock at the edge of the beach, three at a time lying in it and the other swinging it with all their might. As the light began to fade they became black shapes against a charcol sky and it was time to find our boats, floating somewhere out there in the starry bay. 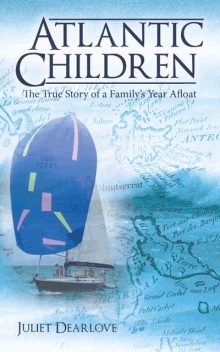 Join Keoma for the final part of her sunbaked journey, from St Lucia through the Caribbean, including experiencing many seriously "off the beaten track" places like Montserrat. Reviewers called the first part "Inspirational" and said "Whether you sail or not this book will really get you thinking about your life". After Antigua Race Week, it's off to Bermuda, then a second Atlantic crossing to the Azores, and finally home to Suffolk.

Juliet Dearlove qualified as a solicitor in 1993, and worked as an in-house lawyer in the City for 12 years before abandoning her career to go travelling with her husband and young children. Married to Charles since 1995, an engineer who runs his own renewable energy business, the family home is in Suffolk.

Keoma has been replaced by a Sigma 36, a sailing boat more suited to the beautiful (but shallow) rivers and anchorages of East Anglia.