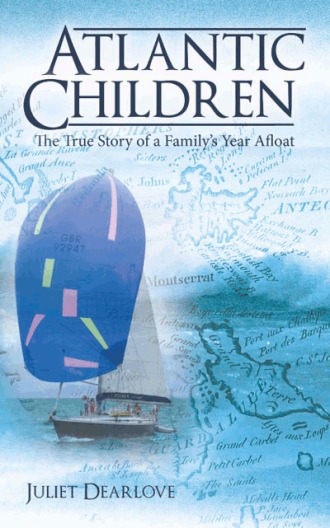 We climbed to the top of the cliff and I stopped to photograph Keoma lying peacefully at anchor beneath us in her tiny patch of bright water, an oasis in the rock. We agreed it would be a magical place to spend the night. Back at the boat I dived off the side again, swimming down, down, down, through the cool crystal water, then turning to look up at three pairs of legs waving above me.

In the evening we sat in the cockpit with a glass of wine, enjoying the spectacular high rock walls and the gently lapping water, and then ate supper at the big table below. While we were eating a slight swell developed and slowly increased. We realised that the wind had veered and was now blowing directly into the cala, which was having a funnelling effect. The breeze was building, now pushing the waves in, which hit the cliff behind us and rebounded against the stern, lifting the back of the boat and then jolting her forward. Hopefully the wind would continue to swing and peace would return. The thought of moving the boat, negotiating the narrow rocky entrance and ploughing out into the blackness, lurked in my mind. If conditions worsened, we would have to make a decision.

The boat began to buck around alarmingly. We became worried about the anchors. The children, perhaps sensing that it was best for them to be out of the way, climbed quietly into bed, as Charlie and I sprang into action. The priority was to let the stern line off and get the boat away from the wall of rock close behind us. Again, we had the dilemma of whether to abandon the rope, but it was the longest one we owned. Charlie stepped down into the pitching dinghy, standing as he pulled himself along the rope, hand over hand, towards the rock wall. As he disappeared into the noise and darkness I felt alone, responsible, even though I knew he was less than ten metres away. Above the sound of the raging elements, I heard him shout, “The rope's too tight! I can't undo the knot!”

"Cut it near the knot!” I screeched. He always had a penknife in his pocket.

"It's cut!” He was holding the end of the rope and I pulled with all my might to get him back. In seconds he leapt onto the swimming platform and tied the dinghy to a cleat.

I ran forward to get the anchors up. Our main anchor would be hoisted by the electric windlass, but how was I going to get the other one in? That skinny red rope wouldn't be long enough to reach around the windlass. It was under immense strain. I wanted Charlie to stay on the helm because his boat handling was much better than mine, especially in a confined space like this cala. I grasped skinny red. It felt taught and wire-like in my fingers, as though it could slice through them like cheese. But I stood up and pulled with everything I had. Charlie had slowly motored the boat forward, feeling the way until I was standing just above the second anchor. “Stop now!” I bellowed at him above the sound of the whirling water. The boat pitched up and down, the surrounding rocks closing in. I had an enormous sensation of power as I felt the rope yielding. The anchor must be breaking out. The adrenaline release felt like electricity coming from my spine, through my shoulders, as I pulled, and I kept on pulling. I couldn't feel my fingers, numb with tension, but ten slow seconds later I had the anchor on the deck. I felt like an Amazon. “First one is up!” I shouted over my shoulder as I pressed the button down on the windlass for the other. This one was an easy job, mechanical. The chain ground as it retracted.

"Both up now!” I shouted over my shoulder. Charlie motored the boat forward into the building waves. I couldn't carry the second anchor back to the cockpit locker in this weather, it was so cumbersome. I lashed it down. It had to be tied securely or it would grind into the wooden deck. I knelt, being thrown up and down, and did my best to tie it with the red line, but it was like a fairground ride without any restraint, and I was feeling physically drained. I steeled myself. I couldn't give up. As soon as I had done a temporary job I crawled back to the cockpit. Charlie donned a lifejacket, clipped on the harness line and headed to the bow to retrieve the anchor. I was on the helm now and we were out of the cala but the waves were worryingly steep. It felt as though the boat was climbing at an angle of 45 degrees as we headed up the oncoming waves, and I pushed the throttle forward for more power. Into the black night. Now I had time to reflect and I felt afraid and small in that large cockpit. The only consolation was that the children were in bed. How could they sleep through this?

My hands gripped the suede covered steering wheel, knuckles white and fingers like claws, my calves pressed back against the locker beneath the steering seat. We'd never been through such waves. They seemed endless. Were we making any progress or were we being washed backwards towards the beach? I was craning my neck to try to see Charlie on the foredeck, but it was too dark and I needed to devote full concentration to the helming. I prayed he was still there. 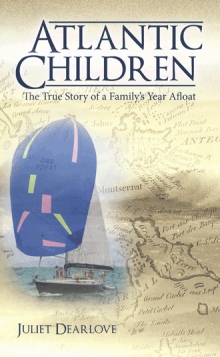 The idea of going sailing for a year wasn't even a dream. We were just an ordinary couple with two young children, and there were so many reasons why it couldn't happen. But a series of events over the course of a few months changed our thinking, and soon we were selling and packing our belongings, in preparation for a 12,000 mile journey from Italy home to England, via the Caribbean.

"Atlantic Children” is the story of how we left behind our family, friends, house and careers, exchanging them for a nomadic existence without the structure of work and school. We experienced the joy, drama and misery of sailing, the great outdoors in all weather conditions, extraordinary “off the beaten track” places, and many wonders of the natural marine world. Most of all, the book is about our family unit, the friends we made, how we coped and how we changed.

The story is divided into two parts. The first book tracks the journey through the Mediterranean, to the Canary Islands and across the Atlantic.

Juliet Dearlove qualified as a solicitor in 1993, and worked as an in-house lawyer in the City for 12 years before abandoning her career to go travelling with her husband and young children. Married to Charles since 1995, an engineer who runs his own renewable energy business, the family home is in Suffolk.

Keoma has been replaced by a Sigma 36, a sailing boat more suited to the beautiful (but shallow) rivers and anchorages of East Anglia.