Another Day From the World of Ro and Mo

by Rohan and Mohan Perera 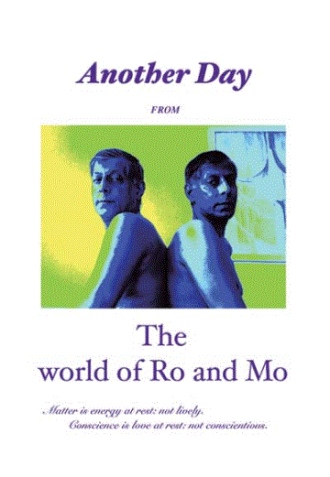 First hour: Freedom and Choice To contemplate the meaning of life, you need to have lived a little. The life you live is not the life you gave yourself, it is the life that was given to you. You had no choice: to be born or not, where you were born or whom you were born to, and what colour, creed, or gender you were born. Since your birth, every day and every moment of your life, you are presented with challenging situations that you have to make choices and decisions about. Life is all about fighting to be free from the life you were given. We cherish choice. Choice is life. At least in the (so called free world). We fight to preserve our free world and the United States of America is the leader of the free world. Man has been fighting for freedom ever since Adam had to decide if to go along with God or Evil, because in the beginning God created Adam and Evil, and God gave man freedom to choose to live God’s way or his own way. Man chose his own way. Evil. Although God...... Twelfth hour: Resisting Spiritual Growth In the beginning Man created the dream from the reality. The dream was without form and void; and darkness was upon the face of the dream. And the spirit of Man was hovering over the face of reality. Then man said, “Let there be delight”; and Evil appeared. And Man saw the delight and it was good; Man divided the delight from the reality. Man called the delight the dream and the darkness He called reality. So the evening and the morning were the first day. We love the dream and hate the reality; that is man’s all. Regardless how beautiful a maiden is, in time the beauty fades; but only with time can the spirit of a maiden prettify. But we believe in the body and the short life of the body. Eternal life is only a myth. We don’t stop to think, that if we are able to dream beyond the life of the body, we are more than the body; and if we are more than the body life is as long as you can imagine. John Lennon wrote; ‘Imagine there is no heaven, and no hell below’. Well, what did he imagine that was not heaven or hell? He answered the question when he wrote; ‘Woman, I can hardly express my mixed emotions and my thoughtlessness; after all I’m forever in your debt.’ ‘Please remember, my life is in your hands.’ If you are forever in debt and your life is in the woman’s hands; heaven or hell cannot ‘give peace a chance’. You can.... The Bottom Line Was Jesus joking when he said, “Therefore you shall be perfect, just as your father in heaven is perfect.” Jesus Christ. Matt.5.48 We have had many people say to us that, ‘If the world and all the people were perfect, the world and the people would be very boring. If the world was like the garden of Eden and the people were like Jesus and Buddha it would be boring as hell.’ If we have never been perfect how do we know that life would be boring if we were perfect? Is life interesting because we deceive each other? Is life interesting because some of us have more than others? Is it interesting to watch people starve to death? Is life interesting because we are not perfect? Why then do we call people who have been very interesting like, Mr. Bernard Madoff and Mr. Adolf Hitler criminals? How boring would the world be without such brilliant and interesting gentlemen like Osama Bin Landen? So the bottom line is..... 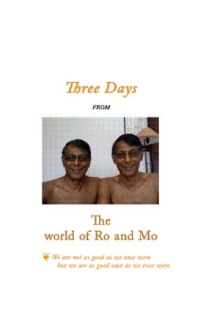 Three Days From the World of Ro and Mo
Rohan and Mohan Perera
$15.49

Born in Sri Lanka to Dr. and Mrs. Lorenz Perera in 1956. Rohan and Mohan Perera are identical Twins. Education St. Thomas' Preparatory School, Bandarawella, Sri Lanka. North Eastern College, Sangre Grande, Trinidad. Duff Miller London Tutors, London, England. Hounslow College, London, England. (Science and Biochemistry). Surrey University, Surrey England. (Chemical Engineering). Lister and Fairfield Schools of nursing, Hertford and Bedford, England. (Psychiatric and General Nursing). Activity Drawing from professional and personal experience (Psychiatry & Bible Study), and having experienced life in four countries: Sri Lanka, Trinidad, United Kingdom, and Australia; Ro and Mo write on life, Consciousness / Awareness. Currently Consciousness and Awareness Expert @ www.selfgrowth.com Expert Advice @ www.bizymoms.com Excerpt Advice Center. Current Project Book Three: What is Man About What is Man While we contemplate on what we have become aware of; we hardly pay any attention to the origin and the mechanics of awareness itself. We study behavior and the functioning of the brain, but awareness is not of the brain, nor is it of behavior. The brain may process and store awareness. and behavior maybe an outcome of awareness; but do we really know what makes us to know with? Consciousness is what makes us alive, and in consciousness is the secret of life. There is no life in atoms, molecules nor genes. In fact, they also do not really exist. All that exists in the universe is energy (light). Our body is made of energy, and we need energy for physical and mental activity. Yet, our consciousness is not matter nor energy. And without consciousness we would be as inanimate as matter. As we become more aware, our brain do not enlarge, but we do become more alive. So life means becoming aware. Therefore the more we become aware, the more alive we are. It is about the Vision of God; the Mission for Man. The Origin, Purpose and the Status of Mankind. We are Light. Body and Soul. The Force of Consciousness. The Source of the Fundamental Energy of the Universe, the Electric Force. The Particle and Wave Energy. The Matter and Radiation of Consciousness. Duality of all Existence. The existence of man's consciousness depends on the conscious-conscience equivalence. The material state of man is the prerequisite to consummating the conscious-conscience equivalence, and propagating and transforming into the pure conscious state of the highest consciousness that exists beyond the space-time continuum. Therefore: Existence is uniform to the Magnitude of the Conscious-Conscience increasing by itself. E=MC². And the increase is from the Source of all Existence, The Unconscious within us. A Consciousness without a Conscience is like electricity without a light bulb. Incredible Energy existing in darkness. A body without a Spirit, a Soul without Character. Consciousness is life and, matter is it’s manifestation. Greater the Consciousness, greater the Conscience, the Spirit (character) of the Conscious. Greater the Conscience, closer to the Source of Consciousness, The Great Spirit (perfect character).