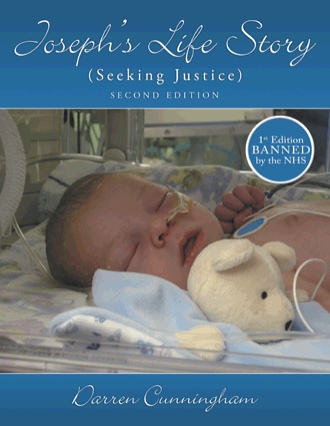 <>Joseph was our first child.  He was a planned pregnancy.  We started trying for a baby in September 2005 after my wife Charlotte came off the pill.  She had a positive pregnancy test on 1st April 2006 so she made an appointment with her GP to get it confirmed.

Everything about the pregnancy was perfect.  Charlotte did not even suffer morning sickness.  She was absolutely blooming.

Charlotte regularly attending her GP and all was well and was classed as a low risk birth.  Unfortunately Joseph was late and in the end the midwife decided to book my wife into

On the 21st December 2006 at 9am the contractions were lasting 90 seconds and were taking place every 5 minutes.  Darren and Charlotte decided to go to the hospital and got a taxi to take them to

At 5pm the midwife broke Charlotte's waters and discoloured water poured out.  The midwife said this was “common for late babies”.  The midwife brought in a resuscitation trolley and said it was a precautionary measure for safety only.

At 2am, as Joseph came out there was what I can only describe as a tidal wave of meconium and blood.  In the middle of it all Joseph was there blue and motionless.  He was held suspended while the midwife cut the cord. 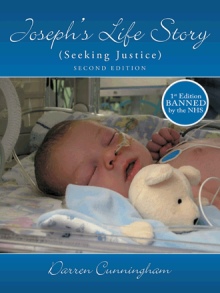 The book 'Joseph's Life Story' is a true and honest account complied by the parents of the life of Joseph L Cunningham, a baby boy born on the 22nd December 2006, weighing 8 pounds and measuring 20 inches long.  It also includes the struggle to learn the truth of what happened during labor and their effort to seek justice.

The opening chapters give the parents emotional account of the events during labor, the days after while Joseph was in hospital until he died 38 days later and the account of Joseph's funeral.  The book goes onto reveal the effort to seek an explanation as to why Joseph suffered injuries during birth and to have the NHS admit liability.

The purpose of this book is to raise awareness on the difficulties that can arise during labour and the need for the correct decisions to be taken at the time.  This is to also highlight the effort that was required by the grieving parents in order to learn why such a tragedy occurred, what could have been done to prevent it and to have someone admit fault.

The author of 'Joseph's Life Story' is Darren Cunningham the farther of Joseph Lloyd Cunningham.  Darren took the decision to document the days of Joseph’s life soon after he realized that he was beginning to forget the finer details of Joseph’s short life when he was alive.  He wanted to record the events so he could share them with his family and his future children when they were old enough to understand that they once had an elder brother.

What initially started off as a personal document began to take shape fuelled by the letters and e-mails that Darren and his wife Charlotte were receiving in relation to their compensation case against the NHS.  It became apparent that avoidable mistakes had been made and there were lessons that needed to be learnt or other babies in the future would meet the same fate as Joseph.

Darren and Charlotte grew up in and met while in college.  They married in 1996 and decided to move to the following year when Darren received a job offer.  worked for the Anthony Nolan bone marrow trust for over 6 years before resigning while pregnant to become a full time mother to look after Joseph.  Darren continues to work for a leading bank as a Project Manager in .