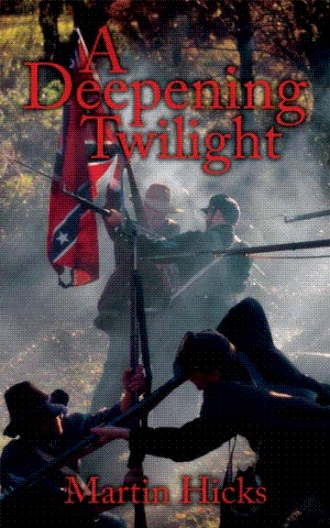 "It was clear that the other boy, Luke, was dying, for when Daniel Ryan had gone over and looked at him he had that yellow-grey pallor about him that came when the hand of the lord was over someone. The boy’s breathing was shallow and he was drifting into insensibility, even as the men of Company B who were still in the yard, gathered to look at his end. Daniel glanced around them and saw mouths set in grim lines as though this one forlorn boy’s obscure death somehow epitomized what the Yankees, and Sheridan’s men in particular were doing in Virginia now, for it was clear deliberate war on people like these. Few words of retribution were spoken, but it was obviously the thought on plenty of the men’s minds as Luke Brewster slipped into death. Above him, the rays of the re-appeared autumn sun began to lengthen the shadows across the yard, while the ashes of the buildings, where he had once lived, played and grown, eddied and puffed around on a fitful breeze."

A Deepening Twilight, the sequel to “A Season for Killing,” continues the story of Daniel Ryan, an Irish immigrant serving in Robert E. Lee’s confederate Army of Northern Virginia during the American Civil War. The novel relates Ryan’s experiences in Virginia’s Shenandoah Valley, and in the trenches around Richmond, during the closing months of the war. As the army and the south sink towards defeat, he, and the remnant of his Georgia company continue the struggle against the odds, experiencing at first-hand how war can reveal the best, as well as the worst, of those on either side. In the midst of the conflict and suffering, Daniel Ryan finds that his relationship with the war widow Rebecca Channing is not as dead as he thought.

Martin Hicks lives in Fraserburgh in Aberdeenshire, Scotland having worked there previously as a Primary School Headteacher as well as in Special Needs Education. His writing is the product of a longstanding interest in the history of that period of the nineteenth century and is thoroughly researched in respect of the events it portrays. The author is currently working upon a further title in his series of civil war novels.