A Season For Killing 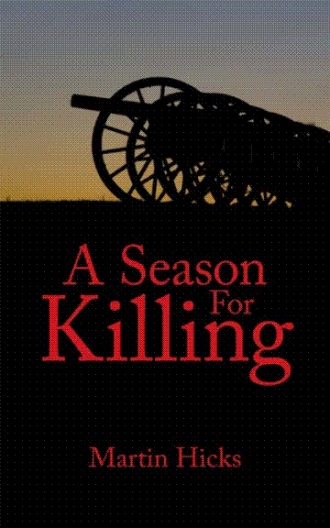 "The group of horsemen drew closer to the long ranks of ragged men, to the resounding crashes of an artillery salute. The guns fired in sequence and Daniel continued to watch as the smoke drifted down across the field, briefly engulfing some of the formations of  infantry. Then he saw that the horsemen had stopped just short of the open side of the formations of soldiers, all except the general who walked his grey horse forward a few more steps before halting also. He paused and then removed his hat sweeping it slowly down to his side to sit there bareheaded. For a brief moment, all was still as Lee saluted these, his men, who had come back to him.

The reply was almost immediate and electric. Across the meadow, the men who held those torn red battle flags raised them high in the air and brandished them again and again. Daniel looked around at the bobbing red banners, which seemed almost as though they had life, will and energy of their own, as they waved up and down. Simultaneously, from the throats of those ten thousand plus men came a screeching yell of salute. The shrill cry rose in the air and reverberated around the meadow to the hills beyond, as Lee nudged Traveler into motion once more and moved forward to greet his soldiers.

Daniel yelled with the others, their voices shrill and loud, blending into the general wave of sound and then the companies and brigades all around the field raised their newly polished muskets and waved them high in the air. No formal salute this, no presenting of arms in motionless military ritual, but a heartfelt release of pent up tension and emotion as the men acknowledged their leader.

With this maelstrom of noise and activity going on around him, Daniel Ryan’s heart was full. As the general and his party walked their horses closer down the long ranks, he felt tears well up in his eyes. He checked himself, feeling suddenly self-conscious and foolish, but, on looking around, he could see that he was far from alone in his reaction. Everywhere in those formations of hard used veterans, all of them men who had seen the full brutality and horror of the war, there were tears streaming down cheeks. Some, like Edwin Jones, openly wept and even the laconic and cynical Otis Ballard had tear stains on his face as the tall Virginian on the grey horse drew near."

"A Season for Killing" is told from the perspective of Daniel Ryan, a corporal in Robert E. Lee’s Confederate Army of Virginia in 1864 during the American Civil War, as the brutal campaign in the spring and summer of that year unfolds.  Ryan, an Irish immigrant in a Georgian brigade, serves heroically in a succession of battles as the Confederate Army is forced back through Virginia to their capital city of Richmond.  Ryan witnesses the steady decline of his Confederate Army, yet he fights on as best he can.  What we find in this novel are the perennial issues of conflict, turmoil, futility and loss, contrasted with the finer human qualities of bravery, love and hope.

Martin Hicks lives in Fraserburgh in where he was previously a

Primary School Headteacher, working latterly in a special needs school. He is currently

writing the sequel to this novel.