The Horse in the Attic and The Mystical Doorway

by Beverley A. Lawrence 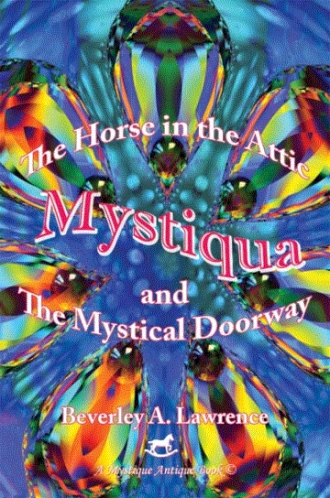 Dee and Bree tripped over their feet as they made their way back up the kitchen stairs, through the upstairs hall and up to the attic.  Upon reentering, the mirror “spoke” to them once more….

A comforting reassurance had now swept over the girls and they were no longer frightened by the mysterious knocking.

took Bree by the hand ~ the empty one ~ and the girls faced each other confidently, their reflections bouncing back at them from the old, dusty paint-splattered mirror.   held the Lacirok out in front of them.   It glowed with such fury ~ sparkling and tingling in her hand.

As the knocking continued, the girls nodded to each other, looked down at the Lacirok, and spoke the MAGIC words ~ in unison….

The knocking ceased.  The girls looked into the mirror.  As dusty as it already was, it began clouding over.  Mystical mist began seeping from it ~ surrounding them with its magical colours.

The girls recognized the pattern.  They had seen this mist before!  They smiled and held each other tightly as the rainbow of colours enveloped them.

Nodding, grinning, all could muster was, “Wow! 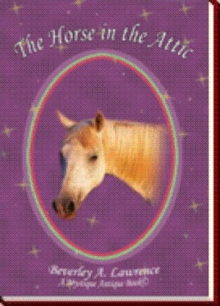 The Horse in the Attic
Beverley A. Lawrence
$13.95

The Horse in the Attic and

transports sisters Dee and Bree to a

far-away world… a land of incredible

beauty and spectacular customs ~ a land of mystique and ritual, of costume changes and galloping through forests and caverns ~ a land where they encounter familiarity in the unfamiliar,

where they learn, where they believe, where they delight in the disbelief of experiencing dreams-come-true.  The sisters dare to do and achieve,

with a little help from some extraordinary friends, in a land of sparkling delights, resplendent in its exquisite natural beauty.  Enter a world of intrigue as you, too, enter this mystical, marvelous realm.  Come

visit this masterpiece of nature with us.

“Welcome to OUR world!”

Beverley Lawrence lives in her native , a suburb of Montréal (Québec), with her husband, two lovely daughters and adoring cats.  Her joy of writing and her passions for family, photography, travel and living life bring knowledge, humour and entertainment into her storytelling and her creations.  Having enjoyed the many learning experiences offered working in different métiers, and considering herself very fortunate to have three very special, if invisible, letters appearing after her name, Beverley has found the road to fulfillment enlightening and continues to grow in her literary adventures.  Her family is very dear to her and her writing is a life passion.

“Love of Life is paramount;

the world is such a better place

when you enjoy what you do!”