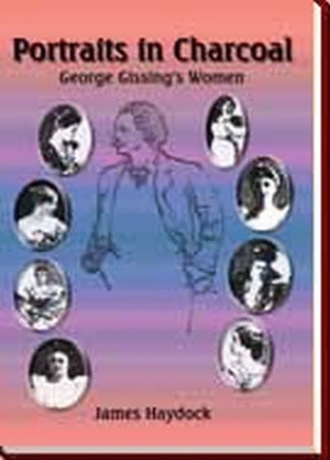 The telegram read, “Mrs. Gissing is dead. Come at once.” Gissing returned to London by train from Sussex, a journey of three hours in wintry weather. The next morning, Thursday, March 1, 1888, he went to 16 Lucretia Street, Lambeth, where his first wife had spent the last days of her life. She was Marianne Helen Harrison...his name for her was Nell... whom he had met in Manchester in 1876 and married in 1879. Now at twenty-nine she lay dead in a squalid room that spoke the barrenness and misery of her life. Gissing examined the details of the room with detached precision and recorded them in a diminutive script in his diary.

On the deathbed, rumpled and dirty, were soiled rags for blankets. Under the bed on the bare floor were the only shoes the woman owned, a pair of cheap boots. Hanging on the back of the door was a tattered dress partly covered by a threadbare coat. No other clothing was anywhere to be found even when he searched for it. On a table were several wrinkled pawn tickets. They revealed that during the summer, perhaps unable to think ahead, Nell had pawned her winter clothing. In a bureau drawer Gissing found some scraps of stale bread and some rancid butter. It was the only food in the shabby room with not enough heat to soften the butter. In another drawer he was surprised to find the love letters he had written Nell during his year in America. She had saved them all, as well as a faded photograph of him, and their frazzled condition showed that she had read them often.

Near the pawn tickets were three grimy “pledge cards” given to her by female temperance workers who had met her probably in the streets. On the pledge cards were printed promises to abstain from alcohol. Nell had signed the cards on the proper line within the last six months. These pledges, made in good faith but quickly broken, tendered silent and pathetic testimony of the struggle she had lost. Gissing felt the cards were proof that she was trying to resist the pressures that had killed her while still a young woman. For most of her adult life she had been an alcoholic and a prostitute. Any money she was able to earn had always gone to buy cheap liquor that could bring a few hours of escape. The record does not show that she was ever addicted to drugs.

While the alcohol perhaps made her life easier to endure, she died in a bleak and hostile environment without friendly care of any kind. Her landlady disclosed that on her deathbed, dying by slow degrees, not one person came to assist her. Nell had a few known associates, but they were so vile in appearance (according to the landlady) that she had forbidden them to enter the house. Looking into the dead woman’s ravaged face, fringed with full dark hair, Gissing was uncertain whether he was able to recognize it. Only the fine, white teeth remained the same.1 5

Half biography and half critical study, this book about George Gissing is for the general reader. It draws a parallel between the women in Gissing’s life and the women in his novels. His books span the last two decades of the nineteenth century and are memorable for their portraits of women. Only a few women played active roles in Gissing’s life, but all exerted a lasting influence. Their imprint allowed him to portray women vividly and with unerring realism, though at times in variable tones of gray...in charcoal. Gissing’s feminine portraiture, rendered in shades of somber experience, is one of the most striking features of his work and one of the most valuable for the reader of today. It derived from his intense and abiding interest in the women of his time and the way they lived their lives. His portraits of women, warm and human, were shaped in all their detail by an essential sympathy that made them neither topical nor contemporary but timeless. Some of the women in his life became models for fictional women as alive today as when he first created them.

James Haydock received his bachelor's and doctoral degrees from the University of North Carolina in Chapel Hill and the master's degree from Baylor University in Waco, Texas. He did graduate work also at the University of California at Los Angeles and postgraduate work at Yale University. After that he taught on the college level and wrote. A friend persuaded him to share what he knows about George Gissing’s life and work. The result is the present book.