Prevention from the Inside-Out 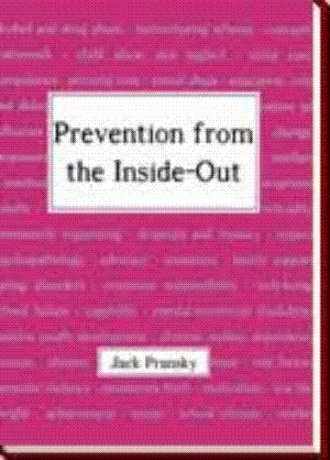 You could have knocked me over with a feather.

In 1991 when I first became exposed to this new inside-out approach to the prevention of problem behaviors, what I heard went against everything I believed. All my life I had fought against oppression in the form of violence against others, in the form of poverty, in the form of a system keeping wealth and power consolidated in the hands of a few at the expense of the many, in the form of drug pushers (including the corporate kind) and environmental profiteers who put profit over people’s health. Even more, I worked to improve conditions in the more immediate environments of family and school to build healthy self-perceptions in young people to reduce problem behaviors. Now I was being told the answer lay within? No way! I was a trained community organizer. I had written a book, Prevention: The Critical Need (Pransky, 1991), espousing that the answer to prevention lay primarily in changing external conditions. This direction seemed crystal clear. How could I accept that instead of changing external conditions that put people at risk and building resiliency through creating healthy environments, my focus should be the internal, within people’s minds? I could not fathom it.

Still, I couldn’t turn away. Why? Because it worked better than anything I had seen in all my years in prevention. I had always been about what works. Besides, this new approach sounded intriguing. I had begun traveling my own spiritual path, and this understanding seemed aligned. It had a ring of truth. As my initial book was about to go to press I managed to squeeze in a little something about it, but at the time I saw it merely as a new, innovative approach. I didn’t realize it was a completely new paradigm (a term I do not use lightly), a completely new direction, a completely new way of conducting prevention business, or any business for that matter. I had been looking at problems and solutions from the outside-in; this approach required looking from the inside-out. It played tug-of war with my mind, because no way could my thinking about prevention change—or so I thought.

Yet that is precisely the point: My thinking changed! The fact of thought— that no matter what terrific things we do in the name of prevention, even if precisely researched-based, if people’s thinking does not change, their feelings and behavior will not change—is one of the two critical elements I realized I had missed entirely. And I was not alone. Nearly the entire field had left out the key variable that determines people’s behavior. The significance of this cannot be understated.

I realized, too, that I missed another critical factor. I realized that subtly, inadvertently, certainly not intentionally, I saw the people with whom we work as incomplete, not whole—unless we did something with them or to them or for them. This shocked me, because I had always insisted on seeing people’s strengths, not their deficits. But a closer look revealed that I believed if we only changed unhealthy conditions or created healthy conditions then people would do fine. If we provided them supports or skills with the right information then they would do fine. If we built resiliency or healthy self-perceptions then they would do fine. In other words, people weren’t fine or whole unless we did something. This was humbling. Again, I was in good company. Nearly the entire field appeared to miss that within everyone’s spiritual essence, so to speak, they are already perfectly whole and complete, that when people are connected with their "Health" or internal well-being or "spiritual essence" they do not commit the acts we are trying to prevent. Now I see that everyone has within them all the wisdom and common sense they will ever need to overcome any problem behavior or difficulty they encounter. Instead of doing all these things from the outside in hopes it will strengthen them on the inside, we could help them realize the inside directly—help them see they already have all the resources within that they will ever need to make it out of their plight. We could help them see their innate essence that provides automatic strength and hope and what separates them from it, so on their own they would be guided toward Health and well-being and away from problems.

I consider these two points so crucial that I repeat them in a slightly different way in Chapter II.1 But remember, none of this is the real reason I changed. The reason I turned away from a focus on external conditions and inward toward the human mind and human spirit is because it works better. People change to a far greater extent. Their lives truly become healthier on a grand scale. Their relationships improve. And these people, now changed from within and seeing themselves and their lives from a new, healthier perspective, then work to create healthier conditions and change the oppressive conditions in which they find themselves. This is the paradox. By focusing within, the external ends up changing to an even greater extent than if we focused directly on it. The more I explored this inside-out direction, the more I had no choice but to completely change my approach to prevention.

Does this mean I am suggesting that the outside-in focus practiced by most of the field and extolled in Prevention: The Critical Need is the wrong direction or a waste of time? Not at all! Outside-in prevention is helpful to people; it does reduce problems—to a certain extent. All I am saying is, from what I have observed first-hand—and I now speak from personal experience as well as the experience of hundreds of others around the country and world who practice it—prevention from the inside-out has far more life-changing impact. Therefore, if we are truly interested in reducing problem behaviors and enhancing well-being, it is critically important for the field to thoroughly examine this inside-out approach and become trained in it. Then prevention and health promotion practitioners can make their own informed decisions.

All I want is equal time and resources. I would settle for 50% of prevention time and resources to be devoted to the inside-out approach. Right now it is probably more like .01% (that’s a wild guess). The scale needs to be tipped.

Because I have seen its results firsthand, both in myself and others, I gave up trying to convince others of the worth of this inside-out approach. "Convincing" is not this book’s intent. Its intent is "exposure." The message will either strike you or it won’t, and if it doesn’t it won’t matter because you will continue to do what you are doing. But if out of it you become as intrigued as I was, or have an insight that opens your eyes to something new, then on your own you will want to pursue it further, as I did. And if the field of prevention begins to change a little as a result, so much the better. 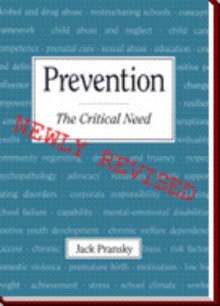 Prevention from the Inside-Out offers a complete paradigm shift for the fields of prevention, human services, community work, social work, human resources, and education. It shows how our traditional outside-in approach has only brought us so far. This book is about what truly creates change. It is about how to unveil people's innate Health and wisdom to preclude problem behaviors such as violence, substance abuse, child abuse, delinquency, school problems, absenteeism, lack of motivation and productivity, and others. It reveals that for people to change such behaviors they must have new insight that changes the very way they see life and creates a shift within their consciousness. It helps people live in well-being and with reduced stress. It draws upon the spiritual. This book presents a solid case for working from the inside-out, the philosophy behind it, the research supporting it, how to apply it, and offers extensive interviews with people whose lives have changed through this approach and with practitioners of it. This is a must book for anyone who works in these fields.

Jack Pransky, Ph.D. is founder/director of the Northeast Health Realization Institute. He authored the books, Prevention: The Critical/ Need (2001/1991), Parenting from the Heart (2000/1997), Modello: A Story of Hope for the Inner City and Beyond (1998), and co-authored Healthy Thinking/ Feeling/Doing from the Inside-Out prevention curriculum for middle school students (2000). His latest, Prevention from the Inside-Out, is currently in press. Pransky has worked in the field of prevention since 1968 in a wide variety of capacities and now provides consultation and training throughout the U.S., and internationally. Jack was instrumental in creating the first state law (Vermont) requiring state agencies to plan for and conduct prevention practices, and he worked on developing national prevention policy. He is also cofounder/director of the nonprofit consulting organization, Prevention Unlimited which created the Spirituality of Prevention Conference. He now specializes in Health Realization and prevention from the inside-out. In January, 2001 his book, Modello received the Martin Luther King Storyteller's Award for the book best exemplifying King's vision of "the beloved community".