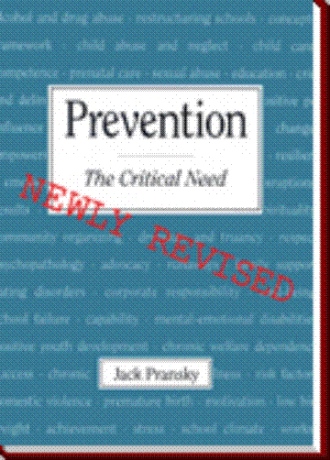 I have been so grateful for the response to this book. So many people from around the country...and world...have told me how valuable this book has been to them; that they continually use it as a resource and reference, that it helps them write grants, that it helps them with prevention program development, community development and prevention policy development. A review in New Designs for Youth Development called it "a prevention classic that will guide the field into the 21st century"; that Prevention would "inspire--its readers to push beyond current accepted theories and practices in the human services arena" (Miller, 1991, p.28). It has been used a prevention text in over twenty-five colleges and universities, and in many state-sponsored prevention courses.

So much has happened within the past decade in the field of prevention, though, that parts of this book had begun to get a bit dated.

Since Prevention: The Critical Need first appeared at the end of 1990, the prevention field has undergone some dramatic changes. When I began writing this book in 1987, the public knew very little about prevention. Very few politicians spoke of it. No book existed that presented an overview of the prevention field. No book existed that compiled research-based, prevention-related results and attempted to translate them for practitioners in the field. No prevention practitioners had prevention credentials; they were low-paid and most served in the field because they loved the work or believed in its importance.

Now, in the year 2000, the general public is reasonably familiar with the concept of prevention, if not how it works. Politicians, including an entire presidential administration, regularly speak of it, if not putting enough money where their mouths are. The field is guided by research. Many packaged prevention programs abound, some highly marketed. Prevention credentialing is in full swing in many states. And pay for prevention professionals is still low.

Yet the fundamental approach to prevention as practiced in the year 2000...that is, the fundamental approach to "outside-in prevention," which nearly the entire field practices and which this book primarily is about...has not changed. Nothing has come along to alter the basic tenets of the prevention field as currently practiced. Nothing has come along to prove wrong the "conceptual framework of prevention," the "prevention wheel," or "prevention strategy pyramid" that appeared in the first edition of this book. While the terms, "risk," "resiliency" and "assets," and "outcomes" and "research-proven approaches" have become the guiding forces in the field over the past decade, the prevention practices these suggest are really no different than the practices promoted in the first edition of this book. This is because this entire book is a resiliency-focused approach in terms of building healthy conditions that promote well-being, and it is also a risk-focused approach in terms of changing detrimental conditions that contribute to problem behaviors.

So what does this mean for the prevention field now, compared with when the first edition appeared? In short, we know now about more programs that work, but what we know works has not changed.

In the year 2000 what is dramatically different is an understanding that the field knows very little about as yet, and which the first edition naively presented as simply another effective approach to prevention. I, myself, had only been exposed to this new understanding immediately before the first edition went to press...if fact, it was the last thing I added to the book. At the time, I did not realize that this approach...now often referred to as "Health Realization"...represented an entirely different paradigm for prevention, an inside-out approach. This new paradigm, however, cannot be given adequate presentation here within this volume to the depth it deserves. Thus, a new volume will appear, hopefully in 2001, called [working title] Prevention (II) From the Inside-Out, that will hold vast implications for the prevention field.

Until then, does that make what appears in this book obsolete or irrelevant? Not at all! This book is about prevention from the outside-in, and despite where the field has evolved in my view it can gain a great deal from what appears here. Many people have told me that despite the evolution of the field, Section I, Chapters 1-6, and Section VI, Chapter 44, still provide as relevant an overview of prevention and a conceptual framework for operating within it as can be found. Sections III and IV, Chapters 32-39, still provide as relevant and necessary supports for practitioners as can be found. To my knowledge, there is still no other book that covers the scope and breadth of prevention that this book does.

The question has been whether Sections II and V, Chapters 7-31 and 40-43 are still relevant, now that the field has begun to be guided by research-proven strategies and that much new research has come to the fore. Yet if one looks closely, as suggested above, this new research offers little more than we already knew, little more than what appeared in these chapters in 1991. [However, Chapters 4, 24, and 42 have been substantially revised from the first edition.] Plus, the detailed interviews with prevention practitioners on the inner workings of various facets of prevention are still as relevant and instructive as they always were. These chapters can be thought of, then, as providing much of the original prevention research, the initial model research, and important lessons learned from it...which in this book are sometimes called "principles" and sometimes "elements" of effective programming, and are the same lessons as the new research shows. Unlike a decade ago, because "research-proven programs" are now discussed adequately in a number of other publications, the need no longer exists in the 2000s to highlight all the newly-researched programs here. Instead, at the beginning of Section II, I point the reader to sources where detailed, updated information can be found.

One important caution is in order. The value lies not in replicating these research-proven programs, but in learning from them, learning what makes them work, learning what specific elements contributed to their effectiveness, so no matter what program we implement we will have the best chance to be effective. Unfortunately, in my view, in the year 2000 various agencies of the federal government have misinterpreted, albeit with the best intentions, the value of these programs for funding direction. To achieve the best results the idea is not to limit funding to only these programs that have had large research grants behind them so we can replicate them, but instead to apply the elements of effectiveness learned by these programs about what makes them work to whatever approaches we develop in creative partnership with communities.

Now that the prevention field has begun to be guided by what this book originally pointed to, I was faced with a decision. Should I let this book die on the vine? Should I completely revise it, even though my personal interests now lie in inside-out prevention? I decided on a third possibility, to keep this book pretty much as it was, while culling out some outdated and nonessential material and providing an update of the more compelling new directions in the field that appeared in the past decade.

I still feel blessed to be part of 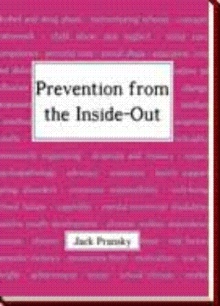 Prevention from the Inside-Out
Jack Pransky
$26.95

is the single best prevention resource around. When the first, critically-acclaimed edition was published in 1990, it was the first book to present both a conceptual framework for prevention and translate the research on "what works" into practical applications for practitioners in the field. It essentially defined the parameters of the prevention field in all of its aspects. A decade later, this book is still as relevant and important as ever. This new edition brings the evolution of the prevention field up-to-date. It offers comprehensive, practical strategies and solutions to prevent the social problems that beset our society, such as violence, substance abuse, crime and delinquency, child and sexual abuse, teenage pregnancy and suicide, welfare dependency and more, and it finds the common ground between all these problems and the promotion of health and well-being.

has been used as a textbook in over twenty-five colleges and universities and in a number of state-sponsored prevention courses. Many practitioners have commented that it has been an invaluable resource for grant writing, for designing prevention strategies, and for the planning, development, evaluation, and marketing of prevention efforts. It also offers the unique feature of extensive interviews with prevention visionaries such as George Albee and Ben Cohen of Ben & Jerry’s, and many top, successful, creative prevention program developers and implementers. It is a must for any human services bookshelf.

Jack Pransky, Ph.D., is a national and international prevention consultant and trainer who has worked in the field of prevention since 1968, in a wide variety of capacities. He is author of Parenting from the Heart, Modello: A Story of Hope for the Inner City and Beyond, and co-author of Healthy Thinking, Feeling and Doing from the Inside-Out, the violence and abuse prevention curriculum for middle-school students. He is founder and director of the North East Health Realization Institute, and co-founder and co-director of Prevention Unlimited, which created the spirituality of prevention conference. He now specializes in the inside-out approach to prevention, Health Realization.