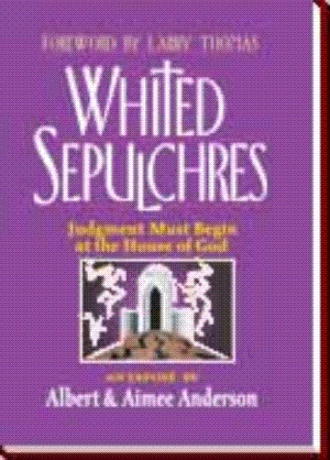 This is all such a joke; a very, very cruel joke at the expense of those I love very much. Two people that have been there through the deep valleys of my life and many others in the church, they have always helped and loved and been a part of our body for many years -- or at least they thought they were. I am very angry to see them wounded so deeply. I guess this goes along with our "throw away" society where "compassion and unconditional love" aren’t considered.

I submit to you that you have ripped our body apart -- this same body that the Bible states is one of another and if one suffer we all suffer - this same body that you preached on for weeks on the importance of each "part" -- is now bleeding to death internally, while you continue to say everything is just fine.

This is not from God. God would not do this to his children. Jesus said "he that cometh unto me, I will no wise cast out." The Holy Spirit does not bear witness that this is of God. This is of man and it is wrong even to the ungodly...and it is such a good witness to the love of Jesus to all the unsaved. If you wanted to know what was "really" happening to the church body and would sincerely ask so people would not be afraid to tell you what they thought for fear of being told to find another church, as we were and Wanda was -- you would know that things aren’t just fine. But it seems the truth is not what you want, what you want is control and blind obedience and those that disagree are expendable. It appears that "freedom of speech" is also abridged in the Kittitas Assembly as people are afraid if they express their feelings they will be accused of "gossiping" and we all know what happens to those kind of people -- public humiliation and excommunication. Do you know anyone that hasn’t ever gossiped? I don’t.

I also want to say that there is not a better Christian man or qualified, dedicated Board Member than Jerry Marchel. He shows his faith by his deeds. Anyone can give "lip service", but there is not one person in this church that Jerry has not helped -- day or night he is there and not just when it’s convenient and looks good...that’s why the people go to him and elected him to represent them on the Board for the past 6 years. He shows his faith by loving and helping and not by judgment and self-righteousness. I am so thankful for men like Jerry -- for as much as being on the board means to him and no matter how much pressure was put on him to vote your way, he chose to leave the board rather than compromise his sense of righteousness or compassion for his sisters in the Lord. How dare anyone question his salvation.

How could anyone, particularly a church board, sit in judgment on anyone else without any sound evidence -- only hearsay. Because until it has been proven, that is exactly what it is...gossip and hearsay and it would seem to me that any person, especially a "Pastor", would have told anyone that came to him with something against his brother to "go to your brother and tell him, don’t tell me. And then if he doesn’t listen, come to me and I will go with you as a witness." You just don’t hear one side before you pass judgment...and that’s what you did or actually the board didn’t even hear the accusations, they just judged. Pairlee doesn’t have enough time in the world to live out the hurt you have caused her -- you maligned her character, convicted and executed and then you say you want a hearing...why bother, the damage has been done. Sounds familiar doesn’t it...seems like Jesus had one of those same hearings before those "great men" of God -- the Pharisees.

I know that I should not write this letter in anger...but God knows I’m angry, so why lie...I am so angry at what you did to our body...it will never be the same again. I think if Jesus were here, he would tell all those without sin to cast the first stone. As for me, I will take my place among the sinners, because I am one, and Jesus had more tolerance for sinners -- even the woman he found committing the act of adultery than he did for the Hypocrites in the church.

Who’s next on your list? If it’s me, I’ll save you the trouble. I want my name removed from that building’s membership...I do not want anyone to know now or down through time, that I was ever associated with such heartless cruelty. My heart has no desire to stay in a place where loved ones are callously "thrown away" with no regard for their pain or well being, and you just keep on going like they never existed. Jesus says I came to give life and that more abundantly...and the enemy comes to kill, steal and destroy. Let’s call it by name and this certainly is not life more abundantly for Pairlee and Wanda or anyone else that has any compassion or love in their heart for one another. We suffer with them. But of course, it didn’t happen to your wife or daughter, so I guess it doesn’t concern you.

Gary, if you can stand at the pulpit and tell everyone why Pairlee and Wanda "won’t be coming back to this church" without their knowledge or permission, after preaching a sermon on a son sleeping with his mother to make your point of how we must expel the immoral brother, I want you to do the same for me with my permission . . . but read my letter -- I don’t want people assuming that I too must be immoral.

Don’t bother to call me before your tribunal. I am not accountable to you.

In addition to the following books co-authored with her husband, Albert, Aimee is also the author of Broken, Yet Triumphant.

This book is more than an expose’ of one scandal, in one denomination, in part of the country. It is autopsy on the politically correct, politically powerful and politically motivated church of today.

Spiritual devastation resulting from unfaithful or flawed leadership will be poignantly declared. Truth must not be altered, watered down, or compromised.

Vigilant corrections on the road of life are essential if we would arrive at the intended goal. When our astronauts fired their rockets to blast out of earth’s gravitational pull and aimed for the moon, constant computerized navigational corrections were made to enable their orbiting the moon upon arrival. When leaving the earth, an ever so slight degree of error, would have ultimately placed the astronauts far from the gravitational pull of the moon and their desired orbit.

It is spiritual high treason for church leaders to use the "CHURCH" as a safe sanctuary from civil prosecution when committing ungodly and illegal acts. The Head of the church, Jesus Christ, with scathing denunciation rebuked the Pharisees of His day for their spiritual hypocrisy. For they self-righteously defended their own sins against God while they were quick to condemn those unable to defend themselves. God has one standard for both the church and the world. "God is no respecter of persons."

Albert and Aimee Anderson (married over 47 years) are the type of Pastors who, when they see righteous principles violated take a stand and remain steadfast on eternal and unchanging Truth. Their experience (Albert has held ministerial credentials for 51 years) has proven that "wolves" are within church structures, not just predators from outside. And, because the Andersons’ have had the courage to expose corruption, they have been caught in the crossfire of defensive officials covering their wicked deeds.

When someone with a flashlight finds a cockroach in their house, should they kill the bug or "kill the light" and let the bugs roam free? Those in authority have seen fit to squash the Andersons and try to sweep them out instead of the corruption. They have been threatened to be silent. However, they won’t be silent; conscience forbids it. They have opted to stir up dust amid powerful people who prefer things be left dusty.

Albert and Aimee Anderson heard cries of the wounded (as true shepherds do) and personally became involved in mending wounds. In so doing, they found that the price was extremely high and they became wounded.

Yes, their David-and-Goliath struggle against denominational powers (unscrupulous and unethical conduct by church officials) has taken its toll. They could have accepted an easier road, pretended not to notice, perhaps been "bought off", chosen comfort instead of sacrifice and commitment to Scripture. But for them, righteousness forbids it.