White Collar Crime in the Church 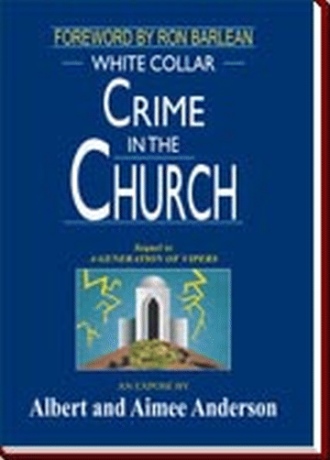 Too often the U.S. Justice System is very unjust. While in a phone conversation with a attorney from , he told me (Aimee) that the U.S. Justice Department can pretty much pick and choose which cases to prosecute. It simply boils down to how much money do you have, who, do you know, and what high profile attorney have you hired.

A recent (2003) issue of the Assemblies of God Evangel stated that U.S. Attorney John Ashcroft is an Assemblies of God member. His father was one of Albert’s teachers at in . In a public television interview, Mr. Ashcroft stated that he would uphold the law of the land. Does he have the integrity to do so if that law would mean the prosecution of one of his friends? Will power and influence affect his thinking in a negative manner or will he be just in all his decisions? This is a moral issue of right and wrong.

We discovered in January of 2003 that the grand jury cases on Rollin Carlson, Melvin Chapman, and other Care-Net Outreach personnel (including other A/G Northwest District officials) were dismissed . This was only a few months after John Ashcroft took over as our new U.S. Attorney General. This was the very same day that John McKay’s nomination as our new attorney for was confirmed by the U.S. Senate. Therefore, we decided to write to John Ashcroft and communicate our concerns directly to him.

Apparently, nothing constructive has been done concerning these cases. It appears as though the U.S. Justice Department is choosing to ignore the serious crimes that have been committed by some of our A/G Officials – the same way the A/G General Council and the Northwest District Council Officials have been taking care of the problems for years. Just ignore the serious crimes as though they do not exist! Is there too much politically at stake for both the A/G Officials and the U.S. Justice Department?

2. Is there a conflict of interest in both the A/G Officiary and the Justice Department?

3. Can the A/G officials justly investigate and justly prosecute themselves?

4. Can U.S. Attorney John Ashcroft, an A/G member who was raised in an A/G church, justly investigate and prosecute close church friends?

5. Legally, shouldn’t unbiased committees be appointed to take over conflict of interest cases?

WHITE COLLAR CRIME IN THE CHURCH is an Expose  of the ongoing miscarriage of justice and intrigue, even in the clergy. The conspiracy deepens. Others are snared into the wicked scheme of events: U.S. Justice Department, FBI, criminal division of the IRS, and others.

A portrait of where American Christianity has declined is displayed in the skulduggery of some Clergy who have become inveterate Hypocrites. Bullies in the Pulpit are trying to take over the churches of today. If possible, these Bullies who are controlled by their thirst of power and greed will rule and reign with cruel threats. They intimidate, manipulate, and coerce their followers (Bully Buddies) in order to gain absolute control.

It is apparent that people in the church with power, might, and money can be criminals and escape punishment. Maybe politics has played a role after all. Innocent people continue to suffer as victims of the heavy-handed unscrupulous techniques of the Bullies and their Bully Buddies.

District and National church officials became insidious in their hypocrisy. Church leaders who have become Bullies and Bully Buddies, a dominating and exclusive group of people, now are the Church Mafia?  They subjugate and tyrannize their subordinates.

Compromise and conflict of interest surrounding this ongoing saga has grown. In addition to the involvement of Assemblies of God Northwest District Council (Northwest Ministry Network of the AG) and General Council Officials, it now includes U.S. Government Officials who have been snared into the wicked scheme of events.

America is like a sinking ship that needs to dial Heaven’s 911 and cry out in repentance to God Almighty for forgiveness and help. In order for the Church and our Nation to be restored, some church officials/leaders need to repent and make restitution to those whom they have so sinfully injured.

Albert and Aimee Anderson (married almost 50 years) are the type of Pastors who, when they see righteous principles violated take a stand and remain steadfast on eternal and unchanging Truth. Their experience (Albert has held ministerial credentials over 53 years) has proven that “Wolves” who become “Bullies” and “Bully Buddies” (Mafia) ) are within church structures, not just predators from outside.

Albert and Aimee documented affinity group fraud, embezzlement, government food commodity fraud, insurance fraud, real estate fraud, wire fraud, mail fraud, and lying in the Assemblies of God Northwest District leadership. They have been threatened to be silent, but they won't; conscience forbids it. Thus they have been caught in the crossfire of defensive officials covering their wicked deeds.