A Commonsense Book with a Trillion Dollar Project

by You and Me 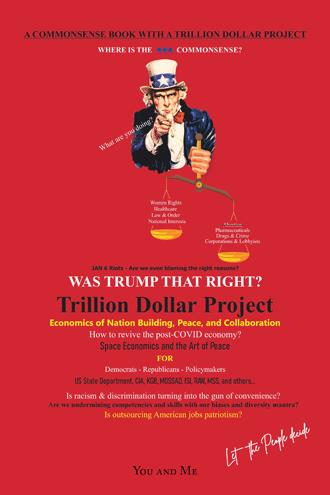 ABOUT THIS BOOK – MANDATORY READ

People who ask commonsense questions get responses like: “you don’t know behind-the-scene things,” “it is above your pay grade,” “don’t worry about this – it won’t affect us,” …. Many believe policymakers and politicians don’t have time to listen or read beyond three lines. Many think policymakers and politicians of today only seem interested in their personal ambitions.

Moreover, the excuse of national security logic and behind-the-scenes complexity gives a perfect hybrid reasoning for cover-ups to cash insecurities, biases, fears, and self-fulfilling prophecies, which flawlessly bypasses objectivity, critique, and sometimes even exempts timely accountability. Unfortunately, I feel some people try to make things complicated for their advantage, just like the case of illegal immigration. I am not against immigrants or legal immigration. The U.S. is the country of immigrants; to me, the problem is not illegal immigration; the problem is the strict implementation and enforcement of the law and lack of real consequences. If the law is properly enforced, will caravans of illegal immigrants keep coming?

To many, the majority of the top guys seem highly selfish and work for their self-interest only; moreover, many blindly follow the trend of their inner circles, careers, promotions, and photo-ops instead of standing up for the right thing. It seems that concepts like maintaining high moral grounds depend on personal preferences and for books and ratings only. Working for self-interest is not bad unless self-interests take away conscience, human compassion, and the ability to differentiate between right and wrong; attributes that distinguish humans from animals….When private monetary gains, personal job security, political affiliations, preconceived biases, and generational memories take precedence over objectivity, national interests, and ethical values, then society’s moral prism starts deteriorating, affecting institutions, and, eventually, the nation. As a result, many of my American friends seem worried about ongoing things in America and worldwide.

Many whispers comments like “politicians, policymakers, and leaders don’t really care about me,” “speeches and promises are just for ratings and show,” and “it seems things in the U.S. are deteriorating at a rapid rate.” Rumors and gossip like these should be troublesome for policymakers and politicians but are they listening, or are they in their own bubble listening to what they want to hear and listening to those they always prefer listening to.

The disconnect between our traditional policymakers, wealthy politicians, and the everyday simple, hardworking, struggling Americans is growing. To an ordinary person, it seems that the policymakers are busy giving aid and rescuing other nations. Strengthening democracies from our taxpayer’s money, but what benefits do our simple truck drivers, factory workers, and Walmart workers get? To strengthen democracies abroad, build coalitions, and put fires off globally, are we neglecting our democracy and human rights and getting more divided by the day. These perceptions indicate the growing mistrust, frustration, and lack of faith in our system. It’s a rat race, and most people never realize how greed takes away inner peace and how karma settles scores. Instead of focusing more on U.S. growth, development, and success, the new trend seems to focus more on countering rivals’ propaganda and negative tactics and trying to build others. Are others’ who we are trying to help pay taxes to the U.S. government?

Did we build peaceful and stable Iraq, Libya, Syria, Afghanistan, etc.? Did we make those countries stable or left them in more chaos? With all these efforts and help, why is anti-American sentiment worldwide on the rise and frustrations at home also increasing gradually? And at home, we identify ourselves and others more as democrat, republican, white, black, Asian, Atheist, Christian, Muslim, etc. Something seems very off to me.

Between these perceptions and discussions, pre-and post-COVID developments, and some economic concepts in mind, this book aims to bluntly talk about what people are reluctant to speak about due to the fear of political incorrectness, even if the problem is affecting them and the reasons are correct, many are unwilling to talk about the actual issues openly. Is it the economy and unemployment? Is the fight over resources to secure future insecurities, making us more insecure by the day? Is it something about securing eternity per generational religious beliefs? Is it the lack of will to enforce the law? Or are those regional, generational animosities affecting our decision-making and thought processes? Or is it just a self-centered attitude, hypocrisy, and lack of common sense?

To answer the above QUESTIONS, i.e., what is the real problem and if there are any practical solutions? This book has some commonsense analysis and concepts with recommendations for those seriously looking for practical solutions to issues that some of our politicians have difficulty solving/implementing. This book is a different type of book for everyday people and decision-makers, politicians, policymakers, bureaucrats, intelligence, and the intelligentsia, asking if we are using common sense to unconditionally uphold the basic tenants of ethics and the supreme law of the land.

Sometimes people say whatever they want to say without thinking. Sometimes, people are reluctant to say the right thing because it is politically incorrect; this paradox happens at almost every level of our society. Ego, self-interest, race, color, religion, and party affiliations dominate logic and common sense. In addition, most people seem overworked and have limited time to think deeply other than watching the news and using social media apps on the go.

Just look at the January 6 riots. I am against any riots and lawlessness, and if someone broke the law, then justice should be done. In the U.S., the U.S. Constitution is the “supreme law of the land.” However, nobody is asking this one question. Why rioters rioted? That many people cannot be crazy. Why were so many people frustrated that led them to the climax and to that riot? Is that something to do with their education, media poisoning, or not knowing what is right from wrong, or some problem with the system? There is something terribly wrong with this picture; why not first fix the problem, and address those issues that made those people feel helpless and frustrated, thus triggering their patriotic feelings and forcing them to take those extreme measures. This question and many other questions led me to write this commonsense book.

This book talks about a commonsense approach to addressing ongoing societal issues contributing to the divide in our nation. Instead of stabilizing other nations and highlighting crime, violence, and danger in foreign countries, we should focus on fixing our crime rate and violence and building our infrastructure first. With the American spirit second to none, as the world leader and blessed land with abundance, the hope for the world, and the most powerful nation with the best constitution, human rights champions, known for standing up to the tyrants, the hub of innovation with the freedom of speech, press, and religion, land of the law, and opportunities; why is our society becoming polarized with increasing insecurities and fears of the unknown? With increased security by the day, why are we more vulnerable than before? By helping the world more than any other nation, why are we hated more and have more enemies than before? So many of us are not happy with the things going around us. Are we complicating stuff by following marketing gimmicks of the mainstream media, politicians, policymakers, lobbyists, and corporations? As peacemakers and nation builders, did we make more chaos? Why are we eager to fix other nations instead of improving our nation first? Why are we trying to liberate nations that end up making more terrorists and chaos? Is this not the time to start evaluating things beyond the glitter, biases, and greed; and ask commonsense questions by making things simple as an American-American, not as a corporate hawk or a biased lobbyist, not as a Democrat-American or a Republican-American? Ultimately, a Trillion Dollar Space Economics Project concept supports and discusses the commonsense mind frame with a vision of peace, collaboration, generating tremendous employment, diffusing polarization, and reviving the post-COVID economy.

The author is a proud American with a Ph.D. in Computing and Information Systems with extensive corporate and government experience, including awards and medals for his exceptional service. His 20+ years of diverse experience in Research, Academia, Operations, Project Management, Machine Learning, and Data Analysis ranges from Management Consultant for Industrial Partners, Finance Manager of a Technology Incubation Center, Director of Operations for a Start-Up, Lead Project Manager for a Consulting Firm, and a Business Analyst for a Tech Company. His working titles also varied from Deputy Director, Academic Specialist, Assistant Professor, Economic Specialist, and Professional Associate. Furthermore, his MBA, and bachelor's degrees in Business, Economics, Statistics, and Mathematics, with some regional expertise, provided him additional credibility, insight, and firepower for a blunt and unique perspective for the compatriots and patriots.