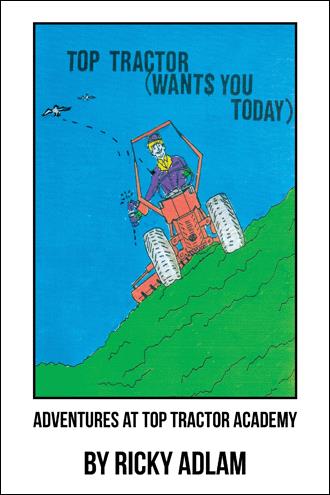 “Top Tractor II Wants You Today! - Parents, do not worry! We train for the future!”

Ricky Adlam has a Bachelor of Science in Mechanical & Industrial Engineering with a background in Electrical Technology. He has working experience as a News Anchorman, a Weatherman, a TV Comedy Writer, a Senior Aerospace Project Engineer, an Aerospace Systems Engineer, an Industrial Engineer, and a Senior Nuclear Project Engineer. He has also performed Big Band songs at numerous Mayfair Music Festivals. He played rhythm guitar as a member of the Wabash Country Band. Ricky likes to write music, screenplays, and comedy novels. He usually writes a screenplay first and then uses it to create his finished novel. Ricky’s comedy-oriented writing makes his stories fun, fast reading books, which are available as e-books and in hardcover. Adventures at Top Tractor Academy was his first creation. Following that was 12 Monkeys on a Bus, then Twitzy & Ditzy, then SOS Cruise-Lines, then House Shoes, then The Tall Man, then Return of Pitt the Pirate, then Pet Town, then STAR 999 Down, and then Coronavirus-6WKS 2D DAY. Each of his stories are unique creations on their own with no follow-up volumes. Ricky Adlam hopes that these popular unique books continue to be read by young and old adults. It should be mentioned, that as a youth, Ricky Adlam was always outside playing Baseball, Football, Basketball, Stickball, Handball and Hockey. He intends to write comedy action sports stories in the future to be placed in school and local libraries throughout the United States.