Land of the Crystal Stars: The Second Rise of Guardians 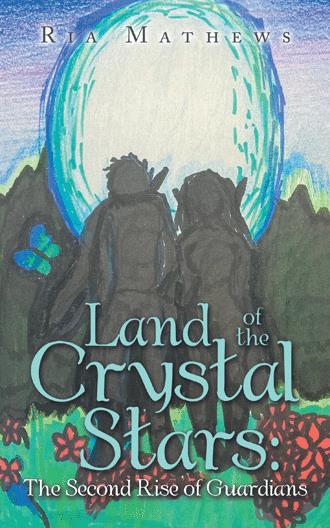 The group head out into the forest of Jade with their surroundings in mind. They also notice they could change for the weather and moving quickly as they can in the forest. The village was very small with huts as homes because of it being so hot in the forest. The three guardians could see flowers of all colors, shapes, and sizes. Some flowers they have never had a chance to look at even in their own mine. This place was very pretty; too bad the Dark Kingdom Zodiac had its claws in it already for the past 10 years. The three guardians could feel the power of the Dark Kingdom as they move through the forest. They knew it would be any time they notice their powers as well. As the guardians was looking around, they notice some things where no different than those they have seen in books. It was as if the writer had been here before, but they were not aware of the realms being connected. Sue could open a portal anywhere if she knew what it looked like. As the group kept walking in the shadow of the trees for shade from the blazing sun it felt cooler than it did when they first step into the Wind Realm. As they walked the started to wonder about whom Rich was and how he grew up in a small village with the interest in the Temple of Emerald. “Rich can you tell us about yourself?” Sue asked. “Yeah, it would pass time by. What do you want to know?” Rich said. “Well, who are your parents?” Sue asked. “I never got to know my mother because she passed away after childbirth. My father died about 10 years ago around the same time the Darkness came to this world.” Rich said. “Oh; sorry to hear that. Do you have any family left?” Sue asked. “No, I am the only one left out of my family.” Rich said. “How did your father die 10 years ago?” Lola asked. “He died saving me from my Great Aunt and Great Uncle who ruled this realm. My father was next in line for the crown because my aunt and uncle could not have children. So, I have royal blood running through my veins but when they agreed to work with the Dark Kingdom Zodiac and tried to kill my father and me. That is when my father gave his life for me. I have been on my own every sense.” Rich said. “How old are you?” Sue asked. “I am 17 years old. The village people took me in as one of their own and I worked for everything I have. The reason for that was because my father was good friends with the Chef of the village.” Rich said. “WOW! You are a year older than us.” Joey said. As the group walked and kept talking about how the Dark Kingdom Zodiac took overruling the realm and how Rich survived all these years without any real family to help him. The three guardians were wondering who the guardian of the Crystal Star of Wind was. They did not sense any powers when they enter the realm from the beginning and was wondering if there was even a guardian to this realm anymore. As they walked through the forest, they started to sense something evil in the air. “Hold on something is here and it doesn’t belong here.” Rich said. As Rich held out his hand to stop the three guardians from walking any further, they started to sense the evil of the Dark Kingdom Zodiac. “Rich this is not what you think it is. It is the Dark Kingdom Zodiac. We sense when they are near to us because we are reborn guardians of the Majestic Star Kingdom.” Joey said. “What is a guardian?” Rich said. “They are sworn to protect the star princess and the prince which is to rule the Majestic Star Kingdom. We as guardians help them in ruling the kingdom by keeping the peace among all the Crystal Star Realms.” Sue said. “I see so you are like bodyguards for the kingdom.” Rich said. “Yeah, but it is more than that. We are also friends with each other, and we care, and are pure at heart, just like you.” Lola said. “Well, I am no guardian because I have no powers to speak of.” Rich said. “Well, there has to be a guardian on this realm.” Joey said. “Whoever it is I don’t know. Is that that you are looking for?” Rich asked. “Yes, we are also looking for a way to the next realm and what realm that might be.” Sue said. They were wondering when the attack will come from the Dark Kingdom Zodiac. As they are walking through the forest of Jade as things started to go wrong. The path was over running by plants, and some what they could see this is a dark spell the Dark Kingdom Zodiac has cast to keep the people from going any further to the temple. “It would seem we have some lost kittens.” Mystery voice. “Who is there?” Rich asked. “None of your business young man. We only have business with the three guardians you travel with. Also where do you think you are heading?” Mystery voice said. “What do you want with us?” Sue asked. “We are to stop you from finding any more guardians. As well as finding your star princess and prince.” Mystery voice said. “Who are you?” Lola asked. “We are the generals of the Dark Kingdom Zodiac.” Mystery voice. “What are your names?” Joey asked. “We are the Gemini twins our powers range from control over the dark earth and dark winds. Our names are Pearl and Jem.” The Gemini Twins said together. “Dark Wind I call you to me.” Pearl called. “Dark Earth I call you to me.” Jem called. 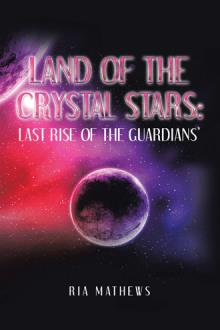 Land of the Crystal Stars: Last Rise of the Guardians’
Ria Mathews
£15.95

This is the Crystal Star of the Fire Realm has a breathtaking view; it is quite beautiful. It looks like fire living when the flowers blow in the wind. There are tulips, red roses, red daisies, and gardenias. They two had stepped out of the portal into a field of flowers. I think that we should stay here for the night until the fighting slows or comes to a stop.” Sue suggested. “I agree with you. It is one hell of a view. I never imaged that the Fire Realm was so beautiful in its own way. Then we can begin our search for the first of the 8 guardians in the morning. Let us go ahead and set up the tent from the rack sack that we brought with us. We can set up the camp before setting off first thing in the morning.” Joey said.

The reason the author writes is because she loves to read and want those in the world to experience the world of the guardians as she has written the story and let their imagination to the limits. To show that even young children to teens can enjoy a book about guardians, powers, good vs evil, love can bloom even in the hardest of places. She wants the readers to escape reality even if is only for a little while. It also gives the readers a chance to experience a whole different world from their own.