A COLLECTION OF POETRY 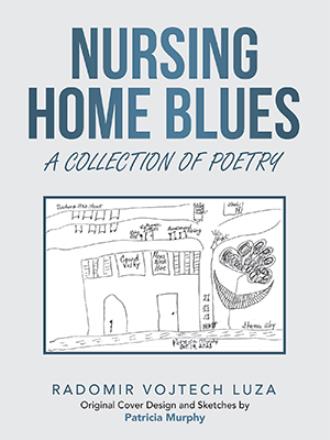 This light, this sword, this sabre, this Great White Shark, this grand collection of poetry, then, eats its way through any hole or depression. It is the sun to the disappearing moon, Jupiter to Mars, living in paradise not behind bars. Written in and around Grand Valley Healthcare Center, the nursing home in Van Nuys, CA where Luza has spent the last ten or so months, this landmark autobiographical poetry collection embraces the pain, suffering, frustration, longing and suicidal tendencies that come with a true artist's imprisonment in one of these facilities. So, freedom chained, love aborted and harmony molested, here he is swinging for any fence he can find. If the questions are: Why is human kind on earth? Where did we come from? What does it mean to be human? Then, NURSING HOME BLUES has the answers spiritually, philosophically, metaphysically, emotionally, intellectually and psychologically. Tomorrow is a blue dawn, yesterday a red maple and today a green meadow. This tome is a buffet for poets and a cornucopia for writers and thinkers alike. Do not put it down!!

Radomir Vojtech Luza was born in Vienna, Austria in 1963 to prominent Czech parents. His sister Sabrina is fourteen-and-a-half-months younger. The veteran SAG/AFTRA/AEA union actor, stand-up comedian, improvisational performer, host, creative non-fiction and fiction writer and disc jockey has been the poet laureate of North Hollywood, CA since 2012. The Pushcart Prize Nominee (2012) is the author of 35 books (31 collections of poetry) including three other tomes he has published this Summer: LOSING ME: POEMS FROM BED 23C put-out by Spectrum Publishing in Pasadena, CA and winner of the 2021 San Gabriel Valley Poetry Festival Book Contest; COPPER CARNATION, a poetry collection from Author House in Bloomington, IN and ONYX ROSE, a collection of poetry and prose published by Christian Faith Publishing in Meadville, PA. The theatre, film and book critic (atthetheatrewithRadomirLuza.com) wonders why if he can write, record, publish and introduce four books and two powerful syndicated radio interviews in a place like Grand Valley Healthcare Center, the nursing home in Van Nuys, CA where he has spent the last nine months, why other artists in better environments cannot construct more creative lenses which with to view their future through. The Tulane University and Jesuit High School graduate (New Orleans, LA) is also the winner of the Irwin Award for "Most Creative Collection of Poetry" (Book Publicists of Southern California) for EROS OF ANGELS, his 2016 400-page magnum opus. The longtime sportswriter and freelance journalist has had poems published in over 75 literary journals, anthologies, websites and other media. The Catholic of nearly 50 years has had his poetry featured over 110 times nationwide. The 1983 New Orleans Catholic Youth Organization Man of the Year third-place finisher has curated, organized and hosted over 15 reading series across the country in places such as New York, NY; Jersey City, NJ; Hoboken, NJ; Fort Walton Beach, FLA and Los Angeles, CA. The Topps trading card and Fanatics sports apparel collector is the editor and publisher of the literary journal, VOICES IN THE LIBRARY, published by Red Doubloon Publishing, the literary arm of Radman Productions.